The team behind the "March" graphic novel trilogy at Comic Con 2016.

John Lewis called for a revolution with his 'March' graphic novels. It's time we answer

Andrew Aydin is creator and co-author of the award-winning and New York Times bestselling graphic memoir series "March," about the life and civil rights work of Rep. John Lewis. The trilogy is illustrated by award-winning graphic novelist Nate Powell, whose forthcoming book, "Save It For Later: Promises, Parenthood, and the Urgency of Protest," will be published in 2021. The views expressed here are their own. View more opinion at CNN.

(CNN)How does an icon reinvent himself? And how does he do it at 70?

Creating a graphic-novel memoir with the explicit goal of making nonviolent revolution attainable and urgent was audacious, but the late Rep. John Lewis took that risk with us, alongside us and precisely because he knew the stakes.
We're still in awe of his trust in us to tell his life story, including his willingness to risk being brushed off and laughed at for this choice of medium and format.
'John Lewis: Good Trouble'

CNN Films' documentary chronicles the life and career of the legendary activist and Georgia congressman. Watch on CNN Saturday, October 3 at 10 p.m. ET.

Interviewers often asked us, "Why a graphic novel?" The truth is that "March" was always a comic, starting with Andrew's initial vision after Congressman Lewis described 1957's buried but influential "Martin Luther King and the Montgomery Story." Across 14 pages, the comic book explains the philosophy and discipline of nonviolent social resistance through an illustrated recounting of Rosa Parks, Dr. Martin Luther King Jr. and the Montgomery bus boycott. Comic books at the time were widely demonized, considered by some to be a corrupting influence -- but having witnessed the inspiration "Montgomery Story" gave young activists, including himself, Lewis knew comics' potential. He saw the format as the most democratic and accessible mass medium, one that enabled anyone to express an idea with basic, inexpensive tools and reach a broad readership across educational, class and language barriers. 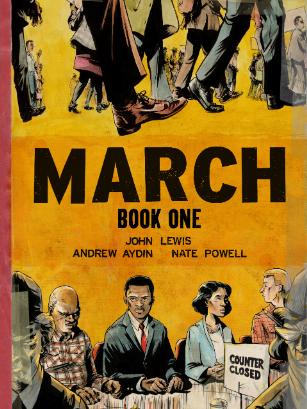 He was also conscious of the role the Internet played in creating a new literacy among young people. Words a