In 1963, a young John Lewis arrived at the March on Washington for Jobs and Freedom prepared to excoriate the Kennedy administration, which many racial justice activists viewed as lacking moral resolve in its approach to civil rights. The speech was so damning, though, that other leaders asked Lewis to tamp it down.

But even after a thorough edit, Lewis’ words demonstrated how radical the civil rights movement truly was. Lewis and his peers didn’t just want to desegregate public spaces and acquire voting rights; they wanted to disrupt an entire system, knowing that Black Americans couldn’t be free in a country afflicted by unchecked police violence.

This “serious social revolution,” as Lewis put it, is still unfolding 57 years later. 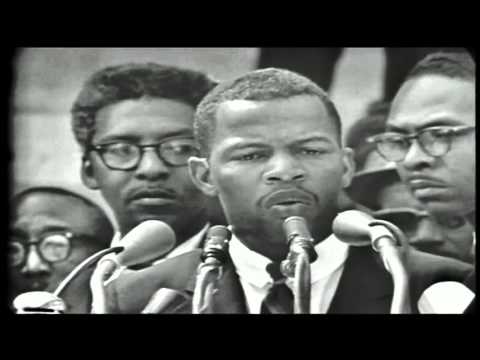 Martin Luther King Jr.’s soaring “I Have a Dream” speech, delivered from the steps of the Lincoln Memorial to some 250,000 people, often overshadows the words that Lewis spoke at the rally. But Lewis’ speech is known as the more blistering of the two, especially considering that “the boy from Troy,” Alabama, was only 23 years old at the time.

“We come here today with a great sense of misgiving. It is true that we support the administration’s civil rights bill,” said Lewis, who that year had been chosen to serve as the chairman of the Student Nonviolent Coordinating Committee. “We support it with great reservation, however.”

The source of this reservation was the fact that Title III, designed to grant the federal government the authority to rein in (among other things) police brutality, hadn’t been included in the proposed legislation.

“Unless Title III is put in this bill,” Lewis told the crowd in Washington, “there’s nothing to protect the young children and old women who must face police dogs and fire hoses in the South while they engage in peaceful demonstration. In its present form, this bill will not protect the citizens of Danville, Virginia, who must live in constant fear of a police state.”

Police state. The America of 2020 tends to remember Lewis as a champion in the fight for access to the ballot, given his role in helping to secure the passage of the Voting Rights Act of 1965. But as the above words illustrate, the late congressman was also an early exponent of fundamentally curbing police terror.

As Margaret Burnham, a professor at the Northeastern University School of Law, wrote after Lewis’ passing in July, “But for a short revival after the Sixteenth Street Church bombing (in 1963), Title III would never get out of the committee rooms.”

On Sunday, police in Kenosha, Wisconsin, shot Jacob Blake, a 29-year-old Black man, multiple times as he tried to enter an SUV. According to the veteran civil rights attorney Benjamin Crump, Blake had been trying to break up a fight. (Currently, Blake is in the hospital. An investigation into the officers’ conduct is underway.)

Protests against police violence have been erupting in Kenosha since video of the shooting began circulating on social media earlier this week. They coincide with similar demonstrations taking place in Lafayette, Louisiana, where last Friday police fatally shot Trayford Pellerin, a 31-year-old Black man, outside a convenience store.

The backdrop of all this is the ongoing public condemnation of the police killings of Breonna Taylor, George Floyd and Rayshard Brooks; the abiding anger over the Trump administration’s decision to send militarized forces to terrorize Black Lives Matter protesters in Portland, Oregon; and the continuing debate over whether it’s possible to shake off the poison of police abuse without defunding the department that’s long nourished bad cop behavior.

“If we don’t have the systematic reform that this moment in America is crying out for, then we are going to continue to see hashtag after hashtag, protest after protest, and cities burning all across America,” Crump said.

Fury is in the ether. And the uprisings flashing and flaring across the country echo Lewis’ emotional posture – his stirring refusal to wait for equality – at the 1963 rally.

“We are tired. We are tired of being beat by policemen,” the civil rights leader said, defiantly, 57 years ago. “We are tired of seeing our people locked up in jail over and over again, and then you holler: ‘Be patient.’ How long can we be patient? We want our freedom, and we want it now.”

It was this clear need for justice that fueled Lewis to participate in decades of “good trouble,” his phrase for the nonviolent protest he engaged in from his youth right up to his death in July. As a society, we’re so readily taught about Lewis and his peers’ efforts to dismantle segregation that we often miss the reality of how revolutionary these activists were – both in the scope of their rebuke of America’s sins, and in the scope of their vision for building a better world.