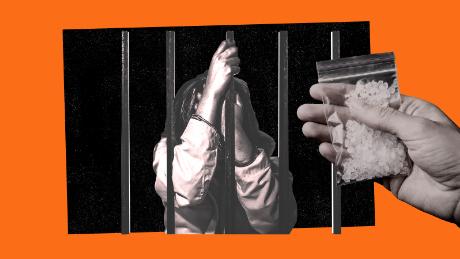 By Preeti Jha, for CNN
Illustration by Gabrielle Smith, CNN

The 21-year-old Indonesian's bag was put into the security scanner and she remembers agreeing to be searched.
By the time officers had slashed open the lining of her backpack and dislodged the white crystals concealed inside, Yuni said she knew she'd been tricked.
Yuni is not her real name. CNN is using an alias because the former accused drug trafficker, now aged 23, wants to move on with her life.
Back in 2018, hours before her flight, her new boss had given her a padlocked bag in the Cambodian capital of Phnom Penh. She says the middle-aged Nigerian man, who she knew only as Peter, claimed it was "just clothes" and promised to pay her $1,000 if she took it to Hong Kong.
Read More
But she never saw Peter again. The crystals turned out to be 2kg of methamphetamine, worth $140,000 when the haul was seized.
At that moment, Yuni became one of tens of thousands of women caught up in Asia's punitive drug wars. She was arrested in Hong Kong on suspicion of drug trafficking, a crime carrying up to life imprisonment in the city, and execution in other parts of the region.
An overlooked consequence of Asia's drug wars is the outsized impact they have had on women.
Today, jails in East and Southeast Asia hold the world's biggest proportions of female prisoners. In many nations, the majority are incarcerated for drug offenses: 82% of women in Thai prisons are jailed for this and in the Philippines that figure is 53%.
<!--[if