Taylor Swift has been on quite a journey in recent years – going goth on “Reputation,” pivoting to loved-up sugary pop on “Lover,” and finding her political voice in between – but her newest, toned-down offering “Folklore” is resonating with critics and fans more than any of her releases to date.

Swift announced the surprise album on Thursday, and it was released worldwide hours later.

If that muted rollout was an unexpected turn for a superstar whose previous efforts have been heavily promoted for months, the end product was nothing short of shocking. “Folklore” is more mellow, restrained and mature than Swift’s previous offerings, delving into darkness on more than one occasion.

But the early notices are glowing – with some publications calling it her greatest work.

“Her emotional acuity has never been more assured,” the Guardian wrote in an adulatory five-star review. “It’s hard to remember any contemporary pop superstar that has indulged in a more serious, or successful, act of sonic palate cleansing,” Variety added.

“‘Folklore’ feels fresh, forward-thinking and, most of all, honest,” NME opined.

And Billboard gushed: “A project created in isolation, Folklore finds Swift pouring every inch of her current psyche, amidst an imperfect reality, into her songwriting. We’re fortunate that she decided to share it with us.”

In isolation my imagination has run wild and this album is the result. I’ve told these stories to the best of my ability with all the love, wonder, and whimsy they deserve. Now it’s up to you to pass them down. folklore is out now: https://t.co/xdcEDfithq

The album, which Swift said she developed during lockdown, boasts 16 delicately crafted tracks that occasionally rumble into ethereal soundscapes but never explode into the carefree, bubblegum pop that made the singer a star.

“Before this year I probably would’ve overthought when to release this music at the ‘perfect’ time, but the times we’re living in keep reminding me that nothing is guaranteed,” Swift said ahead of the release. “My gut is telling me that if you make something you love, you should just put it out into the world. That’s the side of uncertainty I can get on board with.”

Her soul-stirring new sound perfectly reflects the months of isolation that both Swift and her fans have experienced – and her supporters were every bit as rapturous as the critics. “Once again Taylor Swift’s proving why she’s one of the best songwriters in this decade,” was the conclusion of one superfan on Twitter.

“This whole album sounds like the old books in a forgotten library started singing their stories out loud to people who can’t come to take them anymore,” another theorized.

English singer Maisie Peters was full of praise too, writing: “happy folklore day my favourites are this is me trying, betty and invisible string and peace is her best ever song. this is also her best ever album.”

“i would die for taylor swift,” was Halsey’s concise take. And Australian star Alex Lahey wrote: “This @taylorswift13 record is unbelievable. Thank you for inspiring us all in such an uninspiring period of humanity.”

i would die for taylor swift

The album opens with “The 1,” a contemplative track that considers an alternative life with the one who got away, and closes with “Hoax,” a second-person lament about a broken relationship.

“If my wishes came true, it would’ve been you,” Swift admits in the opener, prompting inevitable debate about just how autobiographical the song is.

“You have beaten my heart. Don’t want no other shade of blue but you … no other sadness in the world would do,” she sings as she closes out the album.

Swift has been in a relationship with British actor Joe Alwyn, which she beamed about on “Lover” last year – even boasting about an ill-planned day trip through London with him on “London Boy” – but fans speculated in online discussions Friday if her lyrics indicate a break-up.

In another track on the new album, “Epiphany,” Swift appears to nod to the human impact of the coronavirus pandemic, singing: “Something med school did not cover, someone’s daughter, someone’s mother. Holds your hand through plastic now. ‘Doc, I think she’s crashing out.’”

The album was released alongside a video for “Cardigan,” which shows Swift getting lost in a dark “Alice in Wonderland”-esque adventure, climbing into her piano for safety from a swirling storm. 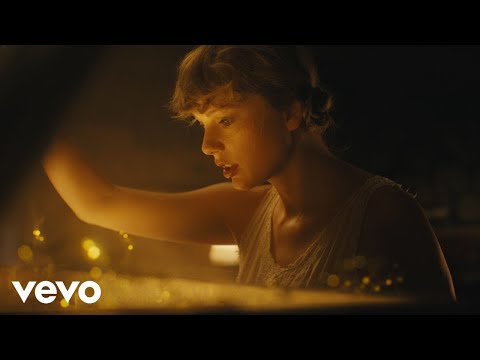 Much of her fans’ attention was fixed on “Exile,” a slow-build duet developed and sung with indie-folk stalwarts Bon Iver.

“exile isn’t just a song by taylor swift, it’s a lifestyle, a reason to breathe, an escape from this cruel world filled with thieves,:” a fan wrote on Twitter. “it’s art, the first gift you open on christmas, a hug from a loved one, everything you’ve ever wanted, everything you need.”

And Billboard bestowed the same compliment on “Invisible String,” calling it “a sensational love story centered on the happy accidents that will get you choked up if you let them.”

Model Martha Hunt commented that “folklore is the indie album of my dreams,” and American singer Ashe added: “I remain increasingly impressed by Taylor Swift’s ability to make me cry on a moment’s notice.”

Swift even swears a handful of times in the record, including in its very first line – something on which a number of fans commented.

The singer has stayed semi-quiet in 2020 since the release of her Netflix documentary, “Miss Americana,” in January. But Swift is still one of the biggest stars in pop – and she apparently doesn’t need much fanfare to turn heads.