The director-general of the World Health Organization has condemned a “lack of leadership” in fighting the coronavirus pandemic and made an emotional plea for global unity, as cases soar in multiple countries and the world struggles to contain the devastating virus more than six months after it was first identified.

“My friends, make no mistake: The greatest threat we face now is not the virus itself,” Tedros Adhanom Ghebreyesus said in a passionate speech in Geneva on Thursday. “Rather, it’s the lack of leadership and solidarity at the global and national levels.”

His intervention will be seen as a thinly veiled swipe at leaders including US President Donald Trump, who has waged a public battle against WHO while failing to suppress the world’s worst Covid-19 outbreak in his own country.

“This is a tragedy that is forcing us to miss many of our friends, losing many lives. We cannot defeat this pandemic as a divided world,” Tedros said, his voice trembling as he spoke.

The US is regularly reporting single-day record rises in cases and topped three million confirmed infections earlier this week, throwing its early attempts to reopen the economy into chaos.

The situation is almost as bleak in other regions. Brazil’s President, Jair Bolsonaro, has contracted Covid-19 after playing down its severity for months.

India announced its biggest single-day rise in cases on Thursday, and the spread of the virus is picking up pace in Mexico.

Australia, hailed as an early success story in the fight against the pandemic, has been forced to seal off more than 6 million people in the state of Victoria after a renewed surge in the disease in Melbourne.

“How is it difficult for humans to unite to fight a common enemy that’s killing people indiscriminately?” Tedros asked during his plea, made during a WHO meeting. “Are we unable to distinguish or identify the common enemy? Can’t we understand that the divisions or the cracks between us actually are the advantage for the virus?”

He urged a coming-together of global powers, telling attendees: “Covid-19 is a test of global solidarity and global leadership.”

Tedros’ words come days after the Trump administration told Congress and the United Nations that the US is formally withdrawing from WHO. 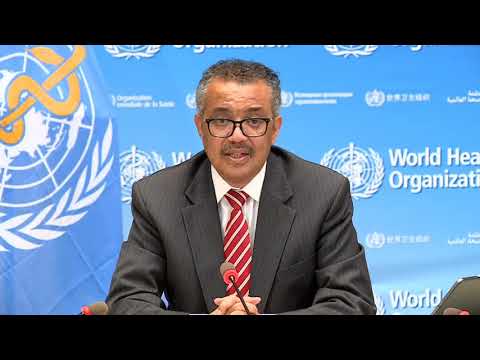 The withdrawal, which goes into effect next July, has drawn criticism from bipartisan lawmakers, medical associations, advocacy organizations and allies abroad. Presumptive Democratic presidential nominee Joe Biden vowed Tuesday to reverse the decision “on (his) first day” if elected.

Tedros himself has drawn the ire of the US President, who has accused the organization of being too China-centric and failing to contain the pandemic in its early days.

But the leaders of virtually every other major nation, including Germany, France and the UK, have stood by the agency during the crisis.

And on Thursday, German Chancellor Angela Merkel said the pandemic has exposed the dangers of “fact-denying populism” around the world. “We have seen lies and disinformation, and that is no way to fight the pandemic,” she told the European Parliament in Brussels.