The idyllic game where players can design their dream island has taken off since its March launch, selling 5 million digital copies in that month alone, according to Nielsen’s SuperData, which analyzes the gaming industry. During the pandemic, people have held Animal Crossing weddings and even bid co-workers farewell. US Representative Alexandria Ocasio-Cortez, an avid gamer, has visited families in the game.

As much of the world remains wary of visiting beaches and swimming pools because of the pandemic, the video game provides a virtual way for swimmers to dive for mollusks and sea critters. 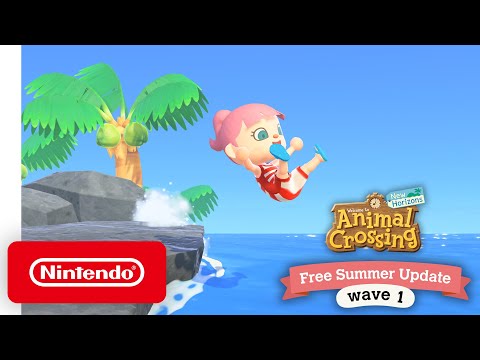 Prior to Friday’s update, a character that tried to walk toward the water would hit an invisible barrier. Now when you move your joystick over the waves, your character can swim and dive. The creatures you collect can be donated to the museum curator Blathers, an owl sporting a bow tie.

You can also swim to collect scallops, which can be used in DIY recipes to craft mermaid-style furniture in your humble abode. “Animal Crossing: New Horizons” lets you craft furniture by collecting wood, iron and other resources.

To swim in “Animal Crossing,” players will need to own a virtual wet suit, sold at a shop within the game for digital currency.

As part of the update, Gulliver, an adorable seagull who washes ashore at odd intervals on the Animal Crossing beach, is now dressed as a pirate. He will have a quest for players who will receive a “special reward” if it’s completed.

For lapsed players of the game tired of running errands across their tropical islands, the July 3 update might be enough incentive to log back on.

“Since time flows naturally in ‘Animal Crossing: New Horizons’ like it does in the real world, the game is always changing,” Nintendo America told CNN Business in a statement. “By providing updates throughout the year, Nintendo hopes that these events will keep players engaged all year round.”

Animal Crossing is getting another summer update in early August, according to Nintendo.