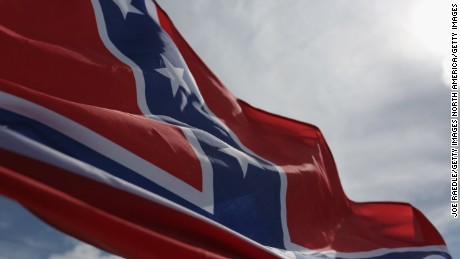 First, let's clear up a common misconception: The crimson and blue flag we usually refer to as the Confederate flag is in fact a Confederate battle flag, most famously used by Gen. Robert E. Lee's Army of Northern Virginia.
The actual flag of the Confederate States looks a lot different: It has two red stripes and one white, with a familiar field of stars on the hoist. There were four iterations throughout the Confederacy's short life, with each one bearing different numbers of stars to correspond to the number of Confederate states at the time.
Read More
The famed phrase "Stars and Bars," however, usually refers to the original Confederate flag, designed in 1861, which has seven stars arranged in a circular pattern. This is an important flag to remember as you look at some current state flag designs.
Here's something else to remember: Flags, as a national symbol, are a relatively new invention. Marc Leepson, a historian and author of the book "Flag: An American Biography," explains that, up until the last few hundred years, flags and pennants were used most widely for military purposes. (Another fun fact, Leepson notes: The United States had an official national flag years before France. The US adopted its first version in 1777, while France didn't adopt one until 1794, during the French Revolution.)
"For the first third of our nation's history, from about 1777 to 1861, it was almost unheard of for individual Americans to fly the flag. It was mostly flown primarily by the government, mainly by the military, and especially by the Navy," he says.
Ironically, all of that changed when the Confederacy was formed, and with it, an enemy flag. Suddenly, American flags cropped up in and around Union homes, schools and businesses -- and the practice extended nationwide in later years.
"When the Confederacy broke away, one of the first things that the Confederate Congress did was pick a flag," Leepson says. "There was a big debate, and the debate centered on how close the flag should look to the American flag. They held a contest, and took votes, and what did they do? They picked a flag with red and white stripes and stars."
That proved difficult later on in the war. According to Leepson, during the especially foggy battle of Manassas in 1861, Confederate commanders realized it was hard to tell the two flags apart. Eventually, various iterations of the battle flag became more widely used.
As you look at the different flags below, here are some things to note: The arrangement of stripes on the field, the types and placement of stars, and what is going on in the canton -- the upper left part of a flag where you would normally see the fifty stars on an American flag. Also pay attention to the presence of a saltire, or St. Andrew's Cross. That's the diagonal "X" that defines the Confederate battle flag. (It's also a part of many other flags around the world, including the Union Jack.)

Since the St. Andrew's Cross is a widely used symbol, it can be easy to mistake Alabama's flag design as mere coincidence.
However, according to the 1915 Alabama Official and Statistical Register, the flag "was intended by the [state] Legislature to preserve in permanent form some of the more distinctive features of the Confederate battleflag, particularly the St. Andrew's cross." This origin is also cited by the Alabama Department of Archives and History.

Though the Arkansas flag is, overall, a visual cousin to the Confederate battle flag, it was actually designed in 1912 by a young woman from the town of Wabbaseka. According to a state historian's description of the flag, the diamond represented Arkansas' diamond mine, and the three stars inside represented the three nations the state had belonged to: Spain, France and the US.
It wasn't until 1923 that a Confederate reference was added. State lawmakers voted to add a fourth star to the inner diamond to represent the Confederacy. The following year, they changed it so the star representing the Confederacy was over the state's name -- and the other three below it. This may be news to most budding vexillologists, but it's a well-known fact among Arkansans. As recently as 2019, state lawmakers have introduced bills attempting to strike the reference from the flag.

Before 1899, Florida's flag was just its state seal on a background of white. That year, voters agreed to add a red St. Andrew's cross to the flag which, again, could be chalked up to coincidence. But the change was first proposed by then-Gov. Francis P. Fleming, a staunch secessionist who fought in the Confederate Army's 2nd Florida Regiment and was very active in Confederate veterans groups after the war.
Controversy over the flag bubbles up in Florida from time to time, although historians disagree over whether the cross was meant to call to mind the Confederacy. Some posit it could be a reference to the flag of the Spanish Empire, known as the Cross of Burgundy.

In the years since the Civil War, Georgia's flag has undergone several changes. Yet, it still looks very, very much like the flag of the Confederacy -- on purpose. It used to contain a Confederate battle flag on its fly (the free side of the flag), a design change that was made in 1956.
Why add such a problematic symbol? According to a 2000 state Senate report, compiled while Georgia was mulling another flag change, the decision to add the battle flag came during the 1956 legislative session when state lawmakers were intent on "preserving segregation, resisting the 1954 US Supreme Court decision of Brown v. Board of Education of Topeka, and maintaining white supremacy in Georgia."
The flag was eventually changed in 2003 after then-Gov. Sonny Perdue gave voters the choice between a drastic, deeply unpopular redesign proposed in 2001, and a new proposal closely resembling the "Stars and Bars." Government materials confirm the connection: On the Georgia Secretary of State's site, the current flag is described as being "based on the first national flag of the Confederacy."
The fact that Georgia citizens chose to add a Confederate sym