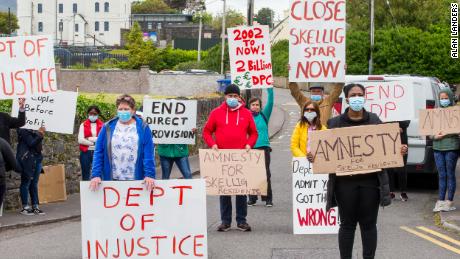 Amid the pandemic, a group of asylum seekers was moved to a small, rural Irish town. Then they started testing positive for Covid-19

(CNN)Misha was living in a hotel in a leafy suburb of Ireland's capital city under the country's controversial asylum seeker accommodation system when a letter arrived.

She had been waiting months for a decision to be made on her asylum status. But the letter wasn't about that.
Misha, and dozens of other asylum seekers at the Dublin hotel were notified that they would be moved to a rural town over 200 miles away, on the west coast of Ireland, due to concerns over Covid-19 spreading through the accommodation, which was also shared by paying guests. She had less than 24 hours to pack her things.
When she was transferred to the Skellig Star accommodation center in Cahersiveen, County Kerry, on March 18, she was hopeful it would be safe. But, after arriving and being told to bunk with another asylum seeker she didn't know, she began to fear the worst.
"I was scared for my life," said Misha, who asked that her real name not be used for fear it might impact her asylum claim.
Read More
About 100 people in total were transferred from a handful of centers, including from one Dublin hotel where a guest from Italy had reportedly contracted the virus.
Just days after they arrived, one of the residents started showing symptoms, according to three people CNN talked to. Then the rumors started.