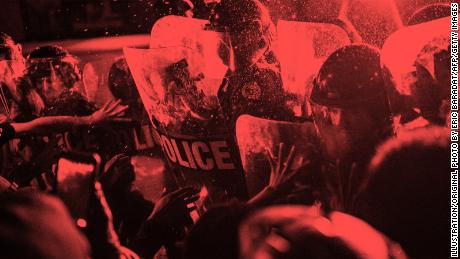 That's the message from many of the protesters who have filled American cities for nearly two weeks, demanding justice for the death of George Floyd and seeking to end a litany of police killings of black Americans.
The protests have rippled across the United States and throughout the world, with activists streaming through the streets of many capital cities in solidarity with the movement.
Floyd was just one of the many Americans killed by police officers each year. But in other developed countries, such incidents are rare.
Statistical comparisons show that police in the US typically shoot, arrest and imprison more people than similarly developed nations.
Read More
Each nation listed below either accompanies the US in the G7 group of the world's most advanced economies, or is ranked similarly on global wealth, freedom and democracy indexes. But when it comes to policing and criminal justice, the US is a noticeable outlier, and black Americans are disproportionately affected.
Data on arrests, deaths and prison populations do not exist uniformly across developed countries, so it can be difficult to pinpoint exactly how the US fares in comparison to every nation. For instance, it is impossible to know exactly how many people die at the hands of police officers in the US each year: no single, nationwide database that contains such information exists.
"We can't have an informed discussion, because we don't have data," former FBI Director James Comey told the House Judiciary Committee in 2015. "People have data about who went to a movie last weekend ... and I cannot tell you how many people were shot by police in the United States last month, last year, or anything about the demographics. And that's a very bad place to be."
We are therefore forced to rely on estimates -- but even they paint a stark picture.
A media review by the Bureau of Justice Statistics (BJS) found a total of 1,348 potential arrest-related deaths in the ten months from June 2015 through March 2016 -- an average of 135 deaths per month, or just over 4 per day. (The review excludes deaths under the jurisdiction of federal and tribal law enforcement, and the BJS acknowledged it does not provide a complete picture.)
By comparison, only 13 people in the UK died in or following police custody in the closest time period, according to the country's police watchdog. In Australia, 21 deaths occurred in police custody or custody-related operations in 2015/16. Those measures are the most accurate comparison to the US's figure of arrest-related deaths, according to the UK Home Office. The UK's figure does not include every death that occurred following police contact.
American police also