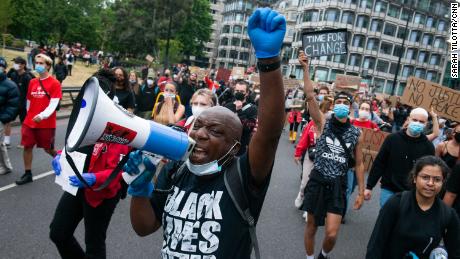 Activist Gary McFarlane, 59, leads chanting protesters as they march through central London on Wednesday, June 3, to demonstrate against the death of George Floyd in Minneapolis, Minnesota.

'The UK is just as bad as America'

London (CNN) -- The police killing of George Floyd has resonated around the world. In London — some 4,000 miles from where Floyd died in Minnesota — thousands of protesters gathered on Wednesday to show solidarity with mourning Americans.
It was a peaceful Black Lives Matter demonstration in Hyde Park, where protesters of many different racial and cultural backgrounds chanted Floyd's name through their face masks, demanding justice. Several protesters shared their outrage over the killing to CNN, drawing parallels with their own experiences, and expressed dismay about US President Donald Trump's reaction to the protests.

Geovane Silva, who works at a McDonald's and studies music.
"There's racism everywhere, and we have to fight it. I don't just mean white people against black people. Racism is racism, and that's what we have to fight. We have to be just one, human beings, we just need to be one. We all breathe the same air, we all bleed the same color.
"When I saw what happened to George Floyd, I cried. Man, I cried, because someone is being killed for just looking like me. He did nothing wrong, absolutely nothing wrong, and even if he did, there's ways to deal with that. Why do other people get ways to deal with that but we don't? The only way to deal with us is through violence. Why? We are not savages, we are not animals — we are people, like everyone else, and we deserve to be free.
Demonstrators raise their fists while observing a minute of silence during a demonstration for George Floyd outside the Houses of Parliament, on Wednesday.
Read More
"We can't have people being scared when reaching for their wallets in their car. We can't have people being scared when they are raided at home by the police and being killed. We can't have people being scared of being on the street, not doing nothing, just standing on the street and the police come and finds a reason to shoot you and to kill you and to take your breath.
"It's not the first time. Five years ago we were yelling the same thing — 'I can't breathe.' Why do we still have to do it today? It makes no sense. How can this still be? Why can't people understand we are one? Why so much hate?
"This is way bigger than just America, it's way bigger than George Floyd. It's way bigger than just one cop killing a black man — it's about injustice."

Cleo Charlery, who studies social work, and her sister, Carla Charlery, 22.
"I tried to avoid watching the George Floyd video, but it got to a point where I couldn't, so I looked and I felt so broken. I felt enraged with anger. I have a daughter, my partner's black, I've got black siblings. It could have happened to anyone, any of my family members, so I was enraged with anger. I cried, then I started sharing everything I felt on social media.
"I'm tired of it. I'm tired of everyone screaming 'black lives matter'— come on, this is common sense now. We are equal, just like everyone else. We should be, do you understand? We should have rights like everyone else. But it appears in America, and in the UK, we have no rights when it comes to justice.
"The difference is, I feel in the UK they know how to hide it pretty good, while in America, no one cares. They'll let you know they're racist. They don't care about it. Where in the UK everyone is hiding it, but it comes out unconsciously, so I think that the UK is just as bad as America.
"In terms of Trump. I'm so tired of him. I feel like he's gaslighting the entire situation and calling a war on black people."

Kingsley Daniels, who works as a musician and a chef.
"I'm not protesting just for me. I'm thinking about the future, for the next generation. My kids, our grandkids, trying to make sure they can do whatever they want in life, and not have prejudice against them. Not have to work 10 times as hard as a white man, just to get a job they didn't know they deserved, that they put blood sweat and tears into.
"I want my kids, anyone's kids, any black men, black women, anyone who wants to do anything with their lives, that they can do it. They don't have to worry about prejudice, or worry about 'If I walk out of the house, am I going to make it home tonight? Can I go to another country to see what it's like? If I do, will I make it home?'
Protesters move between stopped buses and cars as the demonstration moved through central London.
"One of my dreams is to end up in New York and work there for a living. But now I have to put that on hold and think carefully because I don't want to go out there and not make it home. So I'm doing t