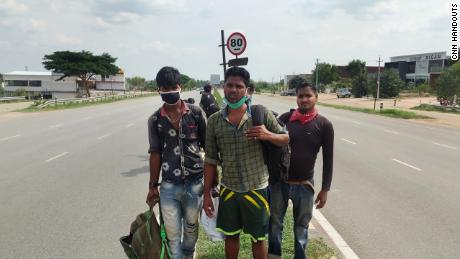 Chouhan moved to Bengaluru last December to work as a mason on a construction site.
In his home village of Tribhuvan Nagar, on India's border with Nepal, he earned 250 rupees ($3.30) a day. In Bengaluru, he could double that.
He and his brother, who worked in another state, sent home about 14,000 rupees ($185) a month -- enough to sustain their family of 11, including Chouhan's two young children and his elderly parents, living in a thatched roof house set amid sugarcane and wheat fields. His nephew Arvind Thakur joined Chouhan in the city as soon as he turned 14, the legal age to work in India.

A video of Rajesh Chouhan's house. 11 people share this space. "When it rains, we get wet even inside the house"

By the time Chouhan, his nephew and nine other migrants from their hometown had decided to leave Bengaluru, the country had been shut down for weeks. Some rail services resumed on May 3, allowing interstate travel -- but only subject to a laborious approval process.
Migrants were told to register their travel plans at police stations. By May 5, more than 214,000 people had registered to leave Karnataka state, of which Bengaluru is the capital. However, barely 10,000 people got tickets as there was limited train service.
Normally Chouhan pays 300 rupees ($4) for the 48-hour trip home in the lowest carriage class, but during the pandemic that price soared to 1,200 rupees ($15.90). State police were assigned to sell tickets and keep order at police stations packed with travelers desperate to get home.
Police in Bengalore told CNN they resorted to using batons to clear the crowds when sales for the day ended. "We were beaten many times. Just because we are poor, doesn't mean we can't feel pain," says Chouhan.
After spending five days outside a police station trying to get a ticket, Chouhan and his fellow villagers decided to walk. They didn't dare tell their families.

"We were beaten many times. Just because we are poor, doesn't mean we can't feel pain."Rajesh Chouhan

"My father is severely diabetic and it would take a toll on him and my mother if they found out that we were walking home with no money," Chouhan says. "They'd cry until our return. All of us decided to tell our families that we were waiting for a train."
He packed four shirts, a towel and a bed sheet in his backpack, along with a couple of water bottles. In his wallet was 170 rupees ($2.25).
At 3 a.m. on May 12, Chouhan slipped out of the single-room tin shed he shared with 10 other people and took his first step towards home. 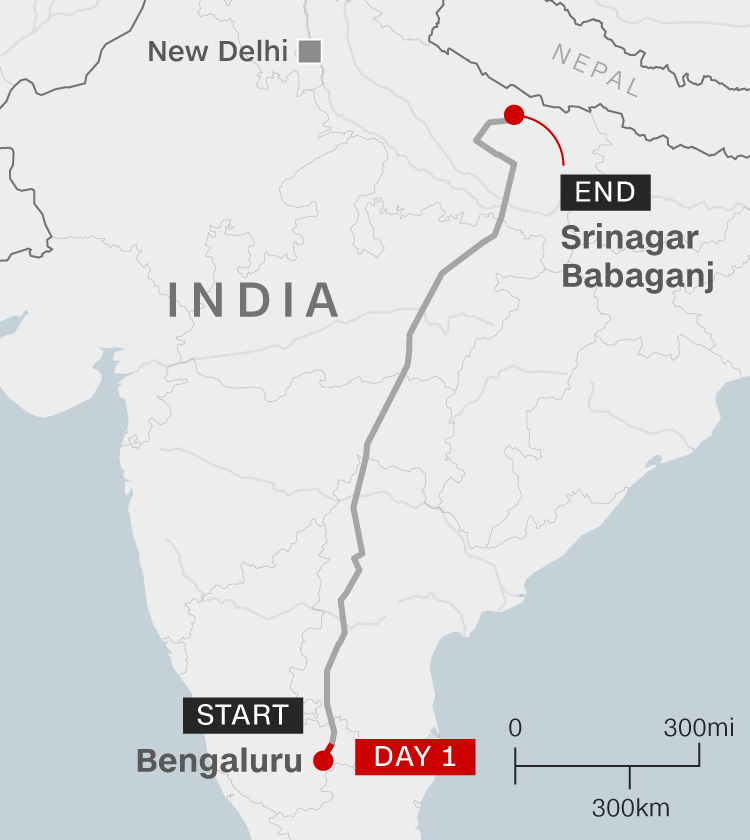 By the time Chouhan left, police checkpoints had been erected across the city. Authorities had not anticipated the rush of migrants wanting to leave and clarified that registration applied only to those "stranded" -- not migrant workers. Unauthorized interstate travel was banned.
As Chouhan's group walked across the city, they were picked up by police and taken to the station where their boss -- who never wanted them to leave -- would pick them up. While migrant workers have rights under Indian law, often they are unaware of them and exploited by employers.
At noon, police officers changed shifts and the group was left unattended. "We ran out of there," Chouhan says. "We ran for two kilometers or so until we felt we were safe."
Migrant workers wait to board buses during the coronavirus lockdown in Bengaluru on May 23, 2020.
Following railway tracks to avoid police on the roads, the group walked through the night, with other migrants, until they entered Andhra Pradesh at 1 a.m.
After 46 hours, they had crossed the first of the five state borders they would encounter. They had traveled just 74 miles (120 kilometers).

Chouhan's group of 11 migrants had nine smartphones between them, and they used Google Maps to navigate their route. They used the flashing blue dot to see if they were roughly walking in the right direction.
To conserve battery power, only one person would have their phone switched on at a time, and they took turns sharing GPS. There were few places along the way where they could charge their phones.
The first part of their journey traced National Highway 44 -- a long, open road that slices India neatly in two, running the length of the country from Tamil Nadu in the south to Srinagar in the north.
Volunteers distribute food to migrants on National Highway 44.
This road would take them to Hyderabad, the city of 10 million people that was to be the first big landmark of their journey -- and where they'd heard it would be possible to hitc