When Kendall Neff tasted the pizza she ordered from a local shop in her town of Phoenixville, Pennsylvania, she thought it tasted very familiar.

She had never heard of Pasqually’s Pizza & Wings when it appeared as an option on Grubhub, but she figured she’d give it a shot.

“I was just searching for something that wasn’t a chain,” Neff told CNN, noting that she wanted to support local businesses during the coronavirus pandemic.

But after a bit of investigating, her suspicions were confirmed. The pizza wasn’t from a mom-and-pop restaurant, but from Chuck E. Cheese. Yes, that Chuck E. Cheese, the one filled with arcade games, sweaty children and unexpectedly fresh-made pizza.

A quick glance at the address confirmed it. The delivery guy did, too; he said Pasqually’s even had its own sign in the window.

In fact, a cursory glance around Grubhub, Seamless, and Uber Eats, revealed the partnership is widespread — from the Bronx to Los Angeles, dozens of listings for Pasqually’s have been popping up nationwide since late March — all with the same address as a local Chuck E. Cheese.

A Chuck E. Cheese spokesperson told CNN it wasn’t an attempt to trick anyone. The brand is wholly separate, the spokesperson said, the two just share the same kitchen space.

The spokesperson described Pasqually’s as a “delivery-only brand operating on its own, leveraging the operational infrastructure of Chuck E. Cheese kitchens across the nation.” And while Pasqually may be recognizable to Chuck E. Cheese aficionados – he’s the chef in Munch’s Make-Believe Band – CEC said the delivery brand offers “a different pizza,” which the company described as “a more flavorful, more premium pizza experience.” 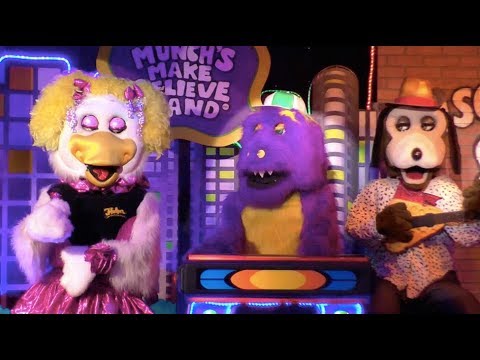 The pizza playhouse isn’t the only one setting up alternate shops.

CNN was able to confirm that the address for a “Rotisserie Roast” in Philadelphia matched the address of a Boston Market, and the new “Neighborhood Wings” in Folsom, Pennsylvania, Columbus, Indiana, and Yonkers, New York, all matched local Applebee’s locations.

Some of America’s chain restaurants have quietly set up shop on several of the leading food delivery apps, using different names but selling from the same well-visited locations

A trend in the industry

A Grubhub spokesperson told CNN what some major chains have done is permitted on their platform. In fact, the practice has a name: “virtual kitchens” or “virtual restaurants.”

“Delivery-only virtual kitchens on Grubhub — or from other food delivery companies — have been a rising trend over the last year, representing a flexible way for restaurant owners to experiment with new menu concepts, brand a subset of existing menu items, or capture unmet customer demand without adding overhead,” the spokesperson said. “This is especially true for small, independent restaurants that offer many of the virtual kitchens on Grubhub.”

But with more Americans stuck at home turning to app-based food delivery during the pandemic, larger enterprise brands have gotten in on the trend.

“The trend has also extended, although to a lesser degree, to larger restaurant brands eager to try out new concepts,” the spokesperson said.

All that Grubhub asks is that the new virtual restaurant offers a different menu than the brick-and-mortar restaurant, the spokesperson said.

Uber Eats has a similar request.

Interested in setting one up? Uber Eats even offers a helpful article for that.

“Creating a Virtual Restaurant through Uber Eats lets restaurant owners host a separate restaurant concept within an existing brick and mortar restaurant on Uber Eats,” it says. And while “each Virtual Restaurant has a unique name, listing, and endorsement in that app,” it always links back to the physical restaurant. “This way, your customers will always know where their food is coming from,” the article states.

Chains hit hard across the US

Like the rest of the restaurant industry, casual dining chains have been hit hard by the pandemic.

Chuck E. Cheese, which has been closed minus carry out and delivery since March, had to furlough over 65% of its support center personnel, according to a report filed to the Securities and Exchange Commission.

While the first quarter is usually the busiest quarter for the company, Chuck E. Cheese reported an 18% decrease in quarter-to-date sales through March 26 this year compared to the same comparable period for last year.

Applebee’s comparable same-restaurant sales also dropped 10.6% for the first quarter of 2020, according to a news release.

A way to try out new menu items

Applebee’s and Boston Market both offered a similar explanation as Chuck E. Cheese’s statement, saying that Neighborhood Wings and Rotisserie Roast are a way for the companies to try out new menu items.

“The direct connection to Boston Market is visible in all online ordering apps and on our packaging as our Rotisserie Roast concept advertises ‘Crafted by Boston Market’ on the logo,” Randy Miller, president of Boston Market, said in a statement to CNN.

The logos for Neighborhood Wings and Rotisserie Roast.
Applebee's/Boston Market

Rotisserie Roast has “new and modern takes on classic Boston Market menu items that are only available with Rotisserie Roast like custom sauces for an extra boost of flavor, fresh quinoa rice, and a hand-crafted roasted zucchini and tomato sandwich,” Miller added, noting that the company will determine if it wants to expand to additional markets based on feedback at its Miami and Philadelphia test restaurants.

The launch of Neighborhood Wings by Applebee’s was rolled out over the past four to six weeks and is now available in nearly 750 restaurants nationwide, according to Scott Gladstone, vice president of strategy and development at Applebee’s.

“This virtual restaurant allows guests to get their Applebee’s wings fix and gives us the opportunity to test out new items made for wing lovers that aren’t on our main menu. For example, the new Honey Pepper Sauce wing flavor and the ability to order higher wing increments (up to 60 wings!) are options only available through Neighborhood Wings by Applebee’s,” Gladstone said in a statement to CNN.

While Applebee’s virtual restaurant is listed on Grubhub as just Neighborhood Wings, its logo says “By Applebee’s” in small letters.

Owner of one local business says it’s not fair

Pasquale Presa, owner of Pasquale’s Neighborhood Pizzeria, said it doesn’t seem fair to local businesses for chain restaurants to be operating under a different name — especially if that name mirrors yours.

Presa’s restaurant may be located just two miles away from a Chuck E. Cheese in Rochester, Minnesota, but — until recently — it had no connection to the giant cartoon mouse.

Now, he says he’s received dozens of calls and messages from customers who accidentally ordered from Chuck E. Cheese’s Pasqually’s instead of his restaurant.

“I think what they’re doing especially in my little market is wrong because you have an authentic Pasquale’s pizzeria and then (Chuck E. Cheese) came out with this,” Presa told CNN. “I understand that everybody is trying to survive (during the pandemic), but they’re tricking the consumer saying that there’s a new restaurant, not knowing that it’s an Applebee’s or Chuck E. Cheese.”

But, as they said, the companies wouldn’t call it a trick – it was a move was done with consumer interests in mind.

“This new brand is the latest example of CEC Entertainment creatively adjusting to meet the needs of consumers in a unique way, allowing for more variety and convenient options available for delivery,” the Chuck E. Cheese spokesperson said, referring to the restaurant’s parent company.

Added Gladstone, the Applebee’s executive: “While the concept has been in development for months, our recent model shift to an only off-premise business was a great opportunity for us to launch and further serve our guests.”