Grateful to have since recovered, DJ Jazzy Jeff recalls the worst illness of his life

Fly in, spin some music and get large crowds of people dancing – that’s what DJ Jazzy Jeff has done for years. But after battling what he said was the worse illness of his life, he’s now focused on getting other people to play it safe during this pandemic.

“I’ve had the flu before, and I’ve had pneumonia before. As sick as I was, I have never been that sick. So, there was no doubt in my mind that I had Covid,” the legendary turntablist – who goes by Jeff Townes when not performing – told CNN in a recent interview, although he was never able to get tested.

It was early March – before any of the states had enacted stay-at-home orders and before most Americans knew that Covid-19, the highly contagious and deadly virus, was already sweeping through the country. A venue in Ketchum, Idaho, booked Townes to headline a party on March 6 to cater to visitors to the ski town in scenic Sun Valley. He flew in on a Thursday and deejayed the party the next night.

“I didn’t go out of my room at all. I literally sat in the room and sorted music, made some music and just took it as a day of relaxation,” Townes said. “And I even remember the green room where they had me was in the basement. I walked on stage, didn’t have to come in contact with anyone and when I walked off stage, I might have given three high-fives before I went to the dressing room.”

When he finished playing, he said he had just enough time to go back to his room and shower before returning to the airport and flying home.

But while Townes was busy giving partiers memories to take home with them, he likely picked up something as well. No one knew at the time that a coronavirus outbreak was infecting dozens of people in the area, including some members of the National Brotherhood of Skiers – several of whom returned home, became ill and ultimately died due to Covid-19.

A few days after his return home to Delaware, Townes and his wife, Lynette Townes were shopping when they learned that actors Tom Hanks and Rita Wilson had tested positive for coronavirus while in Australia and that the NBA was canceling the rest of the season.

That’s when it hit him.

“I looked at her and I said, ‘I don’t feel so well,’” Townes, 55, recalled. He said his health rapidly spiraled. He lost his sense of smell and his ability to taste – side effects many people who have battled coronavirus have also noted.

“I started hallucinating. I would go to sleep and could swear that I slept for 12 hours and I would wake up and I had been asleep for six minutes,” he said.

At one point, he opened his eyes and his wife was staring at him. “She said, ‘as long as we’ve been married, I know how you sleep. … I know how you breathe, and this isn’t it’,” Townes remembered. His wife took his temperature and then demanded that they go to the doctor.

At first, he got a flu test then he got a chest X-Ray. He said he was told he had pneumonia in both of his lungs, was given antibiotics and told to go to the emergency room if he felt any worse. With testing just rolling out at the time, he wasn’t able to get a test for Covid-19. He battled his illness at home.

“That was probably the toughest four days I’ve ever had,” Townes said. “I can honestly say I had one or two times that my brain started going down a really dark path that I was like, ‘I have been blessed to live a great life and travel and do what I do. I cannot believe this is how I’m going to go out.’”

Then someone reached out to Lynette Townes to ask if her husband was feeling okay since several people who had also been in Sun Valley – including at the party where he had deejayed – were now fighting the coronavirus. At this point, Townes hadn’t told anyone he was sick.

Townes was starting to get better, he said, but then his wife spiked a fever and lost her sense of taste and smell. Her illness was much milder than his, he said. But when Delaware announced it was declaring a state of emergency starting March 13, the family decided to quarantine in their home – and had Lynette Townes’ mother join them.

“The thing that really got me upset is my mother-in-law got sick and she got really sick,” Townes recalled. “Then I started thinking like, as soon as I came back from Ketchum, I went to go visit my mother. She’s 92 with asthma. And then I started thinking, ‘Oh my God, I could’ve gotten my mom sick. Who else did I get sick?’”

Thankfully, he said, their kids and his mom did not get ill. His wife and her mother have recovered.

“Because I can’t really pinpoint or go back in the past, I just think it’s very important to talk to people, to express how important it is to just keep your social distancing. Stay in the house!” he said. “It is absolutely amazing the amount of people that are out just completely ignoring this and, unfortunately, I can’t because I know how sick I got.”

Townes has returned to what he does best – rocking crowds to the music he plays – but from his home via social media, where he constantly encourages people to stay home. “Hope everyone’s staying safe!” he recently said to his Instagram Live audience.

I did a quarantine concert with DJ Jazzy Jeff! 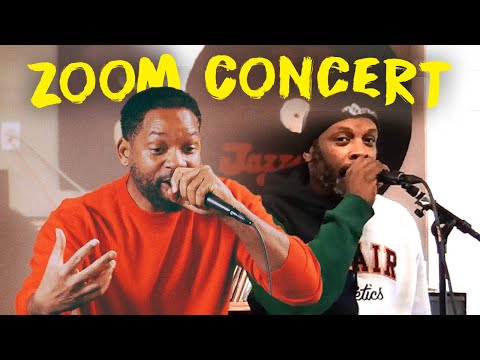 Eventually, he would like to get an antibody test to confirm he truly did have Covid-19. But first he has to get over his fear.

“I am absolutely terrified to go out of the house,” Townes said, recalling how the first time he headed out was more than a month after he fell ill. He and his wife were on their way to the store. “I was two seconds away from telling her to turn around and take me back because of my anxiety being so bad because of, you know, the unknown.”

That unknown he said is whether or not he could still get someone sick or if he’s already gotten the virus, could he still get sick again?

“I’m terrified because I don’t want anybody to go through what I went through,” Townes said. “So it’s just kind of like, ‘I need you to understand whether you feel in excellent condition or not, you need to heed the warning because, you know, you might not be sick, but you may be a carrier.’”

After rising to fame with Will Smith, Townes has traveled the world to play music to venues packed with people. In fact, the day after Christmas last year he embarked on a six-week tour of Australia, New Zealand and Asia. The idea of a trip like that in the future now seems far-fetched.

“I don’t think it’s just my future. I think people really need to understand that what we’re going through right now, I believe that 60% of this is our new norm,” Townes said. “I don’t know how many handshakes people are going to be giving.”