Tom Moore, the 99-year-old war veteran raising funds for the UK’s National Health Service (NHS) by walking 100 lengths of his garden, has completed the challenge and raised more than £12 million ($15 million) in donations.

Moore walked the last 10 lengths of his garden on Thursday morning, aided by a walking frame.

Soldiers from the 1st Battalion Yorkshire Regiment gave Moore a guard of honor as he completed the final lap. 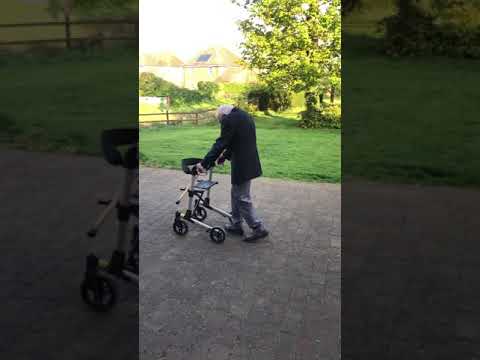 Moore began the fundraiser on April 8, initially hoping to raise £1,000 for NHS Charities Together, which raises funds for UK hospitals, including for staff, volunteers and patients affected by the coronavirus crisis.

Captain Tom Moore is raising funds for the NHS by walking laps of his garden.
Courtesy Hannah Ingram-Moore

War veteran, 99, raises $6 million by walking laps of his garden

Ellie Orton, chief executive of NHS Charities Together, said Moore was a “true inspiration” and thanked those who had donated.

“What he has achieved in bringing people together, and highlighting the appeal, has been remarkable,” Orton said in a statement.

Originally from Yorkshire, northern England, Moore now lives with his daughter, son-in-law and two grandchildren in Bedfordshire, southeast England, following the death of his wife in 2006.

Moore, who will turn 100 later this month, trained as a civil engineer before being enlisted in the British Army during World War II, where he served in India, Indonesia and Britain. He later became the managing director of a concrete manufacturer.

“He has served his country in the past and he’s serving his country now,” Hancock told BBC Breakfast TV Thursday. “We all need a bit of cheering up sometimes.”

Moore’s daughter, Hannah Ingram-Moore, told CNN earlier this week that her father had been exercising daily following a recent partial hip replacement and she suggested he challenge himself to do it daily in order to raise funds.

Ingram-Moore told CNN that her father was “a hard worker and a grafter” and that he had been “floored” by the donations.

In a statement from the UK’s Ministry of Defence, Maj Ian Atkins, officer commanding the troops in the guard of honor, said: “The soldiers, standing apart and yet together in support of Captain Tom, couldn’t be prouder to count him as one of their own, and we thank him from the bottom of our hearts for his service to the country, and now his achievements in the name of the NHS.

“The British Army, the NHS and the whole nation has been behind him every step of the way.”