YouTubers bought thousands of toilet paper rolls a few months ago. They just gave them all away for free

Two YouTubers in Colorado Springs just came to the rescue of hundreds of people who hadn’t been able to find toilet paper because of coronavirus-induced shopping hysteria.

Among their antics last October was buying all the toilet paper – about $5,000 worth, enough to fill a moving truck – from a Target store to construct a giant castle fort. They also handed out some rolls for free during a “toilet paper pop up shop.”

GIVING AWAY TOILET PAPER FOR FREE! 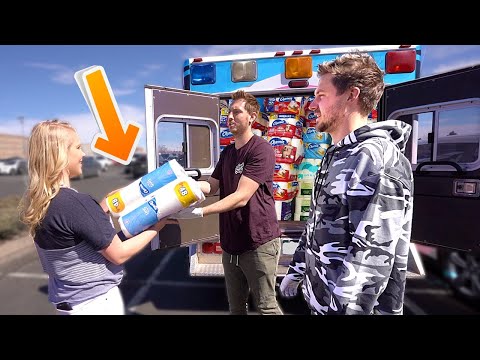 But there was plenty left over.

Then, coronavirus struck, and so did the pair’s inclination toward kindness.

First they stopped by senior living homes, then gave away more toilet paper to store employees and strangers in store parking lots.

“We’ve had the toilet paper stashed in our warehouse for months,” Scites told CNN. “Once the virus broke out and everyone went ham over toilet paper, we were like, holy cow, we have an insane amount that we can just give out because people can’t even buy it. It was a no-brainer for us to give them away.”

The two made a video of their day. Some grateful strangers nearly cried, while others shared stories of their families’ struggles.

A grateful recipient gets the gift of toilet paper from Scites and Stuart's stash.
Courtesy MoreJStu

“If we had done this idea, like, three months, people would have looked at us like we were crazy,” he said. “But after giving it out now, people were on the verge of tears, telling us we saved their families. It was really unexpected, but it was awesome to be able to bless people that way.”

The best part of the idea, he said, was the joy they brought to peoples’ lives at a time when happiness can be hard to find. Scites and Stuart are now encouraging others to find their own way of spreading happiness to their communities in the midst of the crisis.

“People are just looking for something to have hope in. Who knew just giving someone an extra pack of toilet paper can bring up peoples’ spirits,” Scites said.

“If you have an opportunity to make people smile, you should do it.”