A campaign is taking off on Twitter to hold a show of appreciation Sunday night for health care workers on the frontlines of the battle against coronavirus.

#Solidarityat8 asks people to go on their balconies or open their windows and doors at 8 p.m. and cheer, clap or just make some noise to honor the people who continue to work in hospitals, clinics, nursing homes and other medical facilities.

Doctors, nurses and other medical personnel are being called heroes for their dedication as they continue working in increasingly dangerous conditions – with masks and other protective gear in short supply.

The many faces of health workers around the globe fighting coronavirus

The movement began in other countries that were affected by coronavirus before the United States.

In India, people in several cities blew into conch shells, cheered, rang bells and banged on pots and pans to express their gratitude to hospital staff members and first responders.

President Ram Nath Kovind and senior ministers from Prime Minister Narendra Modi’s cabinet stood in their respective courtyards in the capital, New Delhi, on Sunday, showing their appreciation with a standing ovation.

Residents in cities across Turkey cheered and whistled Saturday night for their health care workers. According to the World Health Organization, Turkey has 670 cases of coronavirus, including nine patients who have died.

This transmission electron microscope image shows SARS-CoV-2—also known as 2019-nCoV, the virus that causes COVID-19. isolated from a patient in the U.S., emerging from the surface of cells cultured in the lab. Credit: NIAID-RML
NIAID-RML

Israelis applauded from their balconies and windows Thursday night to show their appreciation for their health care workers. Israel has 712 cases, including one death, according to the WHO.

Israelis Support the Medical Community Around the World 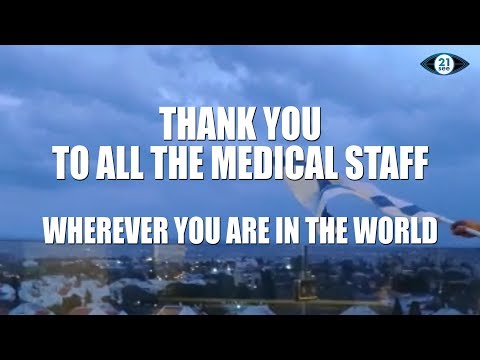 Many residents of Paris have cheered and clapped for their doctors and nurses several days in a row. France has 12,475 cases of Covid-19, including 450 deaths. The government has paid for hotel rooms for homeless people who have been diagnosed with coronavirus but don’t need hospitalization.

These are the faces of some of the US coronavirus victims

In the US, some people have already begun their show of solidarity for the nation’s health care workers. The Troy Police Department in New York – a state that has been especially hard hit by coronavirus – tweeted its support.

Healthcare Professionals near and far have always deserved our support, and now more than ever. TPD is appreciative of all those on the frontlines fighting the spread. #SOLIDARITYAT8 @SPHPnews @TroyCityHall pic.twitter.com/ZlsGXGzWCg

Actor Taye Diggs and singer Neil Diamond are among the celebrities encouraging people to take part in a show of support Sunday night.

Thank you healthcare workers, first responders, supermarket employees, food service and utility workers, delivery drivers and everyone out there who is on the frontlines to keep everyone safe. We applaud you!!! 👏🏼👏🏼👏🏼👏🏼👏🏼👏🏼👏🏼👏🏼 #solidarityat8 #saferathome pic.twitter.com/g8COCSOiYA

Many people are calling for the tribute to be repeated every night.