“Joe Biden leads with his heart. He has the compassion and toughness to lead on gun safety,” Giffords said in a statement Wednesday morning. “I’ve witnessed him comfort the survivors of gun violence, and I’ve seen him fight for solutions to gun violence—and win. This is the leadership we need in the White House. Joe Biden is the choice for a gun safety president.”

In a video announcing her endorsement, Giffords said, “He was there for me, time and time again. He will be there for you too.” 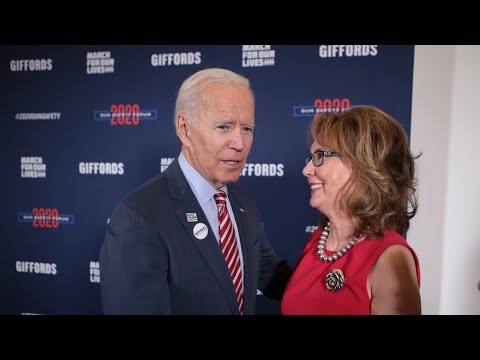 Biden thanked Giffords for her support, calling her an “American hero who embodies the courage and tenacity we need to take on and defeat the gun lobby.”

“I have been proud to work alongside Gabby in the fight to end gun violence and am honored to have her support today,” he said in a statement. “Gabby’s leadership and organization have pushed meaningful and lasting change across the country, winning hard-fought progress and making our communities safer.”

The endorsement from the former congresswoman, who is a co-founder of the gun violence prevention group Giffords, is the latest in a string of endorsements from gun control groups and comes ahead of the Arizona primary next week. Biden is steadily moving toward the Democratic nomination, getting important wins Tuesday in the Michigan, Mississippi, Missouri, and Idaho primaries.

Biden’s gun control plan, which he released in October, aims to tackle urban gun violence with an eight-year, $900 million program that would go toward efforts to combat shootings in 40 cities with the highest rates of gun violence. The plan would force owners of assault-style rifles to either sell their firearms through a voluntary buyback program or register them with the federal government under the same law that was first used to strictly control sales of machine guns in the wake of the gangland shootings of the 1920s and ’30s.

Giffords will join the former vice president at a gun safety rally in Miami on Monday.

This story has been updated to include additional information and reaction.