CPR has improved, here’s what to do (and sing) to save a life

It only takes two hands to save a life.

Your two hands, pushing strongly on the chest bone in a regular beat, can take the place of a heart that has stopped.

In essence, you become the heart, pumping valuable oxygen-rich blood to the brain and all of the vital organs, slowing the countdown to death.

Using olive oil instead of these foods could add years to the life of your heart, study says

“The chance of survival goes down by 10% for every minute without CPR,” said Dr. Comilla Sasson, vice president of the American Heart Association’s Emergency Cardiovascular Care department. “It’s a 10-minute window to death in many cases.”

A heart attack occurs every 40 seconds in America, and heart disease is the number one killer of men and women around the world. Therefore, it’s quite possible that you or a loved one will witness a cardiovascular event one day and be called upon to preserve life.

“We know that if you can start putting your hands on the chest and do compressions right away, it extends that 10-minute time interval,” Sasson said. “It pushes it back, and buys that person more time for help to arrive.”

Despite the fact that cardiopulmonary resuscitation, better known as CPR, may well be the difference between life and death, a good many of us fail to act quickly when we see someone collapse.

We waste precious minutes, perhaps due to confusion or fright about a lack of knowledge or experience.

Even worse, many fail to act at all, especially if the victim is a woman, minority or socioeconomically disadvantaged. There are studies to prove it, like one done in Denver, where Sasson practices.

Women as a whole are also less likely to be given CPR by a bystander. It’s not just a fear of being inappropriate by putting one’s mouth on her mouth, nor a fear of putting hands on a female chest. Instead, Sasson says, people are more likely to believe that a woman is only fainting or perhaps collapsing from low-blood sugar, anxiety or some other “female” issue.

That indecision has appeared time and again on recordings of 911 calls.

An egg a day may be fine for you after all, a new study says

“I listen to some of these phone calls,” said Sasson, “and they take some five minutes to actually get to the point where the dispatcher realizes, ‘Oh my gosh, this woman is in cardiac arrest!’ ”

That’s why the American Heart Association stresses using a simple, direct choice of words when you call 9-11: “Heart stopped. I need help.”

To overcome those hesitations, the American Heart Association began promoting a “hands only” approach to CPR in recent years. Because research has found that in the seconds before a heart stops, the person takes a big deep breath and fills their lungs with air, you no longer have to do mouth-to-mouth resuscitation immediately.

“The most important part of CPR to do immediately is the chest compressions,” Sasson said. “Those pushes are really what helps push the blood around the body.” 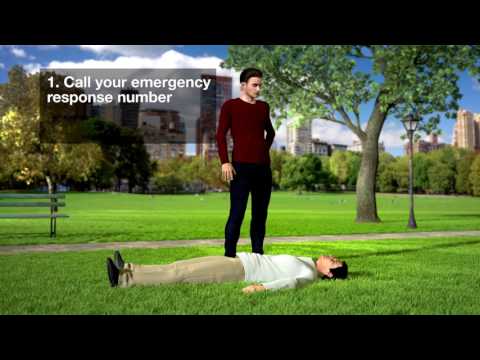 It’s simple too: Just put the heel of one hand on the breastbone of a collapsed man, woman or teen, put the other hand on top of the first and begin to press down hard and fast.

How hard? You want the breastbone to go down at least two full inches in an adult or teen –a bit more is ok, but not less. Same goes for kids, unless they’re very small. In an infant you’ll use two fingers, and press about an inch to an inch and a half, Sasson says.

Not sure how fast to go? Check out this Spotify playlist of songs with rhythms between 100 and 120 beats a minute. Lady Gaga fans can give CPR while singing “Poker Face” or “Just Dance.” Bruno Mars devotees can help to the beat of “Uptown Funk” or “Grenade.”

A Justin Timberlake enthusiast? “Can’t Stop the Feeling” is your CPR jam. Drake addicts can use “One Dance” and “Hold On, We’re Going Home;” Janet Jackson devotees can try “Rhythm Nation;” while country fans can use the cadence from Blake Shelton’s “All About Tonight,” Luke Bryan’s “Country Girl (Shake it for Me)”, Rascal Flatts’ “Summer Nights” and the classic “Ring of Fire,” by Johnny Cash.

Use the heel of one hand and cover with the other. Some suggest interlacing the fingers as well.
Shutterstock

That’s fast – and probably harder to do than you might think, which is why the American Heart Association is driving CPR vans full of mannequins to cities and setting up kiosks in major airports where travelers can drop by and practice to learn what it feels like.

“It only takes 90 seconds to learn it,” Sasson said. “But ultimately we always want people take a full CPR training course and learn how to do the breaths along with the compressions, because we know that at the end of the day, full CPR is what saves the most number of lives.”

After all, that last gasp of air a dying person takes as their heart stops can only last so long. Compressions are supposed to be done along with additional air supply.

It’s actually simple, too. After about 30 chest compressions, tilt the person’s head back, pulling up the chin and opening the mouth. Make a seal with your lips around the outside of the mouth and blow two, good, deep breaths.

Cutting salt likely to prevent future heart disease, even if you're not at risk now

“A high quality breath given with a good seal around the mouth will cause a chest rise,” Sasson said. “You’ll see the chest go up so you’ll know that you’re doing it right.”

You’ll need assistance, Sasson stresses, so if there is someone there with you, this is a good time to do some “on-the-job” training.

“Let’s say somebody answers your call for help, but says they don’t know how to do it,” she said. “Tell them ‘Watch me for two minutes, and then I’ll kind of tag out, and let you go back in and you can try it for two minutes.’ “

Another to-do: Try to find an AED, or an automated external defibrillator, housed in a big yellow box. Many major buildings and businesses have one, typically attached to a wall.

“Many times a person’s heart stops because they have an electrical disturbance, either ventricular fibrillation or ventricular tachycardia,” Sasson said.

“The AED walks you through everything, literally from the moment that you open the box,” she continued. “A voice will prompt you on where to put the pads to analyze the rhythm of the heart, and if a shock is advised, it’ll tell you how to deliver the shock.

“If you can shock their heart right away, get it to restart, they have the best outcomes overall. And even if a shock is not recommended, it will walk you through the steps of CPR until help arrives.”