By Brad Lendon, CNN
Updated 11:21 PM EST, Wed January 8, 2020
Ad Feedback
Video Ad Feedback
Tensions with Iran
what would a us iran war look like foreman pkg ebof vpx orig_00000000.jpg
Now playing
02:06
This is what a US-Iran war could look like
TOPSHOT - Iranians tear up a US flag during a demonstration in Tehran on January 3, 2020 following the killing of Iranian Revolutionary Guards Major General Qasem Soleimani in a US strike on his convoy at Baghdad international airport. - Iran warned of "severe revenge" and said arch-enemy the United States bore responsiblity for the consequences after killing one of its top commanders, Qasem Soleimani, in a strike outside Baghdad airport. (Photo by ATTA KENARE / AFP) (Photo by ATTA KENARE/AFP via Getty Images)
Atta Kenare/AFP/Getty IMages
Now playing
03:39
How the US and Iran became enemies
Now playing
03:50
Tapper presses defense secretary on Iran intelligence
Alireza Azami
Now playing
02:16
Video shows protests in Tehran as Trump tweets support
Anonymous Photos of crash site of Ukrainian plane - Laleh Park, Shahed Shahr, Iran
Anonymous
Now playing
02:59
Iran admits to shooting down Ukrainian passenger plane
The White House released this photo of President Trump, Vice President Mike Pence and other officials in the Situation Room of the White House, on a further meeting about the Islamic Republic of Iran missile attacks on U.S. military facilities in Iraq.
White House Photo
Now playing
03:18
How the US response to Iran's attack unfolded behind the scenes
CNN
Now playing
03:30
Avlon looks back at 100 years of US-Iran tensions
CNN
Now playing
02:38
Here's how Iran's missiles could affect American targets
U.S. President Donald Trump speaks from the White House on January 08, 2020 in Washington, DC. During his remarks, Trump addressed the Iranian missile attacks that took place last night in Iraq.
Win McNamee/Getty Images
Now playing
10:21
Hear President Trump's full remarks on Iran
base damage
planet labs inc.
Now playing
01:51
Images appear to show damage to base housing US troops
trump iran diplomacy ath sanger vpx _00000520.jpg
CNN
Now playing
01:37
Analyst on Trump's speech: There was a little for everyone
missiles
fars news
Now playing
00:53
Video appears to show missiles hit air base housing US troops
(FILES) In this picture taken on September 14, 2013, the commander of the Iranian Revolutionary Guard's Quds Force, Gen. Qassem Soleimani, is seen as people pay their condolences following the death of his mother in Tehran. For a man widely reported to be playing a key role in helping Iraq's routed military recover lost ground, Qassem Soleimani, 57, the commander of Iran's feared Quds Force, remains invisible. AFP PHOTO/ISNA/MEHDI GHASEMI (Photo by MEHDI GHASEMI / ISNA / AFP) (Photo by MEHDI GHASEMI/ISNA/AFP via Getty Images)
MeGetty Imageshdi Ghasemi/ISNA/AFP/Getty Images
Now playing
01:31
How Soleimani used asymmetric warfare against Iran's enemies
Shutterstock
Now playing
01:31
Iran FM: We do not seek escalation of war
Now playing
00:10
This is what a US-Iran war could look like
CNN
Now playing
02:14
Iran could use this drone for attacks
CNN  —

With almost 3 million personnel, 4,800 defense sites on seven continents and an annual budget of more than $700 billion, the US military is considered the world’s premier fighting force.

Here’s a look at some of its most important weaponry.

A US official said Tuesday that six of the massive, eight-engine bombers would be sent to the air base at Diego Garcia in the Indian Ocean.

There are around 75 B-52s in the US Air Force’s active and reserve fleets. They can carry a mixed load of 35 tons of ordnance that includes bombs, mines and missiles.

Once released from the bomber, the cruise missiles use internal guidance and their own turbofan engines to fly to and strike independent targets with warheads weighing up to 3,000 pounds (1,360 kilograms).

The B52 bomber first came into service in 1952 and has been upgraded over the years to carry air-launched cruise missiles.
Master Sgt. Kevin Gruenwald/USAF

The bat-winged heavy bombers can carry both conventional and nuclear weapons. The US Air Force’s fleet of 20 operate from Whiteman Air Force Base in Missouri, but they can stage out of bases like those on Diego Garcia, or the Pacific island of Guam. 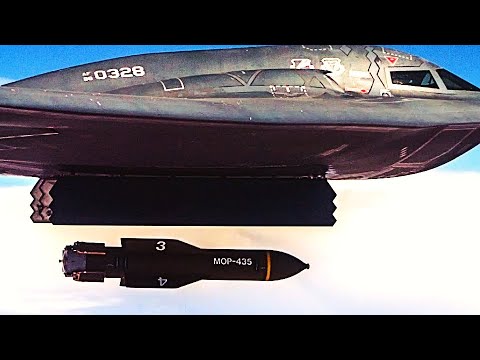 In a conventional conflict, the four-engine B-2 can carry two GBU-57 Massive Ordnance Penetrators, the biggest non-nuclear bombs in the US arsenal.

These 30,000-pound, 30-foot-long (13,607-kilogram, 9-meter-long) bombs are designed to strike deep into the ground to take out missile and command complexes that are out of reach of other non-nuclear weapons.

The B-2 can also carry a range of other weaponry and has been battle tested in conflicts in Syria, Iraq and Afghanistan.

B-2 stealth bombers have been battle-tested in Syria, Iraq and Afghanistan.
FILE/U.S. Air Force/Getty Images

The four-engine bombers, of which the US has more than 60 in its fleet, can carry the largest payload of any aircraft in the US Air Force – more than 75,000 pounds (34,019 kilograms) worth, including cruise missiles, gravity bombs and naval mines.

In the past, B-1s have been used extensively to drop Joint Direct Attack Munitions, essentially free-fall bombs with guidance systems attached to their tails, which can get them within 15 feet (5 meters) of their target.

B-1 bombers can carry the largest payload of any aircraft in the US Air Force fleet.
USAF/Senior Airman James Richardson

The US Air Force has about 180 F-22s, which are considered the force’s most capable fighter aircraft.

Besides its ability to take on the best of any fighter aircraft foes have to offer, the stealthy F-22 can carry two Joint Direct Attack munitions and radar-guided air-to-ground missiles.

In the early days of any conflict involving US forces, F-22s – with their ability to stay undetected by enemy radar – could be expected to target air defense sites, opening up the airspace for follow-on attacks by less stealthy planes and cruise missiles.

The US Navy has dozens of submarines that can stay submerged and potentially launch hundreds of Tomahawk cruise missiles at land and sea targets.

The most capable of these subs, four Ohio-class guided-missile submarines, carry up to 154 Tomahawks.

Additionally, each missile can carry info on 15 targets in its guidance system, giving it the ability to switch destinations mid-flight.

Besides the Ohio-class subs, the US Navy’s Virginia-class and Los Angeles-class boats – more than four dozen of them – can carry the Tomahawks, albeit in fewer numbers.

Ohio-class submarines like the USS Michigan can carry up to 154 Tomahawk missiles.
Raymond Solis/U.S. Navy

There are 11 active aircraft carriers in the US Navy fleet, 10 Nimitz-class and one Ford-class.

While those numbers seem extensive, only three to four are likely to be battle ready at any one moment.

As of Monday, the US Naval Institute showed one carrier, the USS Harry Truman, in the Middle East.

An F/A-18 fighter jet aboard a US aircraft carrier.
Lindsay A. Preston/U.S. Navy/File

The carriers can hold more than 60 aircraft each, including F/A-18 fighter jets, with a combat range of more than 1,200 miles (2,300 kilometers), carrying two air-to-ground missiles each.

In addition to the carriers, the Navy operates nine amphibious assault ships, which are essentially small aircraft carriers.

These ships carry the US military’s newest fighter jet, the Marine Corps’ F-35B stealth fighter. F-35Bs can carry two guided bombs with a combat radius of about 500 miles (805 kilometers).

Like the carriers, fewer than half of these ships are likely to be combat ready at any one time. One, the USS Bataan, is near the Middle East, the USNI fleet tracker shows.

The US Navy’s fleet of guided-missile cruisers and destroyers can operate in conjunction with the aircraft carriers in carrier-strike groups, or independently.

The Arleigh Burke-class destroyers number more than 70 in active service, and form the backbone of the Navy’s fleet. Each can carry up to 56 Tomahawk cruise missiles to attack land and sea targets.

The Ticonderoga-class cruisers also carry cruise missiles, though in smaller numbers than the destroyers.

Both ships provide the Navy with its most advanced missile defense system, AEGIS. The system, which communicates targeting info among various platforms, can target low-level and ballistic missiles threatening ships, or even targets on land.