He’s not welcome in the country. He can’t even phone his mother. She said it was better if he didn’t, because every time he did, police would show up at her door.

So, when Elkun’s father died in 2017, there was no way he could go back to China for the burial. To be closer to his family, he would view his father’s grave on Google Earth.

“I know exactly where his tomb is,” Elkun told CNN in his north London home. “When I was a kid we would go there, pray at the mosque, visit our relatives. The entire community was connected to that graveyard.”

He “visited” his father like this for nearly two years. But in June, something changed. The satellite photo on Google had been updated and the graveyard that used to be there was now nothing more than a flattened, empty field.

“I had no idea what happened,” said Elkun. “I was completely in shock.” 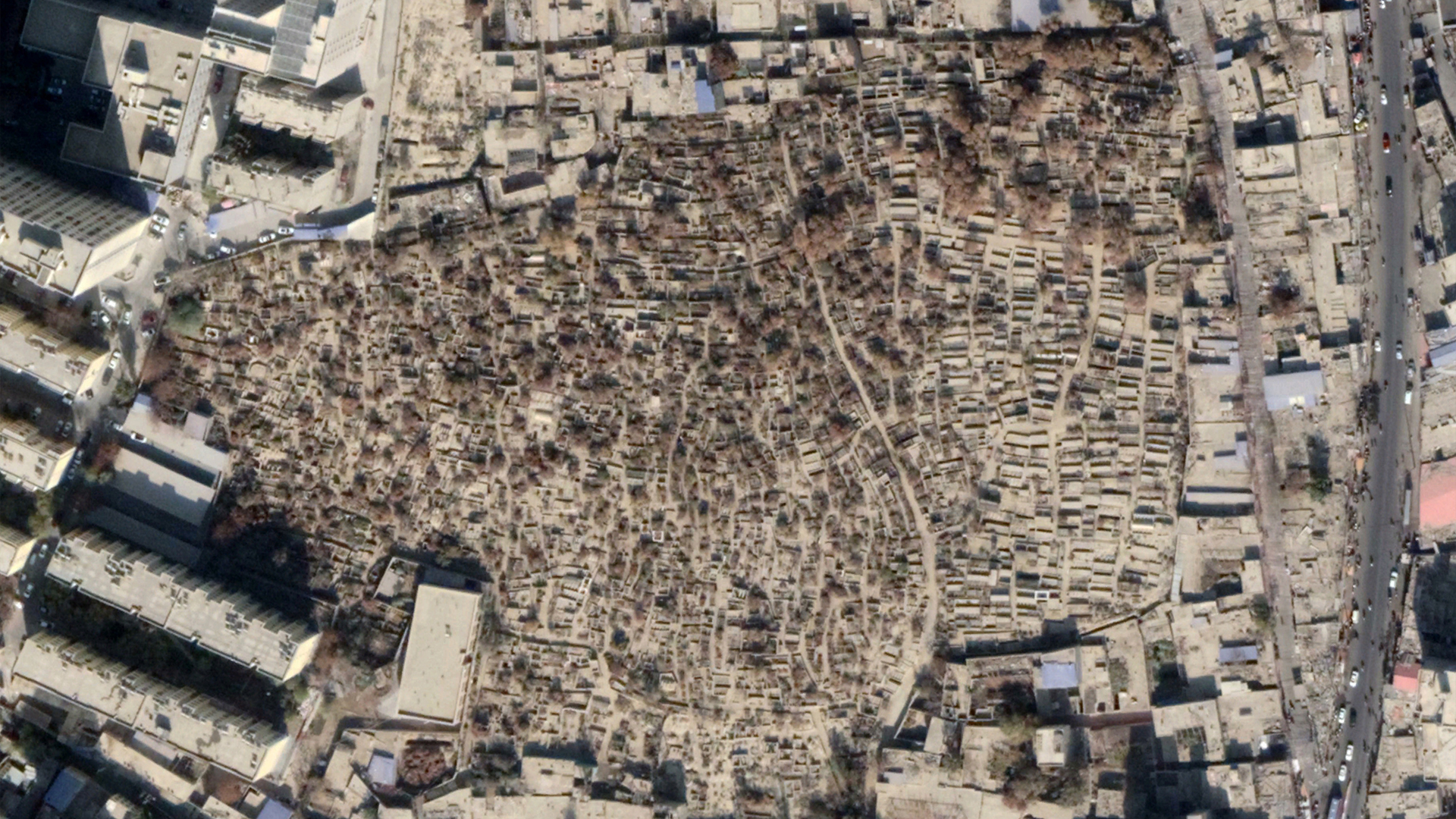 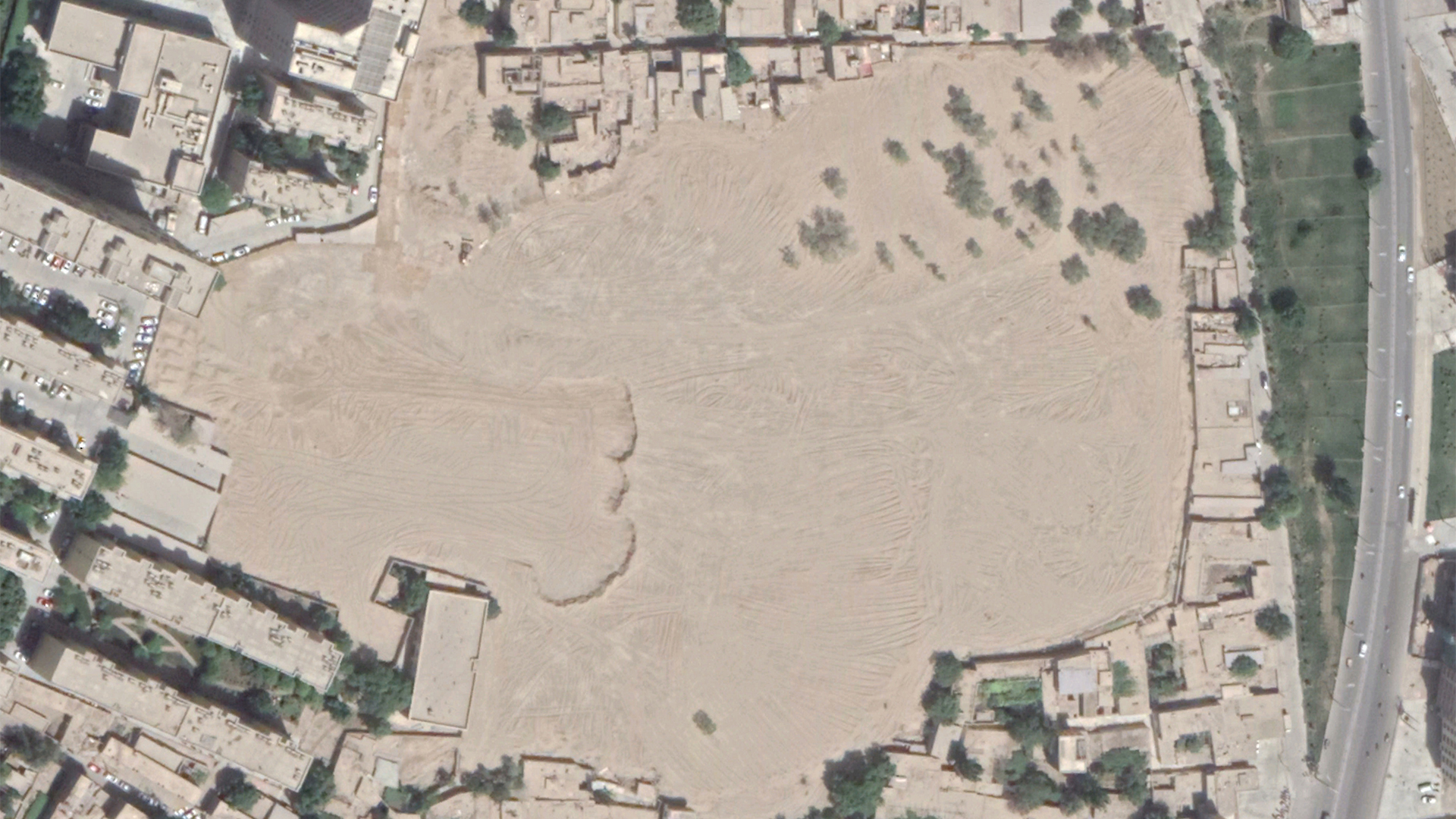 The Sultanim Cemetery in the center of Hotan City is one of the most famous ancient cemeteries in Xinjiang. It was destroyed between January to March 2019.

Elkun’s story is not unique.

China appears to have been destroying traditional Uyghur cemeteries for several years as part of what critics describe as a broader, coordinated campaign to control Islamic beliefs and Muslim minority groups within its borders.

In a months’ long investigation, working with sources in the Uyghur community and analyzing hundreds of satellite images, CNN has found more than 100 cemeteries that have been destroyed, most in just the last two years. This reporting was backed up by dozens of official Chinese government notices announcing the “relocation” of cemeteries.

The destruction of Uyghur cemeteries was first reported in October by French news agency AFP and satellite imagery analysts Earthrise Alliance. They found at least 45 cemeteries had been destroyed since 2014.

AFP reporters visited several sites of destroyed cemeteries. In some, they found several bones that scientists later confirmed from photos were human remains 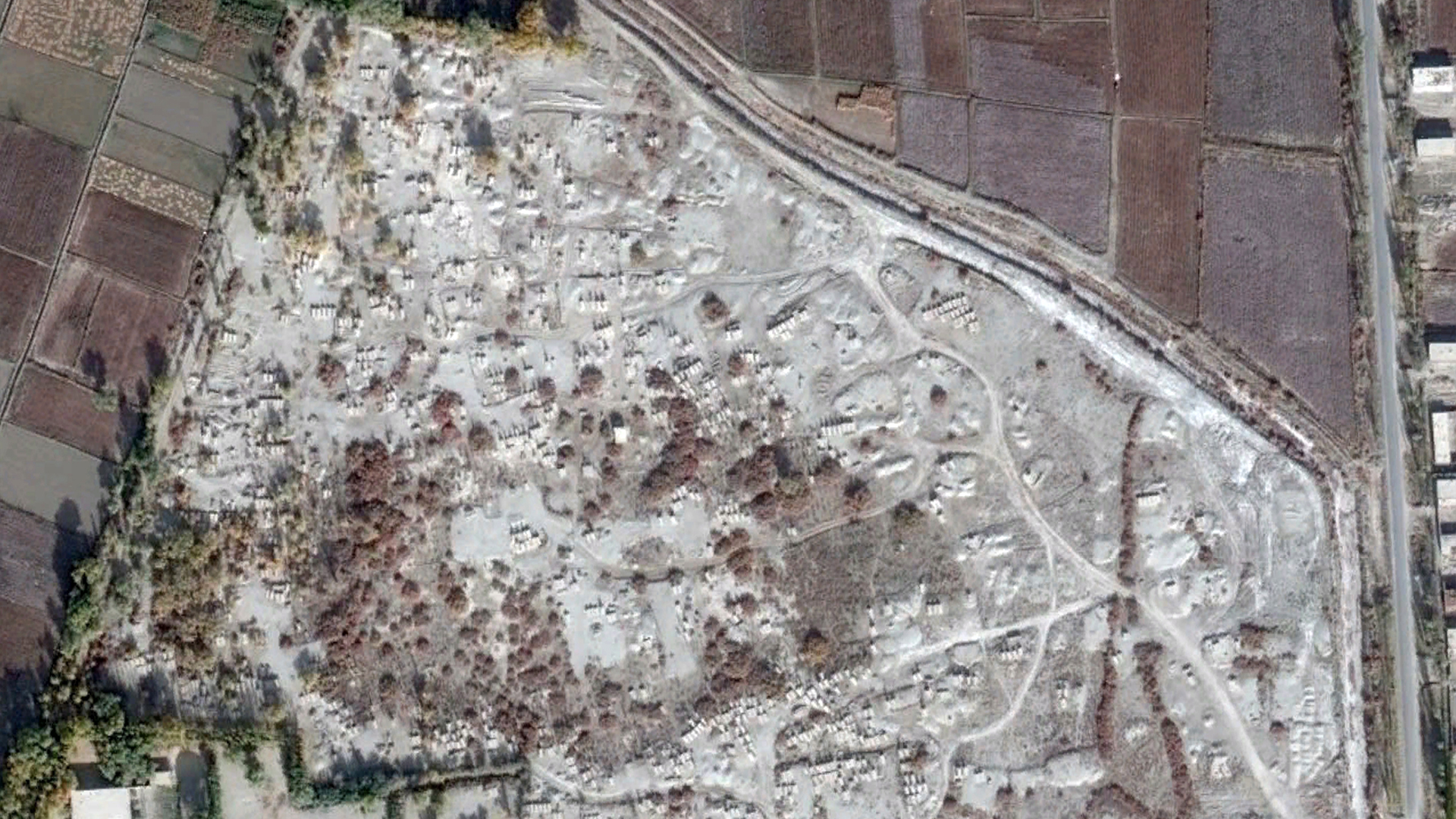 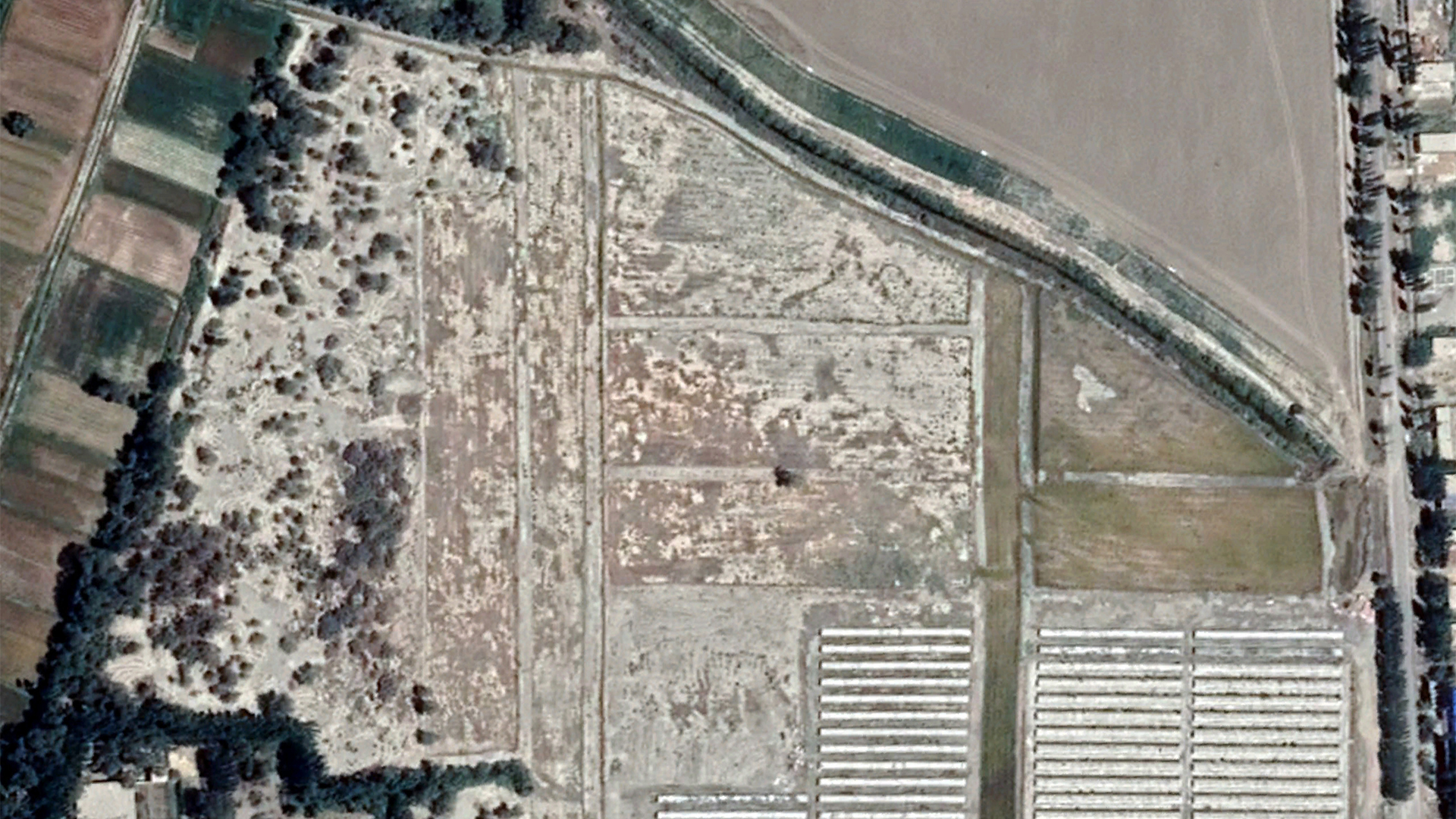 The graveyard in Xayar County, central Xinjiang, where Aziz Isa Elkun father's Isa Abdulla was buried after he died on in November 3rd, 2017.

CNN has identified more than 60 other gravesites that are no longer there, by cross-checking sites known to the Uyghur community abroad with satellite images taken over a number of years.

In response to CNN’s request for comment, the Chinese government didn’t deny the cemetery destruction.

A spokesperson with the Ministry of Foreign Affairs said in a statement in part, “Governments…in Xinjiang fully respect and guarantee the freedom of all ethnic groups… to choose cemeteries, and funeral and burial methods.”

One official notice announcing the “relocation” of a cemetery in western Aksu City said it needed to be moved “to meet the demand of city planning and promote construction.”

CNN shared before and after images with five experts from Canada, the United States and Australia with experience in Uyghur culture or satellite imagery. They included Rian Thum, a respected historian who uses satellite imagery as part of his research into Islam in China. 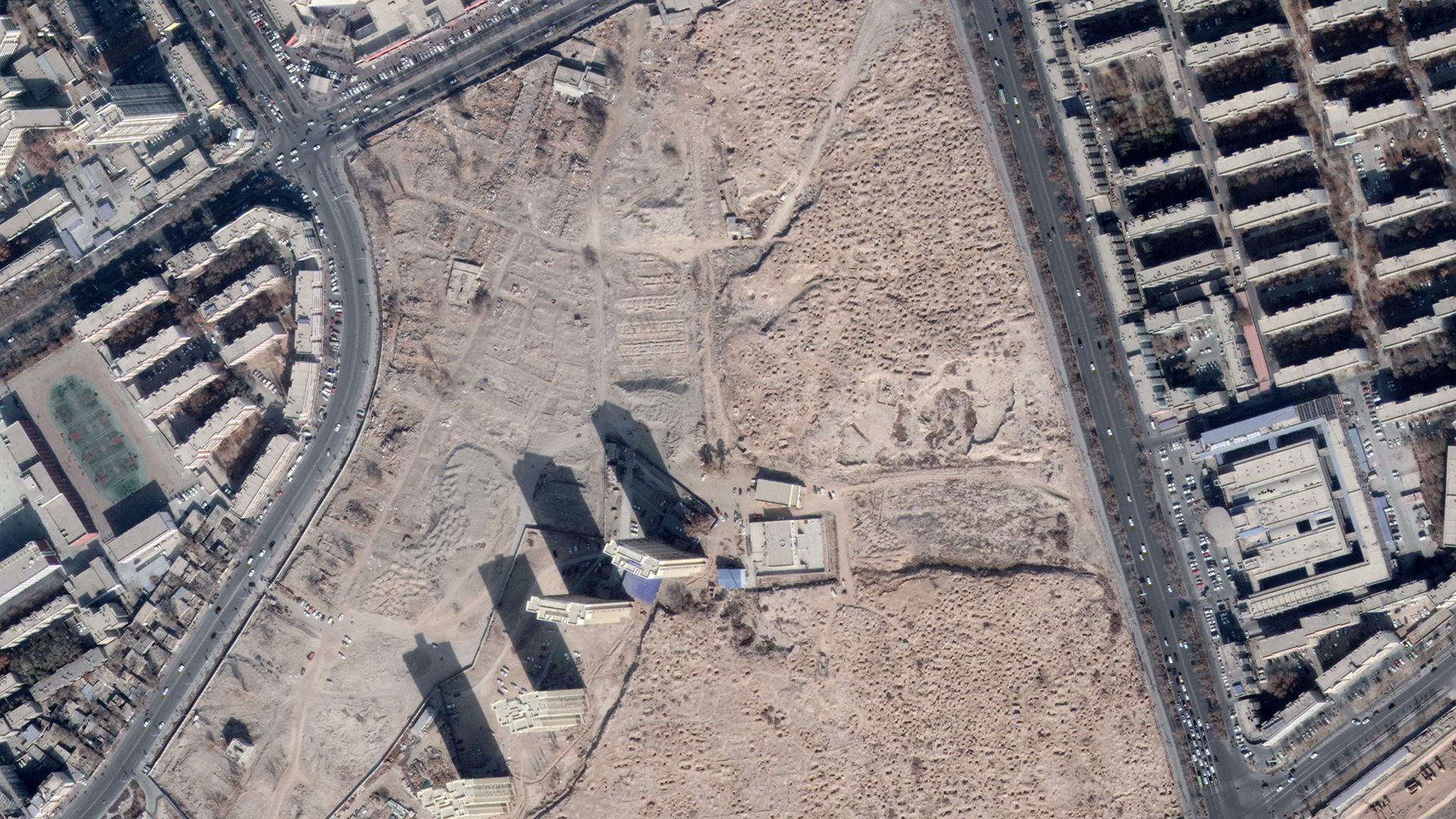 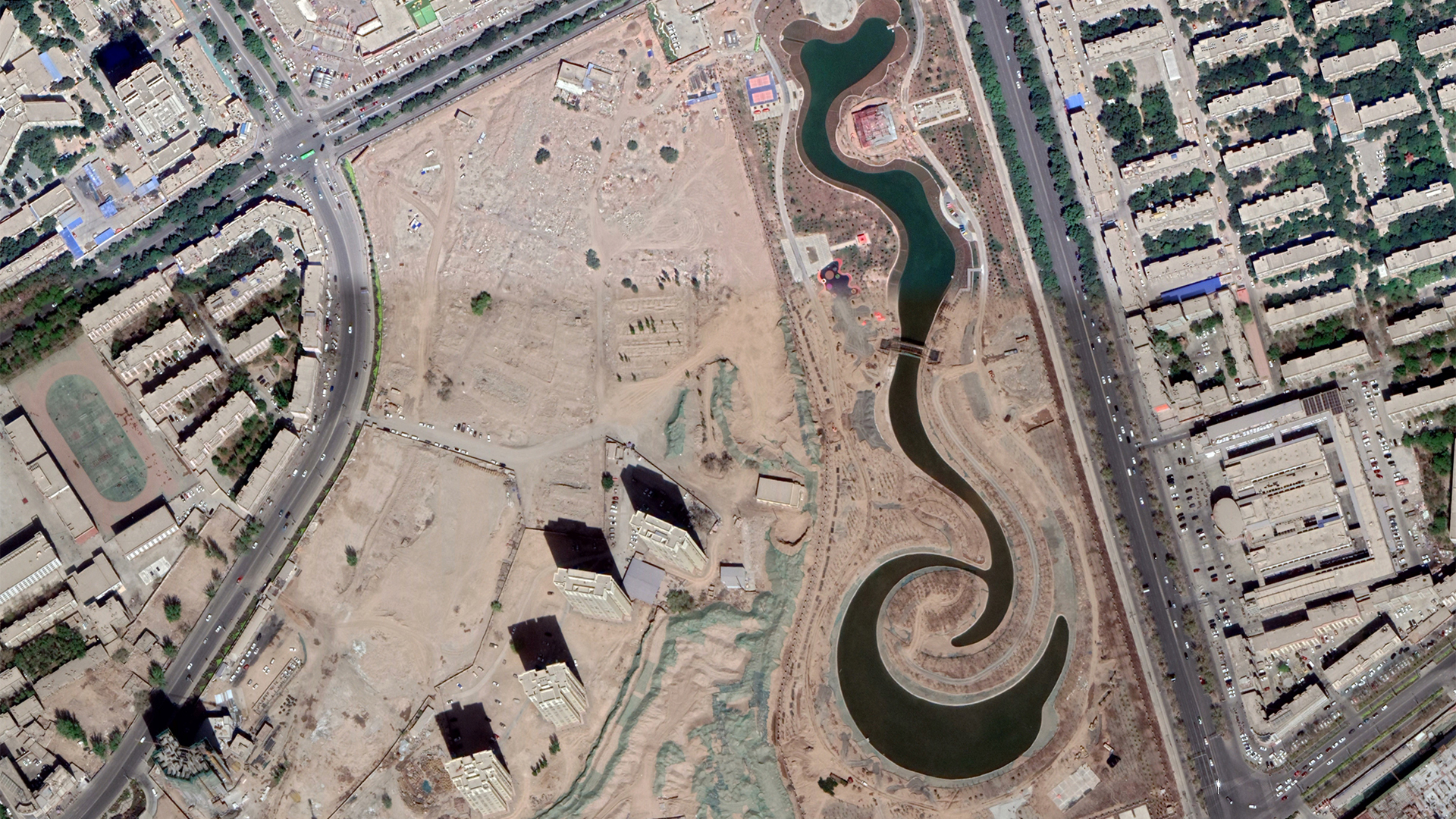 This cemetery was located in downtown Aksu City, Xinjiang. It was destroyed sometime between March and April, 2018.

Thum confirmed the majority of the satellite images shared with him were undoubtedly destroyed cemeteries. The other four experts verified the rest of the sites.

“It is a phenomenon that stretches right across the region of Xinjiang,” said Thum.

At a press conference on December 16, Chinese Foreign Ministry spokesman Geng Shuang said that citizens’ freedom of religious belief is strongly protected in Xinjiang and that local people endorsed the Chinese government’s measures to “fight terrorism and maintain stability.” 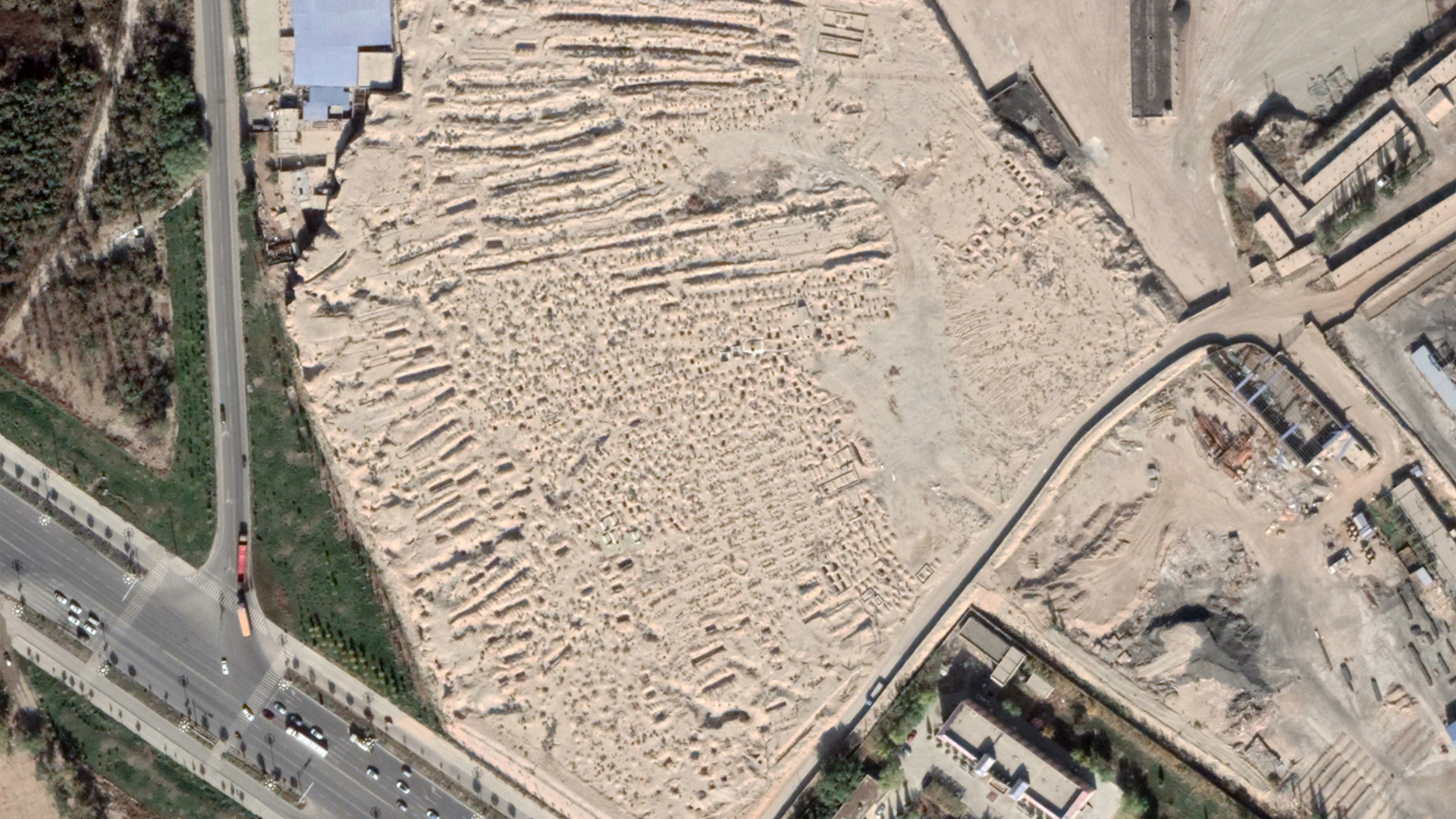 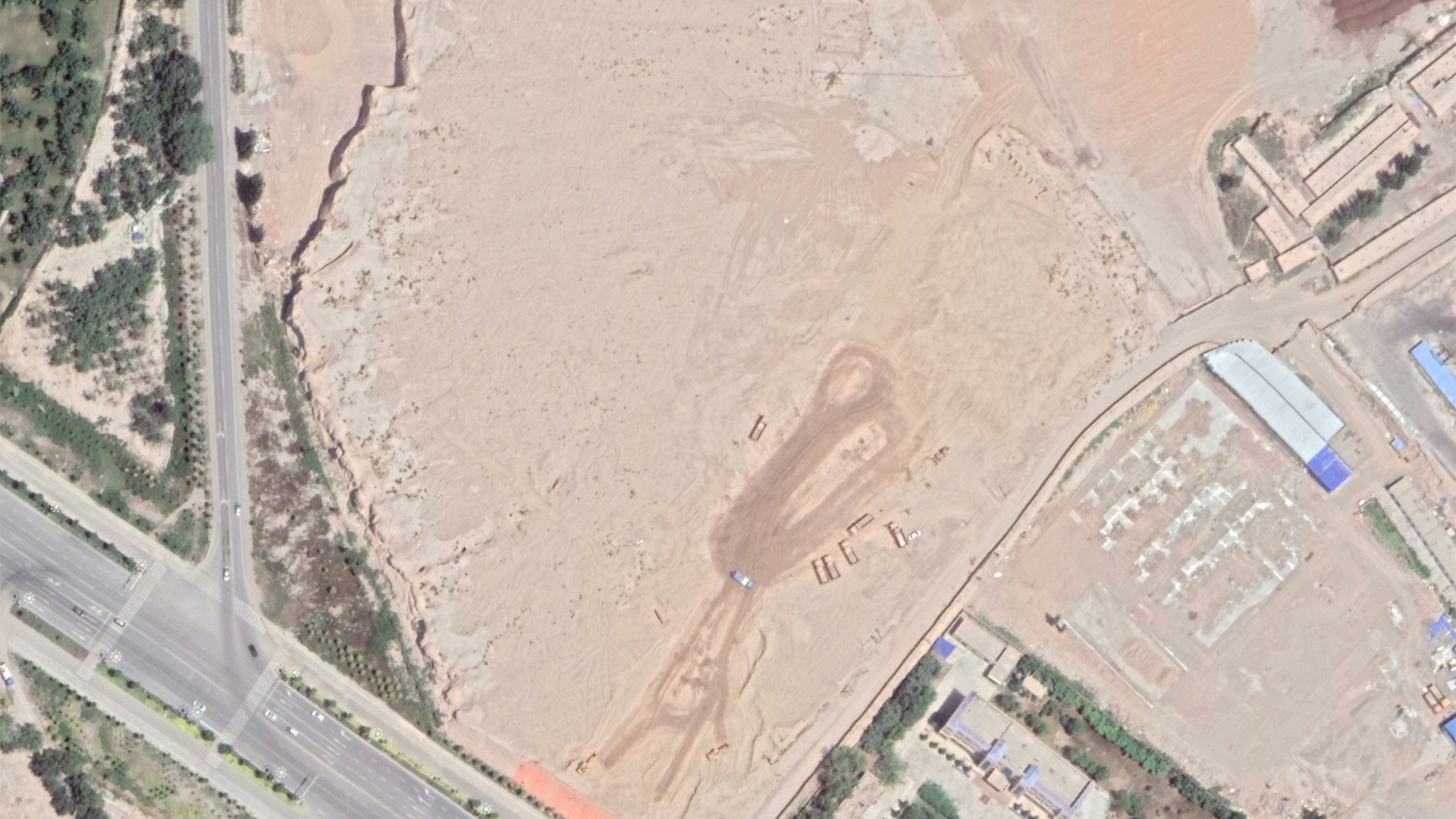 This cemetery was located northwest of the city of Aksu, Xinjiang. It was destroyed and relocated between February and March 2019.

China is under intense and unwelcome international scrutiny after the release of documents that appear to confirm that it is deliberately trying to alter the Uyghur people to be more like the wider mandarin-speaking Han Chinese population.

The US State Department has said up to two million people from Muslim ethnic minorities, including Uyghurs, have been held in a massive network of detention camps since 2017.

China’s government has consistently denied it is committing human rights abuses. It says the camps are voluntary vocational training centers, designed to stamp out religious extremism that has led to terrorist attacks.

“They are not concentration camps as called by some people,” he said. “People arrive and leave constantly … Most have already gone back to society.”

It isn’t the first evidence of a coordinated campaign against Uyghur citizens. Multiple former detainees have told CNN they were tortured inside the camps and forced to pledge loyalty to China’s Communist Party.

Leaked video earlier this year showed prisoners being led from a train, while under heavy guard, blindfolded and shackled.

Outside the camps, it appears the government is trying to erase key elements of Uyghur culture.

More than a million Chinese public servants have been sent to stay with Uyghur families to ensure that they acted sufficiently patriotically. Satellite imagery and media reports suggest mosques have been destroyed across the region.

“This is absolutely a massive effort to eradicate Uyghur culture as we know it and replace it with a Chinese communist party approved culture,” said Thum.

At a press conference on December 16, Chinese Foreign Ministry spokesman Geng Shuang said that citizens’ freedom of religious belief is strongly protected in Xinjiang and that local people endorsed the Chinese government’s measures to “fight terrorism and maintain stability.”

Cemeteries are important in every culture, but perhaps more so in Uyghur culture. Cemeteries are central to village life, a place to meet and connect one generation to the last.

“It’s akin for an American to see Arlington cemetery razed and the tomb of the unknown soldier dug up and paved over,” said Thum.

“People would come to a shrine or cemetery from all over the Uyghur region for the annual pilgrimage festival… People pray for health and blessings, meet neighbors, share communal feasts and shop at carnival-like markets.”

Experts and activists said cemeteries that had existed for hundreds of years were wiped out in a matter of months.

According to Uyghur activists and documents, the Sultanim Cemetery in the center of southwestern Hotan had existed in one form or another for more than 1,000 years, and was one of the most spiritually significant resting places in the city.

According to satellite images, it was completely flattened by April 2019.

Some cemeteries were redeveloped quickly with seeming disregard for the spiritual places they once were, the investigation by AFP showed, paved over and seeded with modern buildings.

Part of the Sultanim Cemetery appears to now be a parking lot.

The May 2017 notice gave relatives just over two weeks to come and register their loved ones’ graves before the removal and relocation work started. “Those graves that have not been registered within the date will be seen as unclaimed graves,” the notice said.

What happened to the unclaimed graves was not mentioned.

Other official reasons for the destruction include wanting to build “civilized” cemeteries to “promote cultural and ideological progress.”

Contacting his remaining family in Xinjiang, he believes, is too dangerous. For those living in the region, contact with the outside world often brings increased police scrutiny.

Amnesty International has reported that those who take calls from abroad are sometimes detained by authorities. Elkun himself is terrified that his 78-year-old mother, who he believes is not in great health, could be swept up in the dragnet by his actions.

He even fears that speaking to the international media could have negative effects for his family inside the country. But Elkun said he believes has no choice but to speak out, calling what is going on in Xinjiang a “cultural genocide.”

“We cannot live with (the government) together anymore, they’ve crossed too many red lines,” he said.

Correction: This story has been updated to correct the timeframe of when Elkun fled the Xinjiang region.