For one Milwaukee family, this year’s Christmas miracle didn’t arrive by reindeer-led sleigh. It came via a county transit system bus.

After finishing her bus route around midnight on a frigid December 18, Milwaukee County Transit System bus driver Jamie Grabowski was heading back to the garage when she spotted two dogs darting in and out of the street. So, she pulled over.

“Hey, you two! You need to go home right now,” Grabowski can be heard saying on the bus’ surveillance video as she rolls down her window. “C’mon, c’mon, inside!” 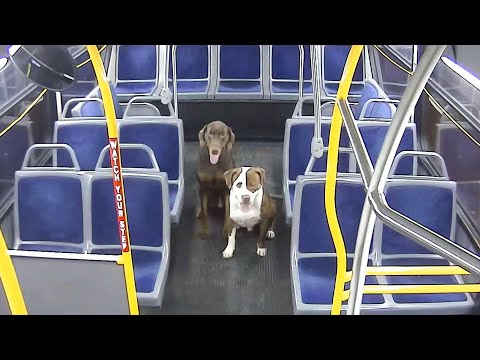 Grabowski stopped the bus, opened the front door, got out and guided the pit bull and Doberman pinscher onboard, where they explored while she contacted transit dispatch.

“I got them on the bus because I thought they were going to get hit,” she told the dispatcher before turning to her furry passengers. “Come here, babies! I know. Come here. I’m going to get you home.”

Grabowski, a self-proclaimed “dog whisperer,” worried the dogs would freeze in the 20-degree Fahrenheit weather, she said. She played with them while she waited for a police officer to pick them up, the video shows.

“It was meant to be for me to find these dogs,” she told CNN affiliate WITI.

The police officer carried the dogs to his squad car and took them to the Milwaukee Area Domestic Animal Control Commission, which contacted the duo’s family.

MCTS Bus Driver Jamie Grabowski got to reunite today with the two pups she found. She also met the dogs' grateful family for the first time! #MCTSExcellence https://t.co/MYavaVvziv pic.twitter.com/XH3G21cxN7

The dogs’ owner, Stephanie Gomez, told WITI that the dogs got loose when her mom let them outside to use the bathroom.

“She turned around for a good five seconds, turned back around, and they were gone,” Gomez said.

Grabowski found the pair about 2 1/2 miles from their home, according to Milwaukee County Transit System.

Learning Grabowski had cared for their dogs even though she’d never met them made Gomez’s family happy, the owner told WITI.

“I thought we weren’t going to see them again,” she said. “We were all panicking at the moment because basically these are our kids.”