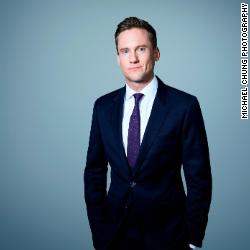 By Will Ripley and Joshua Berlinger, CNN
Updated 7:32 PM EST, Mon December 23, 2019
PHOTO: KCNA/KNS/AFP/Getty Image
This undated and undisclosed picture released from North Korea's official Korean Central News Agency (KCNA) on November 29, 2019 shows North Korean leader Kim Jong Un (C) inspecting the test-fire of the super-large multiple launch rocket system. (Photo by KCNA / KCNA VIA KNS / AFP) / - South Korea OUT / ---EDITORS NOTE--- RESTRICTED TO EDITORIAL USE - MANDATORY CREDIT "AFP PHOTO/KCNA VIA KNS" - NO MARKETING NO ADVERTISING CAMPAIGNS - DISTRIBUTED AS A SERVICE TO CLIENTS / THIS PICTURE WAS MADE AVAILABLE BY A THIRD PARTY. AFP CAN NOT INDEPENDENTLY VERIFY THE AUTHENTICITY, LOCATION, DATE AND CONTENT OF THIS IMAGE --- / (Photo by KCNA/KCNA VIA KNS/AFP via Getty Images)
Now playing
02:13
Source close to North Korea predicts what the Christmas gift is
PHOTO: Metropolitan Police
UK police appealed for help Friday, Feb. 20, 2015, to find three teenage girls who are missing from their homes in London and are believed to be making their way to Syria. The girls, two of them 15 and one 16, have not been seen since Tuesday, Feb. 17, 2015, when, police say, they took a flight to Istanbul. One has been named as Shamima Begum, 15, who may be traveling under the name of 17-year-old Aklima Begum, and a second as Kadiza Sultana, 16. The third girl is identified as Amira Abase, 15.
Now playing
00:39
Shamima Begum loses legal bid to return home to appeal citizenship revocation
PHOTO: FAYEZ NURELDINE/AFP/Getty Images
Saudi Crown Prince Mohammed bin Salman attends a conference in the Saudi capital Riyadh on October 2018.
Now playing
02:10
US intel report: Saudi Crown Prince responsible for approving Khashoggi operation
PHOTO: Costa Argyrous
A Fijian rugby team serenaded workers in the Sydney hotel where they are quarantining.
Now playing
00:45
See Fijian rugby team serenade quarantine staff in Australia
PHOTO: Russia MOFA
Russian diplomats working in the Pyongyang embassy had to use a handcar as they returned home from North Korea with their family members. In a video released by the Russian Foreign Ministry on Thursday (February 25) diplomats and their family members are seen pushing a handcar and cheering as they cross the bridge which serves as a demarcation line between the two countries.
Now playing
02:38
Video shows Russian diplomats leaving North Korea on handcar
PHOTO: Daniel Slim/Getty Images
The Pentagon, the headquarters of the US Department of Defense, located in Arlington County, across the Potomac River from Washington, DC is seen from the air January 24, 2017. / AFP PHOTO / Daniel SLIM (Photo credit should read DANIEL SLIM/AFP via Getty Images)
Now playing
05:24
US carries out airstrikes on Iran-backed militia groups
PHOTO: Barcroft Media/Barcroft Media/Barcroft Media via Getty Images
CATANIA, ITALY - FEBRUARY 18, 2021 - Mount Etna erupts in Sicily sending plumes of ash and spewing lava into air - PHOTOGRAPH BY Marco Restivo / Barcroft Studios / Future Publishing (Photo credit should read Marco Restivo/Barcroft Media via Getty Images)
Now playing
01:04
See mesmerizing footage of Mount Etna spewing lava
PHOTO: CNN
Vials of vaccine are packed at the Generium Pharmaceutical plant, which is gearing up production of Sputnik V.
Now playing
03:21
Exclusive: Inside Russia's new Covid-19 vaccine factory
el chapo who is rs orig_00000406.jpg
Now playing
00:57
Who is 'El Chapo'?
PHOTO: CNN
screengrab codogno lockdown one year on
Now playing
02:20
Residents in Italian town reflect on life one year under pandemic
PHOTO: Ariel Schalit/AP
People clean tar from an oil spill in the Mediterranean sea in Gador nature reserve near Hadera, Israel, Saturday, Feb. 20, 2021. Hundreds of volunteers are taking part in a cleanup operation of Israeli shoreline as investigations are underway to determine the cause of an oil spill that threatens the beach and wildlife, at Gador Nature Reserve near the northern city of Hadera, the tar smeared fish, turtles, and other sea creatures.
Now playing
01:10
Oil spill leads Israel to close beaches
Now playing
03:26
CNN speaks with sister of slain Myanmar protest victim
PHOTO: House of Commons/PA Images via Getty Images
Prime Minister Boris Johnson giving his speech to Parliament, in in the House of Commons, London, about setting out the road map for easing coronavirus restrictions across England. Picture date: Monday February 22, 2021. (Photo by House of Commons/PA Images via Getty Images)
Now playing
02:09
Here's what we know about England's reopening plans
PHOTO: Italian Embassy Kinshasa
Luca Attanasio - The ambassador killed in DR Congo. He and the military were traveling aboard a car in a MONUSCO convoy, the United Nations stabilization mission in the Democratic Republic of Congo.
Now playing
01:43
What we know about the killing of Italy's ambassador to the DRC
Iraq Baghdad coronavirus Covid-19 ICU Damon pkg intl hnk vpx_00002701.png
Now playing
03:27
Rare access inside a hospital shows how Iraq is handling Covid-19
PHOTO: Track 88
Now playing
02:00
Footage shows debris from plane in Dutch town
(CNN) —

North Korea is planning to adopt a hard-line policy toward the United States that involves taking denuclearization off the table amid perceptions that President Donald Trump is vulnerable politically, a source familiar with the North Korean leadership’s current mindset told CNN.

The source said this new policy is likely the so-called “Christmas gift” floated by a top North Korean official earlier this month. It is expected to include abandoning negotiations with Washington and consolidating Pyongyang’s status as a nuclear weapons state.

Pyongyang will also no longer pursue sanctions relief as a means of achieving economic development either in the short-term or long-term, but will instead increase its commitment to the state’s ideology of self-reliance, known as Juche.

North Korean leader Kim Jong Un announced in 2018 that North Korea had “completed” its quest to develop nuclear weapons and vowed to fully focus the country’s efforts on economic development and improving the livelihood of his people.

It’s unclear how Trump and his administration would respond to such a decision. After Trump took office in 2017, he and Kim sparred verbally as North Korea test-fired a bevy of increasingly advanced ballistic missiles, the type designed to deliver nuclear warheads.

A flurry of diplomacy that included three in-person meetings between Trump and Kim followed, but working-level negotiations have not made much progress. As the clock has ticked closer to an end-of-year deadline for talks imposed by the North Koreans, the rhetoric on each side has taken on some of the vitriol of 2017.

The source said that Kim is expected to take a “wait and see” approach. This is based on the perception that Trump is politically vulnerable due to his impeachment and the looming 2020 presidential election.

Analysts believe Pyongyang is worried that if it does cut a deal with Trump and he loses in November, his successor may not uphold the accord. North Korea and the United States have reached previous agreements that did not survive successive administrations, and more recently Kim’s diplomats have been quick to cite the Trump administration’s decision to abandon a nuclear deal with Iran as a reason it can’t trust the United States to commit to a long-term accord.

If Trump does win a second term, the North Koreans may be more willing to reengage, the source said. But the bar has definitely been raised for returning to talks with Washington.

Denuclearization, the source said, appears to be off the table for now.

Experts and analysts have speculated that the “Christmas gift” warning could portend some sort of advanced missile launch or satellite test, actions that would likely necessitate a response from the US and other global powers.

However, the chances are “very low” that North Korea will actually conduct a provocative test like a satellite launch, firing an ICBM, or detonating a nuclear weapon, because those acts would be considered too provocative for the likes of China and Russia, Pyongyang’s two most important international trading partners, the source said.

Both nations have historical ties to North Korea. China, in particular, is believed to account for almost 90% of North Korea’s imports – a vital lifeline for Pyongyang.

Backdoor supply lines from China and Russia are beginning to reopen, the source said, and the North Koreans are aware that something its most important economic partners view as too extreme could alienate them.

Analysts say while China and Russia want North Korea to give up its nuclear weapons and ballistic missiles, their number one priority is stability on the Korean Peninsula.

Moscow and Beijing have in the past been willing to punish North Korea for its nuclear weapons program development. Both countries approved the punishing international sanctions levied on Pyongyang in 2017 in response to its various missile and nuclear tests.

The source said recent engine tests at the Sohae site helped North Korean scientists “gain valuable knowledge,” but did not cross a red line that would damage relations with China and Russia.

North Korea has conducted a number of shorter-range missile and rocket tests in recent months, a violation of UN Security Council resolutions, but not the agreement reached by Trump and Kim. The North Korean leader only pledged to stop testing long-range missiles and nuclear weapons.

If Kim were to violate his pledge to Trump, that would likely necessitate a response by the US.

“My relationship with Kim Jong Un is really good, but that doesn’t mean he won’t abide by the agreement we signed,” Trump said at the sidelines of a NATO meeting earlier this month.

“I hope he lives up to the agreement, but we’re going to find out,” added Trump.