Phone home! E.T. reunites with Elliott and viewers in a Thanksgiving TV ad

If you suddenly burst into tears during a Macy’s Thanksgiving Day Parade commercial break, your younger family members might’ve been startled. But they probably never dreamed of taking flight on a bike with an alien in the basket.

E.T. – yes, THAT E.T.! – made a surprise appearance in commercial for telecommunications company Xfinity. Only this time, he landed on Earth on purpose, and he’s learning about tablets and playing in the snow.

In the four-minute ad, E.T. conveniently parks his spaceship in the backyard of a grown-up Elliott (played by Henry Thomas, reprising the role that taught kids how to expertly fake a fever).

Elliott’s children and wife are shocked to see this small raisin-like creature, but Elliott excitedly hugs his old friend from 1982. 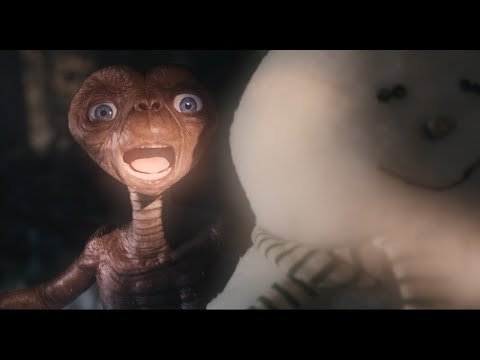 In a montage of his winter stay on Earth, everyone’s favorite portly alien revives dead flowers, tries out VR goggles and sleds through the snow with Elliott’s two children.

It is also implied that E.T. has a family of his own, as he looks longingly into a tiny orb that glows with the holograms of a tinier ET.

The most infamous balloon accidents from the Macy's Thanksgiving Day Parade

At one point, Elliott’s unnamed children and E.T. fly past a full moon on bicycles, but this time it’s for fun and not to escape bad guys.

When it comes time for E.T. to phone home, Elliott sees him off with tears in his eyes. Millions of Americans weep with him.

“I’ll be right here,” E.T. tells Elliott’s son, pointing to his heart, before taking back off on his spaceship.

But then the son’s shirt starts to glow, and he finds the same orb E.T. used to see his family – and this time, Elliott and his kids can see E.T.! Interstellar communication is so much easier now than in the 1980s.

If you didn’t catch the Xfinity ad live, a truncated version will air during the Thanksgiving Day NFL games on CBS at 4:30 p.m. eastern and on NBC at 8:20 p.m.

Syfy will also run the ad in full in between airings of “E.T.” on Thanksgiving Day, Variety reported.

Maybe the tears will stop after the third, fourth or hundredth viewing. If not, remember your old pal E.T. is always with you – in here.