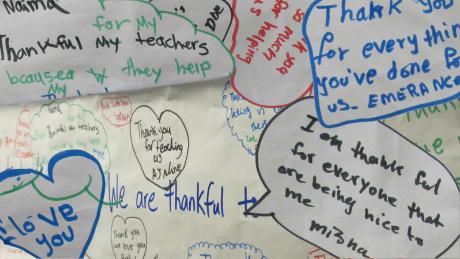 A few of the messages of thanks written by the girls at Global Village School.

What one group of refugee girls is thankful for this Thanksgiving

(CNN)Along a short hallway on the upper floor of Decatur Presbyterian Church in Atlanta, a blue banner stretches across the wall, packed with scrawled messages of thanks and words swelling with appreciation.

The colorful scribbles belong to the 37 students at the Global Village Project, a tuition-free private school housed in the building that serves refugee girls between the ages of 11 and 18. Students at the school have been in the US for three years or less and hail from countries like Bhutan, Burma, Iraq, Syria and Somalia.
In the days leading up to the Thanksgiving holiday, the group of girls gathered to celebrate a core value of the Global Village Project: Appreciation.

Grateful for an education

The banner was just one way they expressed their gratitude. The short messages thank their teachers and the more than 200 volunteers that work at the school.
Read More
One note reads, "I love all of my GVP teachers because they teach us so good and they are so lovely teachers. And they also teach us how to be kind for others."
Ayesha, a GVP student from Pakistan, told CNN she is incredibly grateful to be at the Global Village school because of all the years of learning she missed while in refugee camps in Thailand.
For six years, she said, she was unable to attend classes. So, when she came with her family to the US, she was placed in a school where she struggled to speak and learn in English.
"It was my first year and I don't speak English so well. But this year I get to come to the girls' school," she told CNN. "In my old school, it was like more boys than girls. They talked a lot there so I was not happy to be there. But when I came here, I was so happy and also I got to learn English here and my English is getting so better."
Because of their refugee status, the students at GVP have had interrupted, limited or no education. According to the school, the girls who enter their program -- even those as old as 18 -- typically arrive with delayed reading and math skills and limited or no English proficiency.
Katelynn Villari, the school's counselor, explains that public schools often don't have the resources to give refugee students the intensive support and individual attention that is needed to bring them up to a typical academic level for their age, which makes it extremely difficult for them to succeed and much less likely to attend college.

As the girls sat together during a discussion about Thanksgiving, it became clear there's something else they're immensely thankful for: Slime.
A gooey pink blob passed from one girl to the next as they stretched it from one hand to another. Slime is one of the trendiest toys out there, and like any other group of middle and high-schoolers, the GVP students are prone to hiding it in their pockets only to whip it out and contort it between their fingers while they think teachers aren't looking.
Hadya, a student from Afghanistan, said she would "cry all day" if someone took hers away.
Of course, there's more on her gratitude list than slime.
"I appreciate when my mom buys me stuff I don't have," Hadya said, listing things like school supplies, clothes, and most recently, some fun makeup for her to wear when she plays the drums in an upcoming music show.
To thank her mother, Hadya said she gives her lots of hugs.
Other girls said they are thankful to be close to their family and friends while being resettled in the US. Many also spoke about how hard their parents work so that they can give the girls the things they need.

In another Thanksgiving activity, the girls were invited to express gratitude without revealing their names by writing kind notes and giving them anonymously.
Taking the opportunity to be playful and sneaky, the girls excitedly tried to pass notes to each other without being spotted. Some crawled dramatically behind a friend. "Like a ninja," one girl said. Others tucked the notes in hats, slid them on the desks of distracted teachers, or gave squishing hugs while surreptitiously pressing a sticky note on the back of a classmate.
The activity became a day-long game played in hallways, between classes and during lessons.
When asked how the exchange made them feel, said they felt the notes would probably mean more to someone than just a passing compliment.
"If you just tell them, they'll not care anymore," Hadya told the class.
She also shared why she thought showing others appreciation is so important.
"When you show appreciation, you can be kind," she said. "You can be nice. If you are so mean, when you show appreciation you can change."

Grateful in so many ways

More than 10 countries and 17 different languages are represented among the 37 students at the Global Village Project. The diversity brings brings a rich collection of traditions and perspectives to each group activity.
In class, some of the girls excitedly shared how appreciation is expressed in their home countries. Many of them show respect and kindness to their family through special gestures like cupped hands when receiving or giving something. Others kiss loved ones on the cheeks, use endearing names, or feed guests immediately when they enter their home.
However, after a fiery debate, the jury is still out on whether or not finishing your homework also shows appreciation.