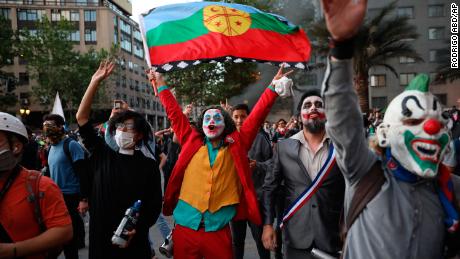 A man dressed as the Joker and holding a Mapuche flag cheers with others dressed in costumes during an anti-government protest in Santiago, Chile, Friday, Nov. 1, 2019. Chile has been facing days of unrest, triggered by a relatively minor increase in subway fares. The protests have shaken a nation noted for economic stability over the past decades, which has seen steadily declining poverty despite persistent high rates of inequality. (AP Photo/Rodrigo Abd)

In protests around the world, one image stands out: The Joker

(CNN)In cities around the world, among the sea of demonstrators who have taken to the streets, one image has stood out: the stark white face and creepy red grin of the Joker.

Artists in Lebanon and Iraq invoked the character on posters or edited him into images on social media.
Someone spray-painted "we are all clowns" onto a statue in Santiago, Chile.
And in Hong Kong, protesters dressed as the Joker as an act of protest in itself, defying a government ban on face masks and face coverings during public gatherings.
Their causes are different, their grievances varied. Proposed austerity measures. Threats to democratic freedoms. Deepening inequalities between ordinary citizens and the ruling elite.
Read More
So why are some protesters in Lebanon, Iraq, Chile, Bolivia, Hong Kong and Spain taking inspiration from a psychopathic killer from a controversial film?

Some see themselves in the Joker

"The Joker is us," Lebanese street artist Mohamed Kabbani told CNN. "... Beirut is the new Gotham City."
In the film "Joker," Gotham City is rife with crime, social services are getting slashed and residents are left feeling powerless and disillusioned, while wealthy elites respond with condescension or obliviousness. One bad day after another slowly drives Arthur Fleck to madness and by the film's end, he's transformed into the Joker -- and ultimately, an unintentional symbol of the downtrodden.
That power struggle between ordinary people and elites, Kabbani said, is what's resonating with protesters in Lebanon.
This street art poster created by the collective Ashekman was put up all over Beirut, Lebanon.
"This is the Lebanese society situation at the moment, full of underdogs, full of oppressed people that are extremely frustrated and that is looking for a window of hope," he said.
Through the Arabic rap and street art collective Ashekman, Kabbani and his twin brother Omar use art to speak out against social and political injustice. So when people in their home city of Beirut took to the streets after a proposed tax on WhatsApp calls, the brothers turned the Joker into a symbol of the demonstrations.
Using their signature style of calligraffiti, they drew the Joker holding a Molotov cocktail. The flames above his head read "72 hours" in Arabic, a reference to the deadline that then Prime Minister Saad Hariri gave political adversaries in Lebanon's coalition government to agree on reforms.
The brothers posted their art on social media and plastered the image around Beirut. But they weren't the only people who saw Gotham City as a stand-in for their home.
Cynthia Aboujaoude, a 28-year-old senior art director in graphic design, showed up to protests in Beirut wearing Joker makeup. It just "felt right," she said.
Cynthia Aboujaoude painted her face to resemble the Joker during a protest in downtown Beirut on October 19.
"It was the one and only thing I thought in the moment I could do to get a message out," she wrote in an email to CNN. "We are hurt and simply disappointed."
People in Lebanon feel the same sense of disillusionment that's depicted in "Joker," Aboujaoude said, and that's precisely why she felt compelled to protest.
"Life now only teaches you to lie and cheat for a living because you simply have no other choice, and that's not a life I want," she said.

Some see it as commentary on their society

In Chile, where people have been protesting rising living costs, low wages, a lack of healthcare and the country's pension system, Valentina Alvarez, a psychologist in the Concepción area, has been going to every demonstration she can.
On October 24, she captured a photo of a fellow protester wearing Joker makeup, holding a sign calling out the country's president, Sebastián Piñera. Since then, Alvarez said she has seen others dressed similarly, adding that she had been wanting to dress up as the Joker herself.
Valentina Alvarez captured a protester in Joker makeup at a protest in Concepción, Chile, on October 24.
Dressing up as the Joker is a response to "how sick our society is," Alvarez said, reflecting both how insignificant people feel and the rebellion that those feelings have awakened.
"Joker is a misunderstood character, vulnerable and abandoned. Chileans, the ones who do not belong to the social privilege class -- which are the majority of us -- feel the same way," she wrote in an email to CNN.

Some use it as a signal to power

"Joker" elicits sympathy for its title character, presenting a cautionary tale about how neglecting society's most vulnerable can result in horrific consequences.
One of the reasons that protesters might co-opt the Joker's likeness is to send a signal to the people in power, said Andreas Beer, a research fellow at HoF-Institute at Martin Luther University of Halle-Wittenberg who has previously written about the use of masks in protests.
"What you're doing when you put on this Joker makeup or Joker mask in a protest, what you're communicating to the government in Hong Kong or in Lebanon, is basically, 'I'm here at the very bottom right now, but be careful what you're doing next,'" Beer told CNN.
A protester in Hong Kong wears a Joker mask during a protest on October 18.

Some use it as a way to get their cause noticed