Fans are already dubbing it the “catch of the year.”

In the second quarter of a game Saturday against the Tennessee Volunteers, South Carolina wide receiver Bryan Edwards made an incredible one-handed catch that caused parts of the stadium to erupt in cheers. 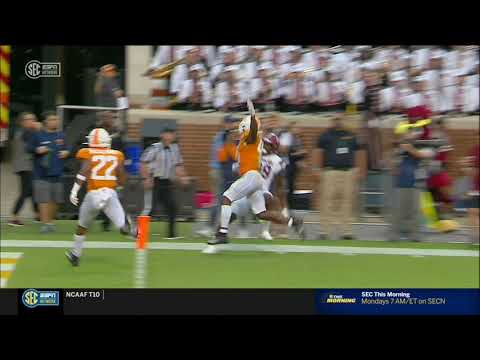 Initially, the catch was called a touchdown. But a review of the play showed Edwards caught the ball just outside the goal line.

Still, there’s a lot to celebrate. The remarkable right-handed grab, along with another one he made during the third quarter, gave Edwards 208 career receptions, propelling him to No. 1 on South Carolina’s all-time list.

“It’s a great feeling any time you can beat a record that was put there by guys like Shannon Sharpe and Alshon Jeffery,” Edwards told reporters after the game. “I still want to win, I still want to break the rest of those records.”

The Gamecocks ultimately lost to the Volunteers 41-21. But the amazing grab drew immediate comparisons to Cleveland Browns star receiver Odell Beckham, Jr., who made a similarly impossible one-handed catch in 2014 as a member of the New York Giants.

Beckham is now famous for his one-handed catches – maybe Edwards soon will be, too.