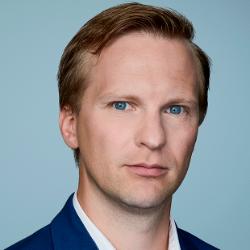 This weekend marks the return of World Series baseball to Washington, and President Donald Trump wants to be a part of it. But unlike in 1933 – the last time the Fall Classic came to the nation’s capital – the President will not be tossing out the ceremonial first pitch.

“I don’t know. They gotta dress me up in a lot of heavy armor. I’ll look too heavy. I don’t like that,” Trump joked on Thursday when asked if he’d throw out the first pitch at Game 5, referencing the bulletproof vest he’d likely have to wear to make such an appearance.

Trump has thrown ceremonial first pitches before, including a 2004 outing at a minor league game in New Jersey where he landed in centerfield in his helicopter and then delivered a fastball for a strike, displaying an impressive arm. A longtime baseball fan who played in his younger days, reportedly being scouted by the Philadelphia Phillies and Boston Red Sox, Trump’s been a fixture at Yankee Stadium, Shea Stadium and Citi Field in New York over the years.

That fandom and lifelong connection to the game makes it surprising that Trump remains the only president to have not thrown out a first pitch to a Major League Baseball game while in office, breaking – so far – with a tradition that stretches back to 1910.

On Opening Day of that year, William Howard Taft threw the first ceremonial pitch in Washington. It was a day that marked the start of two historic baseball traditions: later, Taft accidentally invented the seventh inning stretch when he got on his feet, causing the crowd at Griffith Stadium – assuming the President was departing the game – to stand in anticipation of his departure (or so legend states).

Taft’s Opening Day toss touched off an early season tradition that has stretched for more than a century. While presidents in the 1920s and 1930s often threw out the first pitch before World Series games, a president taking to the rubber during the Fall Classic has been much rarer in recent memory.

The last presidential first pitch before a World Series is game is perhaps the most memorable.

George W. Bush delivered an impressive strike in a triumphant appearance before Game 3 of the 2001 World Series between the New York Yankees-Arizona Diamondbacks. Coming about six weeks after the September 11, 2001, terrorist attacks, it was the first time a president had thrown out the ceremonial first pitch at a World Series game since Jimmy Carter did so in 1979.

Bush – wearing a bulletproof vest underneath a New York City Fire Department pullover – strode to the mound with the words of legendary Yankees shortstop Derek Jeter ringing in his ears.

“He says, ‘Hey, are you going to throw in front of the mound?’ I said, ‘What do you think?’” Bush recounted for ESPN films. “He says, ‘It’s Yankee Stadium, you know? Better throw on top of the mound otherwise they’ll boo you. And just as he’s leaving, he turns around and says, ‘But don’t bounce it. They’ll boo you.’”

Bush waved to the nearly 56,000 fans at the old Yankee Stadium from atop the pitcher’s mound – notably ignoring the pitching rubber set up for him at the bottom of the mound – and gave a thumbs up before winding up and delivering a perfect strike, a fastball over the heart of the plate. The moment – the first World Series game in New York during an emotional playoff run for the Yankees following the collapse of the World Trade Center and deaths of thousands – ended up being both a signature presidential first pitch and one of the high points of the Bush presidency.

Five other presidents have also thrown out first pitches at World Series games, according to Baseball Reference.

Woodrow Wilson became the first president to throw out a first pitch at a World Series game, attending Game 2 of the 1915 World Series between the Boston Red Sox and Philadelphia Phillies.

During the last heyday of Washington baseball – the 1920s and 1930s – Calvin Coolidge and Franklin Delano Roosevelt both tossed out ceremonial first pitches in the World Series. Coolidge threw out the first pitch before Game 1 of the 1924 World Series between the Washington Senators and New York Giants and then again before Game 3 of the 1925 series between the Senators and Pittsburgh Pirates.

Dwight Eisenhower and Carter both threw out first pitches before World Series games in 1956 and 1979, respectively.

All of those first pitches looked vastly different than the ones we’ve come to be familiar with today.

On the final weekend of the 1988 season, Ronald Reagan walked to the mound at Chicago’s Wrigley Field to throw out the ceremonial first pitch before the hometown Cubs took on the Pirates. Reagan was so unhappy with his first effort – high and inside, clearly a ball – that he took another crack at it and lobbed a second toss in order to restore some pride.

It was the first time a presidential first pitch had been thrown from the playing field and forever changed the tradition Taft had begun in 1910.

Prior to Reagan’s pitches in Chicago, all presidential first pitches more resembled a bride tossing her bouquet than an ace rearing back to paint the corner with a four-seamer. Presidents would typically stand in the front row behind the home team’s dugout, sign a baseball and then toss that ball toward the home team, who had gathered in front of the dugout ready to fight over the presidential autograph.

Since Reagan, all presidents have delivered their first pitches from the mound – with varying degrees of success.

George H.W. Bush – who played college ball at Yale and was a lifelong fan – zipped in crisp fastballs throughout his term in office. According to Baseball Reference, he became the first president to attend a baseball game in Canada when he threw out the first pitch before the Toronto Blue Jays played the Texas Rangers in April 1990.

Bill Clinton’s first pitches didn’t have the crispness of his predecessor’s, but the Arkansan consistently got them over the plate, including during the first game at Cleveland’s new ballpark in 1994 – then named Jacobs Field – when his looping strike bested Ohio’s then governor and Hall of Famer Bob Feller, both of whom threw balls.

In addition to his pitch at Yankee Stadium, George W. Bush – who was a part owner of the Texas Rangers before becoming governor of Texas, making him the only team owner to later enter the White House – also threw out two of the most memorable first pitches in Nationals history. He took to the mound for the ceremonial first pitch at RFK Stadium, as Washington welcomed back baseball after a decades-long absence in 2005, and again in 2008 before the first game at Nationals Park.

Trump’s predecessor Barack Obama only made two trips to the mound in his eight years as president, the fewest of any president to serve a full term since Taft (Gerald Ford also threw two ceremonial first pitches, both in 1976, but he served an abbreviated term after Richard Nixon resigned).

Obama – a massive basketball fan – turned in less than stellar outings. His offering at the 2009 All Star Game just about made it to the plate and is probably remembered more for his suburban dad-esque jeans and white sneakers look.

But it’s his first pitch on Opening Day 2010 at Nationals Park that stands out.

Obama walked to the mound clad in a red Nationals jacket and then donned the black cap of his hometown Chicago White Sox, earning boos from the Beltway fans. The South Side southpaw then wound up and delivered a looping pitch that ended up in the left-handed batter’s box, nearly scooting past Nationals legend Ryan Zimmerman.

It was to be his last ceremonial first pitch while in office.