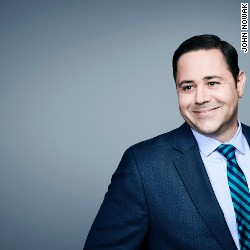 New Jersey wants to revoke the liquor license at one of President Donald Trump’s golf clubs, citing a 2015 incident where the club allegedly overserved alcohol to a 35-year-old man who was later charged with vehicular homicide.

The Trump National Golf Club Colts Neck overserved Andrew Halder, who lived in Bergen County and was golfing with his father in August 2015, a letter sent on Monday from New Jersey’s Division of Alcohol Beverage Control to the club said.

The club, one of three that Trump owns in the state, also violated its permit by allowing the sale of alcoholic beverages other than beer on its golf course beverage carts, the letter said, which The Washington Post first reported.

CNN has reached out to the Trump Organization for comment.

After leaving the golf club, Halder drove, with his father as a passenger in the vehicle, into a curb at the entrance to a highway exit.

“After hitting the curb the car flipped, rolled and the passenger, Gary Halder, was ejected from the vehicle,” the Monmouth County Prosecutor’s Office said in a September 21, 2015 press release.

Gary Halder was transported to a hospital, “where despite medical intervention he eventually died from the injuries he sustained from the collision,” the prosecutor’s office said.

Andrew Halder had been operating the vehicle with a blood alcohol concentrate exceeding the state’s legal limit, the office concluded during its investigation.

The two charges, according to the letter, together carry a presumptive penalty of 25-day suspension. But “due to the aggravating circumstances in this case, the Division (within the state’s Department of Law and Public Safety) will seek the revocation of the license based on the total circumstances,” the letter says.

The Trump National Golf Club Colts Neck has 30 days to enter a “guilty, non-vult (no contest), or not guilty plea.”

It could also place Trump’s two other New Jersey golf clubs, including his Bedminster property, in jeopardy of losing their liquor license. Under New Jersey law, if a license is revoked, the license holder has to give up any other liquor licenses they hold for two years.

“If the suggestion is this is motivated by some other factor other than public safety and what the ABC does, these are career professionals who uphold our liquor laws, who enforce those liquor laws, doing their jobs and have been doing their jobs day in and day out. I trust their judgment on this case and on all cases that they’re doing this without fear or favor,” Grewal told reporters during a news conference in New Jersey.

CNN has reached out to Halder’s attorney for comment.

CNN’s Veronica Stracqualursi and Cristina Alesci contributed to this report.