Emilia Clarke “was too many drinks in” and broke down crying when she met Beyoncé at an Oscars afterparty, she says.

Speaking to Graham Norton, the “Game Of Thrones” star said Beyoncé “got out of there very quickly” when she saw Clarke burst into tears at the sight of her and husband Jay Z.

“I did not expect to see them in the flesh. I wasn’t expecting that at all, I was just amazed to be invited,” Clarke said. “I was like, ‘How did that happen?’ When I met Queen Bey I was too many drinks in and started crying. It didn’t go well. I think she got out of there very quickly!” 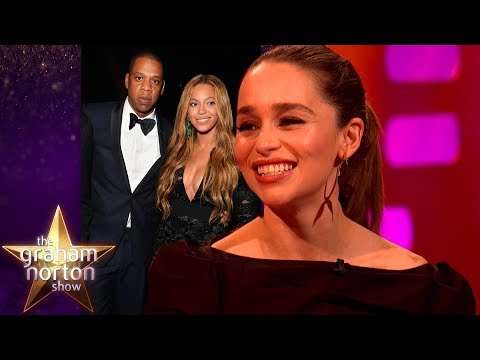 She also discussed playing Daenerys Targaryen on the hit HBO show, saying that despite the acclaim it’s brought, her friends really aren’t impressed.

“It started with things like, ‘We can’t afford to stream ‘Game of Thrones,’ we don’t have the money, sorry Emilia,’ then it was, ‘We’ll try and download it,’ then it was Season 8 and I was having a screening of the last episode and they said, ‘So we’ve seven and three quarter seasons to catch up before this Sunday,’” she said.

Clarke also promoted her upcoming film, “Last Christmas,” and the intense filming schedule which kept her working in London from 12 AM until noon.

“Filming at Christmas in London last year was bonkers,” Clarke said. “Because we were in Covent Garden and Regent Street, we started at midnight and finished at midday and I was in a perpetual sort of hangover state.”