Tesla CEO Elon Musk has warned for years that increasingly intelligent machines will dominate humans and turn us into their pets. But if the latest AI-powered feature from his car company is any indication, we shouldn’t worry.

Two weeks ago, Tesla released Smart Summon, a feature that slowly drives Teslas around parking lots and driveways with no human behind the wheel. The owner sets a destination within 200 feet on Tesla’s app and then holds their finger on the screen for their vehicle to drive to them. The Tesla will stop at its destination, or earlier if the owner lifts their finger from the screen.

Excited Tesla owners have taken to parking lots nationwide to record videos of their cars bumbling like a nervous driver’s ed student. There have been fender-benders, near crashes, ignored stop signs, painfully slow driving and at least one police run-in. Some fearful owners have aborted tests mid-drive. Others have tested two Teslas on Smart Summon in the same place, confusing the cars. Consumers Reports has called the feature “glitchy.” 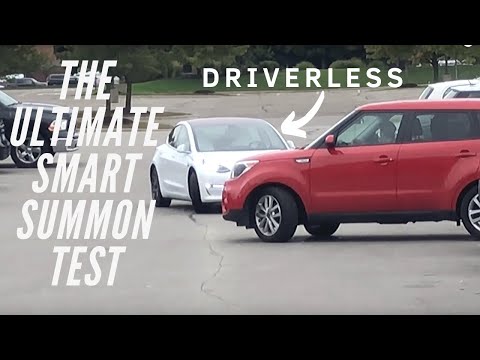 It hasn’t been all bad, though. During rainstorms, Smart Summon users have stayed dry, rather than being soaked walking to a parking spot. Tesla owners have been delighted by the novelty of seeing their vehicle drive itself. Smart Summon has been used more than 550,000 times, Musk said on Twitter. Smart Summon may be the best glance the average person can get of the potential future of transportation, in which vehicles drive without a human behind the wheel.

“I’m blown away,” said one Tesla owner, after watching his Tesla drive slowly behind a group of pedestrians. “That was fantastic. Scary and terrifying but fantastic.”

But there’s a long way to go. Tesla (TSLA) cautions that Smart Summon should only be used in private parking lots and driveways. Tesla (TSLA) owner are told that they’re responsible for their car and must monitor it. Some videos have shown close encounters with pedestrians, curbs and light posts.

“It may not detect all obstacles,” Tesla cautioned when it released the update. “Be especially careful around quick moving people, bicycles and cars.”

The cars in Smart Summon mode often drive down the middle of parking lot aisles, rather than hug the right side like a typical driver. The Teslas also take corners slowly, or sometimes too fast — not halting for stop signs. Speeds bumps can confuse the technology.

Tesla owners use a map in the app to tell the car where to go. But sometimes the aerial imagery is out of date, making it harder to understand where you’re telling the car to go. Even when the map is accurate, the cars don’t necessarily stop at the perfect spot.

Smart Summon is a classic Wild West technology, and regulators might crack down on it. The National Highway Traffic Safety Administration felt moved to weigh in, saying it’s studying the feature and won’t hesitate to act if a safety defect is found. Tesla has a habit of giving customers imperfect new features that can be misused. Its Autopilot software, which steers, accelerates and slows down the car in some settings, has been criticized by the National Transportation Safety Board for not being restricted to suitable roads.

MIAMI, FLORIDA - APRIL 04: A Tesla showroom is seen on April 04, 2019 in Miami, Florida. Tesla announced a first quarter 31% drop in vehicles that were delivered to customers compared to the prior quarter. The news caused the stock to drop approximately 8%.(Photo by Joe Raedle/Getty Images)
Joe Raedle/Getty Images

How insurers handle Smart Summon is also unclear. The technology is so new that insurance issues are still being worked out, according to a spokesman for the Insurance Information Institute.

Major insurance companies such as State Farm, Geico, Providence, Liberty Mutual and Nationwide declined to comment. An AllState spokesman said claims would be handled on a case-by-case basis.

So for now, don’t be surprised to see an empty Tesla roaming a parking lot near you, maybe even with a humorous prop behind the wheel.

As one Tesla owner described his experiences — “Everybody loves it, whether the skeleton’s in it or not.”