John B. Goodenough just became the oldest person, at 97, to win a Nobel Prize

By Allen Kim, CNN
Updated 3:25 PM EDT, Wed October 9, 2019
Ad Feedback
Video Ad Feedback
Latest Videos
Now playing
01:02
What you should know about the Nobel Prize
CNN
Now playing
02:21
'Embarrassed at low price': Bolton reacts to alleged Iranian murder plot against him
CNN
Now playing
06:07
The Taliban wants women in Afghanistan to wear a Niqab. That isn't really happening
CNN/Pool
Now playing
02:38
Mom who confronted Alex Jones says he slipped her a note at trial
Now playing
02:16
Single polio case in New York may be 'very, very tip of the iceberg,' CDC official says
@BetoMedia
Now playing
01:34
'Not funny to me': O'Rourke curses at heckler over guns
CNN
Now playing
02:42
'Never seen anything like this': Violent posts increase online after FBI Mar-a-Lago search
In this photo taken from video a view of a destroyed barrack at a prison in Olenivka, in an area controlled by Russian-backed separatist forces, eastern Ukraine, Friday, July 29, 2022. Russia and Ukraine accused each other Friday of shelling a prison in a separatist region of eastern Ukraine, an attack that reportedly killed dozens of Ukrainian military prisoners who were captured after the fall of a southern port city of Mariupol in May.
AP
Now playing
04:48
'Bring back our sons': Ukrainians desperate for answers after attack on war prisoner camp
CNN/Getty Imags
Now playing
01:28
Ex-Trump attorney: What Trump fears the most about the FBI search
Getty Images/CNN
Now playing
02:01
'Appalling coward': George Conway reacts to video of Lindsey Graham
AFPTV
Now playing
01:49
Video shows how rescuers tried to save beluga whale stuck in river
CNN
Now playing
03:46
'Anti-American': New York mayor reacts to migrants being sent to New York on buses
DURHAM, NC - FEBRUARY 17: Former National Security Advisor John Bolton discusses the "current threats to national security" during a forum moderated by Peter Feaver, the director of Duke's American Grand Strategy, at the Page Auditorium on the campus of Duke University on February 17, 2020 in Durham, North Carolina. A sold out crowd joined to listen to reflections from John Bolton's life's work. Questions from the audience were offered to Bolton by the moderator. A scheduled protest was held outside while attendees lined up for entrance. (Photo by Melissa Sue Gerrits/Getty Images)
Melissa Sue Gerrits/Getty Images North America/Getty Images
Now playing
03:21
Inside the alleged plot to have Bolton assassinated
Now playing
02:32
Why Trump spent so much of his presidency at Mar-a-Lago
Getty Images
Now playing
01:21
FBI's search has 'changed calculus' going into 2024, GOP official says
CNN
Now playing
02:10
Gergen on Trump pleading the Fifth: In the end, he will have to come clean
cnn.com
Now playing
06:22
These documents are 'Rosetta Stone' of FBI's Mar-a-Lago search, Honig says
CNN  —

Most 97-year-olds would probably feel accomplished just getting out of bed in the morning. John B. Goodenough, 97, just won the Nobel Prize in chemistry.

Goodenough won the award alongside Stanley Whittingham and Akira Yoshino for their contributions to the development of lithium-ion batteries.

Goodenough is the oldest person to win a Nobel Prize. Arthur Ashkin was the previous record holder, having won the Nobel Prize in physics in 2018 at age 96.

“Live to 97 (years old) and you can do anything,” Goodenough said in a statement. “I’m honored and humbled to win the Nobel Prize. I thank all my friends for the support and assistance throughout my life.”

Announcement of the Nobel Prize in Chemistry 2019 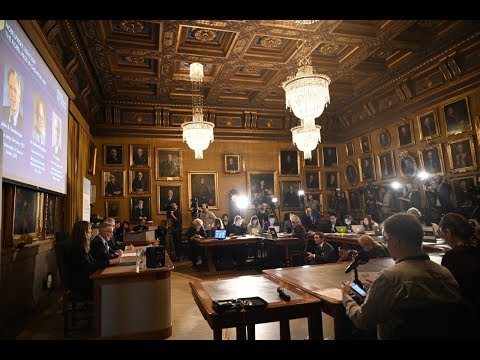 It was at Oxford that Goodenough made the groundbreaking discovery that helped him win the Nobel, UT Austin officials said in a news release.

‘The foundation of a wireless, fossil fuel-free society’

Whittingham developed the first functional lithium battery in the early 1970s, but Goodenough was able to double the battery’s potential in 1980 by using lithium cobalt oxide as the cathode of a lithium-ion battery, the foundation said. Using Goodenough’s cathode as a basis, Yoshino created the first commercially viable lithium-ion battery five years later.

“Lithium-ion batteries have revolutionised our lives since they first entered the market in 1991,” the Nobel Foundation said in a statement. “They have laid the foundation of a wireless, fossil fuel-free society, and are of the greatest benefit to humankind.”

From laptops to smartphones, lithium-ion batteries power some of the most commonly used devices. Electric vehicles were made possible because of the development of these batteries, and wireless communication has flourished because of the technology.

“I’m extremely happy the lithium-ion batteries (have) helped communications around the world,” Goodenough said Wednesday in a conference call with reporters. “We are indeed happy that people use this for good and not evil.”

Goodenough serves as the Virginia H. Cockrell Centennial Chair of Engineering in the Cockrell School at UT Austin.

Even at the age of 97, he continues to develop new polymers and battery concepts with researchers in his lab. He is now largely focused on developing all-solid-state batteries as they can offer better safety, according to Arumugam Manthiram, a longtime colleague from UT Austin.