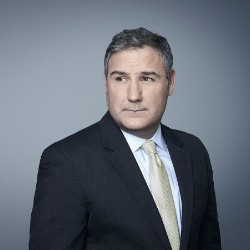 Former Vice President Joe Biden will stand center stage, flanked by Vermont Sen. Bernie Sanders on his right and Massachusetts Sen. Elizabeth Warren to his left, for the next presidential debate, which will also feature a new face and a returning candidate among the dozen Democrats onstage vying for their party’s nomination.

The stakes are incredibly high for the candidates participating in the CNN/New York Times Democratic presidential debate on October 15, as several candidates will likely need a breakout performance to remain competitive in this crowded primary field. For businessman Tom Steyer, it will be his first presidential debate, while Hawaii Rep. Tulsi Gabbard returns to the stage after failing to qualify for the September debate.

The 12 campaigns were required to submit paperwork to the DNC Wednesday morning certifying that their respective candidate achieved the fundraising and polling thresholds required to participate in the October debate. To receive an invitation to this debate, candidates needed to attain at least 2% in four separate DNC-approved polls and receive contributions from at least 130,000 unique donors, including at least 400 donors from 20 different states.

For the November debate, the polling and contribution thresholds will be raised to require candidates to achieve 3% in four DNC-approved polls, and the number of unique donors needed increases to 165,000 people. The November criteria is likely to shrink the number of candidates eligible to participate in DNC-sanctioned debates after October – placing Democrats who fail to reach the new thresholds in political jeopardy.

The podium order for the CNN/New York Times Democratic presidential debate was determined based on an average of the 10 most recently released qualifying polls. Candidates with the highest averages were placed in the center of the stage with those with lower polling averages assigned podium positions to the left and right.

The October 15 debate will air exclusively on CNN, CNN International, CNN en Español, and stream on CNN.com’s homepage and NYTimes.com’s homepage. In addition, the debate will be available across mobile devices via CNN’s and New York Times’ apps for iOS and Android, via CNNgo apps for Apple TV, Roku, Amazon Fire, Chromecast and Android TV, SiriusXM Channels 116, 454, 795, the Westwood One Radio Network, Alexa Amazon, National Public Radio and stream on Facebook.