Britain’s Duke of Sussex has made “a particularly significant and poignant journey” during his 10-day tour of southern Africa, when he honored his mother’s legacy on Friday by returning to the exact site of his mother’s famous minefield walk.

With the world’s media looking on, Harry slowly walked down the street which was the site of the Angolan minefield Princess Diana visited in 1997. At one point, the duke walked over to a tree, the only thing that remains from the original site. There, he paused for a moment of reflection.

“It’s been quite emotional retracing my mother’s steps along this street 22 years on … and to see the transformation that has taken place from an unsafe and desolate area into a vibrant community of local businesses and colleges,” Harry told the de-miners, local residents, school children and media assembled in what is now known as “Princess Diana street.”

Prince Harry is following in the footsteps of his late mother, Princess Diana, through the site of a former minefield.
Getty Images/Pool via AP

Admired for her humanitarian work, Princess Diana championed the issue of landmine clearance when she visited the country’s second city of Huambo 22 years ago with The HALO Trust. The city was one of Angola’s fiercest battlegrounds during the country’s 27-year civil war – its land contaminated with the weapons.

Photographs from 1997 of Diana wearing protective gear as she was escorted through a cleared lane in the live minefield and comforting child amputees sparked global efforts to end the production and use of the weapons. She died only a few months before an international treaty prohibiting landmines was drafted and signed.

Harry stressed the importance of international cooperation in the area, but said “none of this progress would have been possible without the spirit and unwavering determination of the Angolan people.”

“The work of de-mining is dangerous, expensive and laborious. And I have the utmost admiration and respect for all who do this hazardous work and risk their lives in the service of their country,” he said, dressed in a HALO Trust T-shirt.

Before heading to Huambo, Harry made his way through a partially cleared minefield before detonating an anti-personnel mine in a controlled explosion near the southeastern town of Dirico.

“The results we have now is because of Diana’s input. She made the donors aware that the international community is also part of this problem and that they could help,” HALO Angola’s Operations Manager Valdemar Goncalves Fernandes told CNN. “We don’t produce ammunition and mines in Angola.”

Prince Harry sits for a moment of reflection beneath a tree that is all that remains from the original site where his mother visited 22 years ago.
Dominic Lipinski/AP

Fernandes, 45, is the only current HALO staff member who was working as de-miner at the time of Diana’s visit, having joined the charity a few weeks before. The then-23-year-old had been deployed to a nearby minefield on the day the princess visited and watched the footage on a news bulletin after his shift, as the trip had been kept secret.

Originally from Huambo, Fernandes lived in the city throughout the brutal conflict – which ended in 2002 – including two phases of siege and heavy fighting. He recalled a particularly perilous period from December 1994 when the city was held by UNITA rebels. Hunger and fighting were prevalent and forced conscription into militia forces was a constant threat, he said.

The painstaking process of mine removal from the spot Diana visited was suspended after her trip in 1997 due to the changing situation in the war-torn country. Fernandes supervised its completion between 2004 and 2005.

On Friday, Fernandes was tasked with greeting Harry at the site. He said it came as “a great surprise when I was told I would meet Prince Harry in the exact place where Princess Diana visited 22 years ago.”

Harry and Meghan’s private secretary Samantha Cohen said in a statement ahead of the trip that it would be “a particularly significant and poignant journey” for the Duke of Sussex.

She added that the 35-year-old royal would get to “see how an area that was a dangerous minefield in 1997 is now a busy street with schools, shops and houses – a demonstration of the benefits of de-mining.”

After visiting the former minefield, Harry headed to the Huambo Orthopaedic Centre – another place his mother visited two decades ago.

The prince met patients at the clinic, visiting its rehabilitation room and prosthetics workshop. Speaking to the assembled doctors and medical staff, Harry said his mother’s legacy lives on at the facility, which has recently undergone renovations and was renamed in honor of Diana during Harry’s visit.

Felisberto Cambonguele, 50, is chief of the prosthetics department. Having worked at the clinic for the last 32 years, he vividly remembered the day a princess came to visit.

He told CNN that the hospital’s staff were taken back by Diana’s laid-back manner. “We started to think that the princess would be extremely well-dressed [and that] she would be wearing a crown,” he recalled. Instead the woman who arrived “seemed like the most loving person.”

“She had contact with our patients, touched our children who were also receiving treatment… it was an unimaginable joy,” he said. “So many of us only became aware much later that she was a princess because she presented herself with so much humility.”

Cambonguele said Diana’s visit encouraged residents to take precautions in addition to the increased efforts by NGOs to de-mine the land.

Angola’s protracted conflict left up to 1.5 million people dead, according to the CIA World Factbook. Around 4 million people were forced to flee their homes and left internally displaced, more than half of them children, the United Nations said.

Removal of landmines in the years since Diana’s trip has permitted the displaced to return to their communities to rebuild towns and construct hospitals, schools and homes, according to HALO. 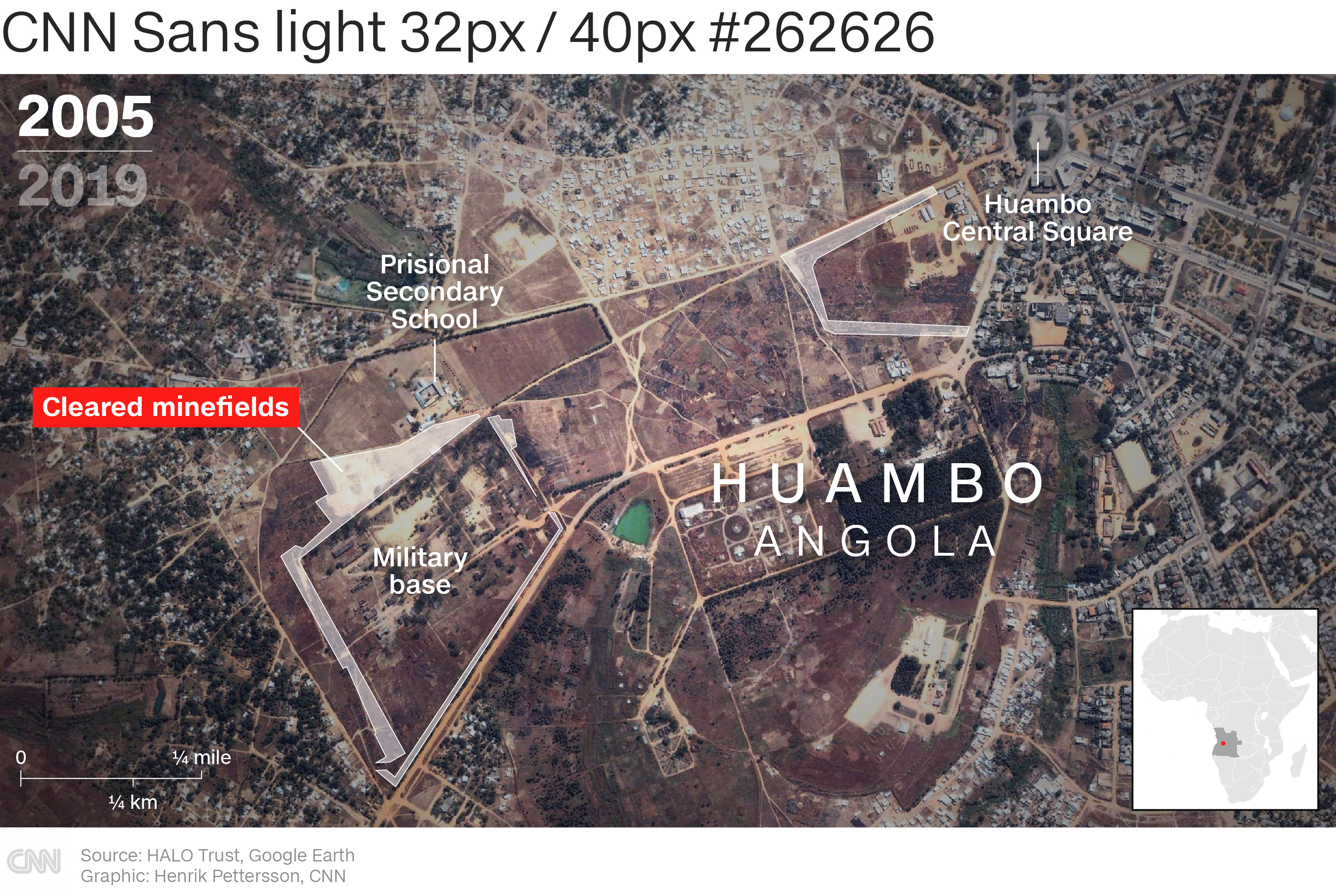 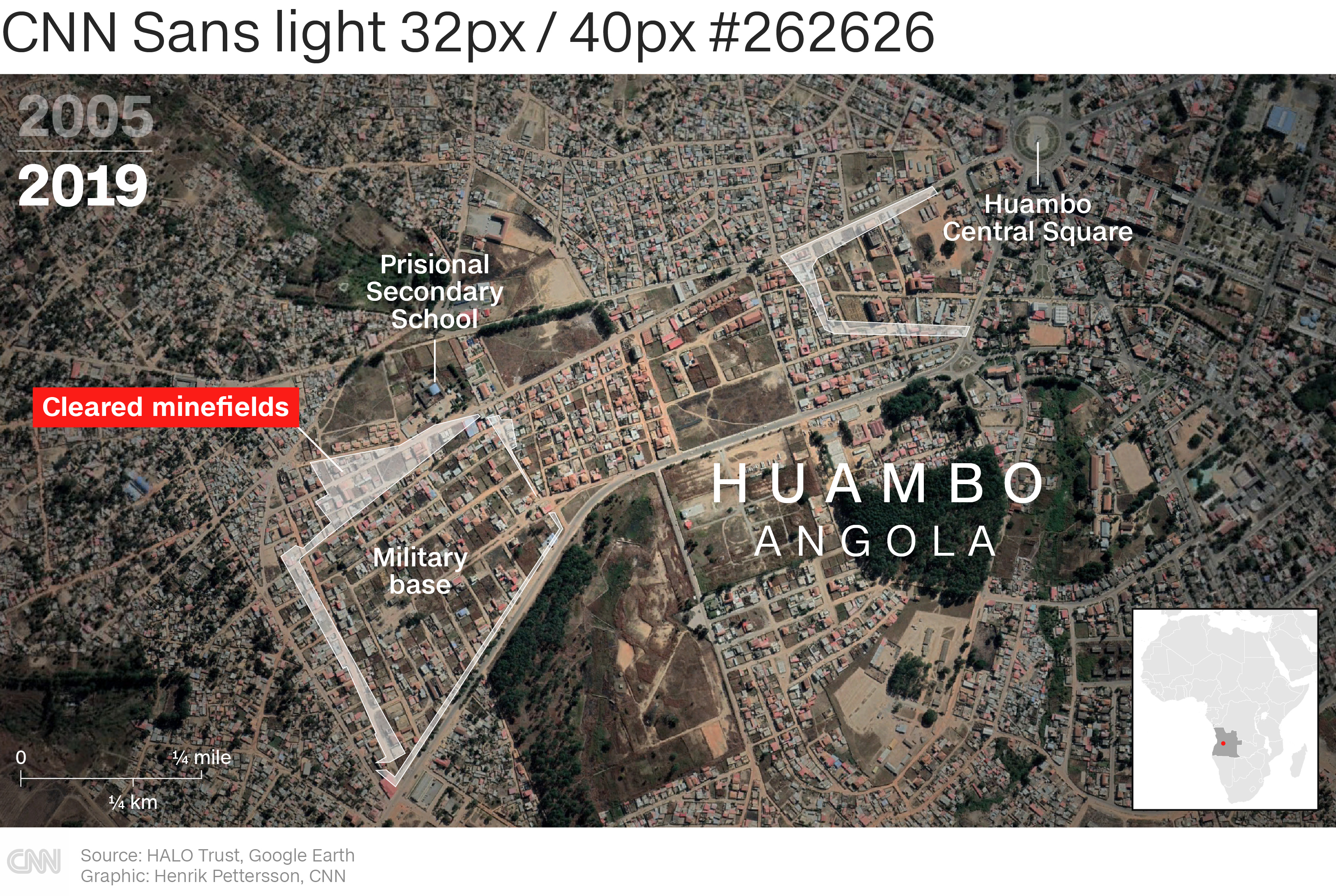 Yet despite all the work to destroy landmines in Angola, more are still being found.

In October 2016, Manuel Rodriguez, then eight years old, was out with a group of friends. They were picking mangoes and playing under a tree about 800 meters from his home when they found a metal object and began kicking it about like a football. The blast killed Manuel’s 10-year old cousin Frederico and so severely wounded Manuel that his left leg had to be amputated below the knee.

“I felt angry at first,” Manuel’s mother Ermelinda told CNN. “The war ended a long time ago. A lot of people pass by that spot. There are always a lot of people there and they had never found that. It had to be on the day when the children were there.”

Manuel – who will also meet Harry on Friday – was taught to use a prosthetic at the Huambo Orthopaedic Centre and will return to be fitted for new prosthetics as he grows up. Since the accident, he has mastered his crutches and returned to his old school.

Nearly 100,000 landmines have been destroyed since HALO began its operations in Angola in 1994, the group said. In May, the national mine authority estimated that 1,104 minefields remain to be cleared in Angola, at a cost of almost $263 million.

Harry walks through a minefield in Dirico, Angola, on Friday, before traveling to the site of his mother's famous photos.
Dominic Lipinski/Pool/Getty Images

HALO has been leading a charge to free Angola of all its mines by 2025. But with the current rate of funding, it said the threat of landmines would continue to plague its lands until closer to 2046.

Even with the vast amount of work still to be done, just 12 months ago HALO seriously considered shutting down its Angola outfit, citing massive donor fatigue. The charity said funding for landmine removal had dropped from $48.1 million in 2006 to a record low of $3.1 million in 2017, with the majority of donations coming from the US.

However, two things turned it around, the organization said. The first was a powerful speech from Harry in June urging governments to assist in finally clearing Angola; the second was a massive $60 million funding initiative from the country’s government.

Through the Okavango Headwaters project, the hope is to clear landmines from two of the country’s national parks, renewing and preserving a vital transnational ecosystem stretching across Namibia, Angola and Botswana. Harry launched the project while visiting Dirico earlier on Friday.

“People have forgotten the war, but the mines are still there. We need them to be removed,” Fernandes said. “All of these items came from abroad – from western countries. I still think that the international community needs to engage a bit more to finish this problem once and forever.”