A new billionaire has been minted nearly every day during the pandemic
Why Insider's global editor-in-chief decided to publish the sexual harassment allegation against Elon Musk
Nissan is launching a comeback. Here's what it's like road tripping in its newest sports car
Something isn't loading properly. Please check back later.

Remember that robot dog that went viral a few years ago? The one that can run uphill, climb stairs, and looks like the killer robot dogs in the TV show “Black Mirror”? It’s now available for select customers.

Boston Dynamics, the company behind the dog, which is named Spot, released a video on Tuesday advertising its launch. It shows Spot navigating challenging terrain, picking up construction objects, moving through bad weather, and picking itself up after a fall.

The video and the product launch page also show off Spot’s capabilities – for instance, it can run at 1.6 meters per second (about 5.2 feet per second), has 360-degree cameras that give it a full range of vision, is dust- and water-proof, and can operate in temperatures ranging from -20 to 45 degrees Celsius (-4 to 113 Fahrenheit).

Unfortunately for people hoping for a new robot pet, Spot isn’t available for everyone. It’s being shipped to “select early customers” to be used in construction sites, gas and power installations, and in public safety, according to Boston Dynamics. To get one, companies in those industries need to submit an application on the site. 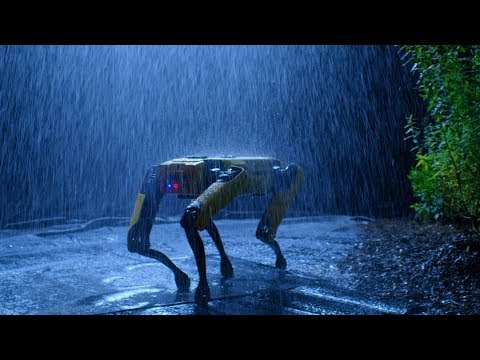 There’s no price listed, but roboticists have estimated that it could cost as much as a new car.

Boston Dynamics first introduced Spot in 2015, when it was still in development. That first viral video collected 22.7 million views, and additional videos of Spot have continued to draw millions of views over the years. After all, this is a robot dog who can twerk and moonwalk, and who won over sympathy on social media when the company released a video of researchers kicking the dog to demonstrate its balance.

Spot also has a little brother – SpotMini, which stands at two and a half feet (about 0.76 meters). It can roll over, put objects in a dishwasher, open doors, and bring its owner a cold drink from the fridge. SpotMini is also set to become commercially available in 2019, the company said last year.

Some of Boston Dynamics’ other products are a little less cuddly. Using funding from the federal Defense Advanced Research Projects Agency and the United States Marine Corps, Boston Dynamics has also developed quadruped robots that can follow soldiers and carry 400 pounds of gear. Another robot, funded by the US Army, can jump 30 feet high and is designed for reconnaissance.

It seems like Spot and SpotMini in particular have captured a special place in the popular imagination – and people are torn on whether to feel inspired or terrified. On the one hand, people often anthropomorphize Spot, as evidenced by the controversy over the Spot-kicking video. “Kicking a dog, even a robot dog, just seems so wrong,” one person wrote on Twitter. It’s easy to understand why – it moves just like a real dog, lying down on the rug and staggering after losing its balance.

Is it cruel to kick a robot dog?

On the other hand, the pop culture trope of robot uprisings and depictions of robot-inflicted violence (like the Black Mirror episode) have also caused alarm. A parody video of robots fighting back against its “Bosstown Dynamics” operators gained 10 million views, and even Boston Dynamics CEO Marc Raibert joked in 2017 that a new product was “a nightmare inducing robot.”

Boston Dynamics started in 1992 as a spinoff from the Massachusetts Institute of Technology, and was purchased by Google in 2013. Four years later, Google sold Boston Dynamics to Japan’s SoftBank – one of the companies behind Pepper, which has been billed as the world’s first robot capable of reading human emotions.