Imagine driving at speeds so fast that it feels like a 45 kilogram dumbbell is pressing against your head, and you’re wearing so much heavy gear that you’re quickly drenched in sweat.

That’s what Formula One drivers will be experiencing this weekend during the only full night race of the F1 season in Singapore, a city-state known for its heat and humidity that has recently been cloaked in haze from fires in Indonesia.

“(Singapore) is a very tough race, I think physically it’s the hardest one of the calendar as it’s very humid and long … and it’s a street race so your mind is working flat out,” said rookie British-Thai driver, Alex Albon, who Red Bull promoted to its Formula One team from sister squad Toro Rosso earlier this year.

Albon is aware of how much pressure his mind and body are under as he works the tight corners in Singapore. And, as one mistake can kill any driver’s chances of climbing up the leader board, Albon said he will look to minimize the risks in Singapore, by focusing his driving skills in the practice sessions up to the qualifying race.

Since Formula One’s transition into a blockbuster business in the 1990s, a sizable chunk of a driver’s time is taken up with the fanfare of meeting fans, sponsors and the media.

“Formula One is a very unique sport. For example, media has access to the drivers four minutes before they have to get in the car and race. I don’t think any other sport has that kind of access,” said Michael Italiano, Daniel Riccardo’s performance coach at Renault.

All that leads to the need for drivers to have two characters, one that juggles the demands of the business and the other that focuses on the sport, Italiano said.

“You have to be quite durable as an athlete,” he added.

All eyes on drivers

As one of the world’s most-watched annual sporting events, F1 drew 490 million unique television viewers in 2018, according to a Formula One statement.

Since its inaugural race in 2008, more than 490,000 international visitors have descended on Singapore for the grand prix, helping the city-state generate over $1.4 billion in tourism receipts, according to Jean Ng, executive director of sports at the Singapore Tourism Board.

And while the stereotype of petrol heads, roaring engines and a hefty carbon footprint cloud the image of F1, for the die-hard and emerging class of fans who closely follow the sport, the grand prix is about so much more.

It promises the the drama of a high-speed race, and a bonanza of weekend entertainment, which includes everything from concerts with A-list singers to luxurious parties.

The chance to meet a driver in the flesh also remains a draw for many.

In a tight, winding corridor in the Formula One paddock area, five-time world champion Lewis Hamilton zips by on his scooter. He’s just come from a driver signing session, where eager fans have crowded into a VIP suite in the hope of taking a photo or getting a piece of racing memorabilia signed by team driver.

Amongst them is 19-year-old Singaporean Putera Dyann, who grew up watching the sport with his father, a McLaren supporter.

Dyann won a spot at the coveted signing event by coming second place in a simulated racing competition held earlier this month by Singapore GP organizers. Dyann faced off with dozens of other competitors, each gunning for the fastest speed for eight laps around a computerized circuit. 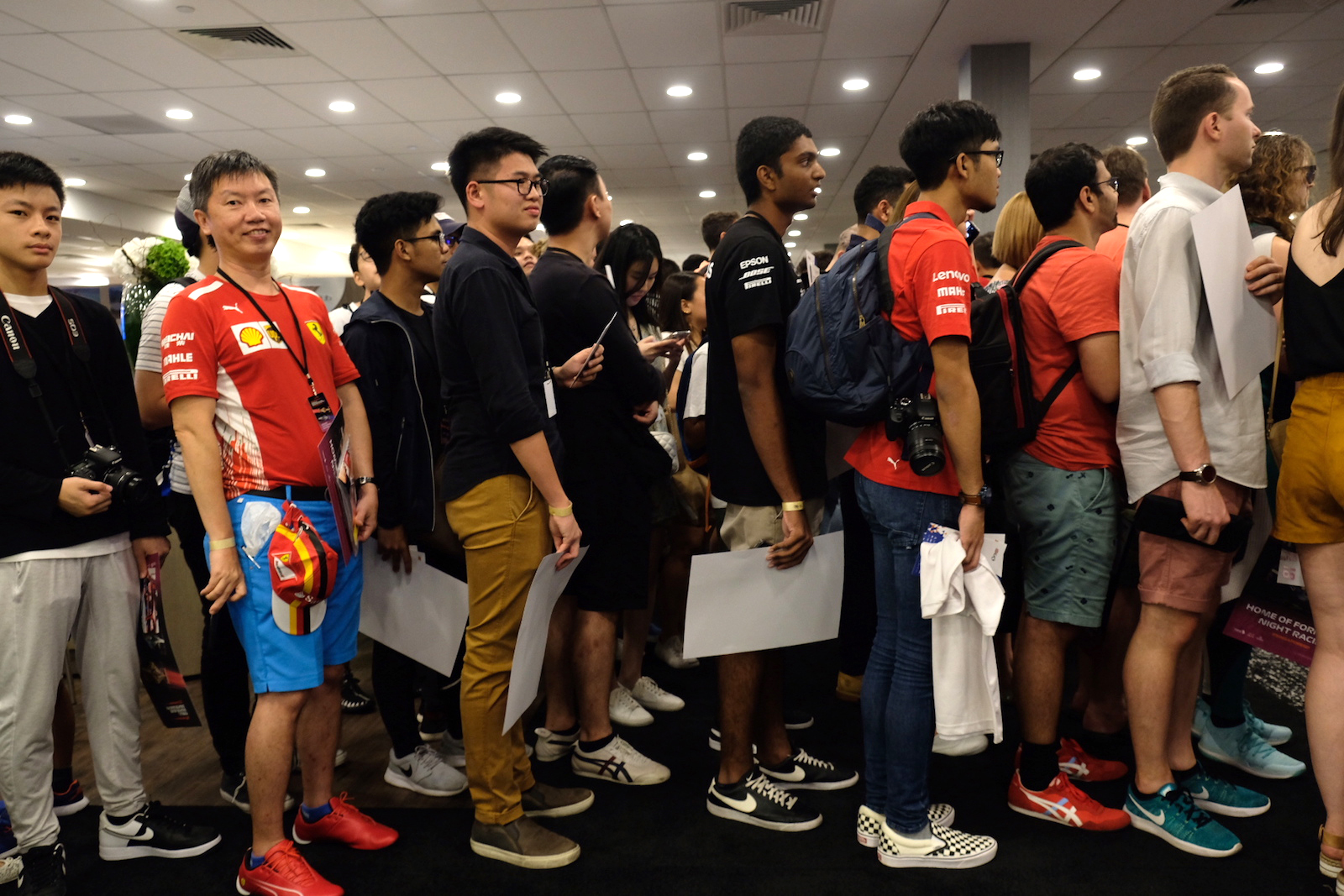 Fans queue to get a photo with their favorite driver. 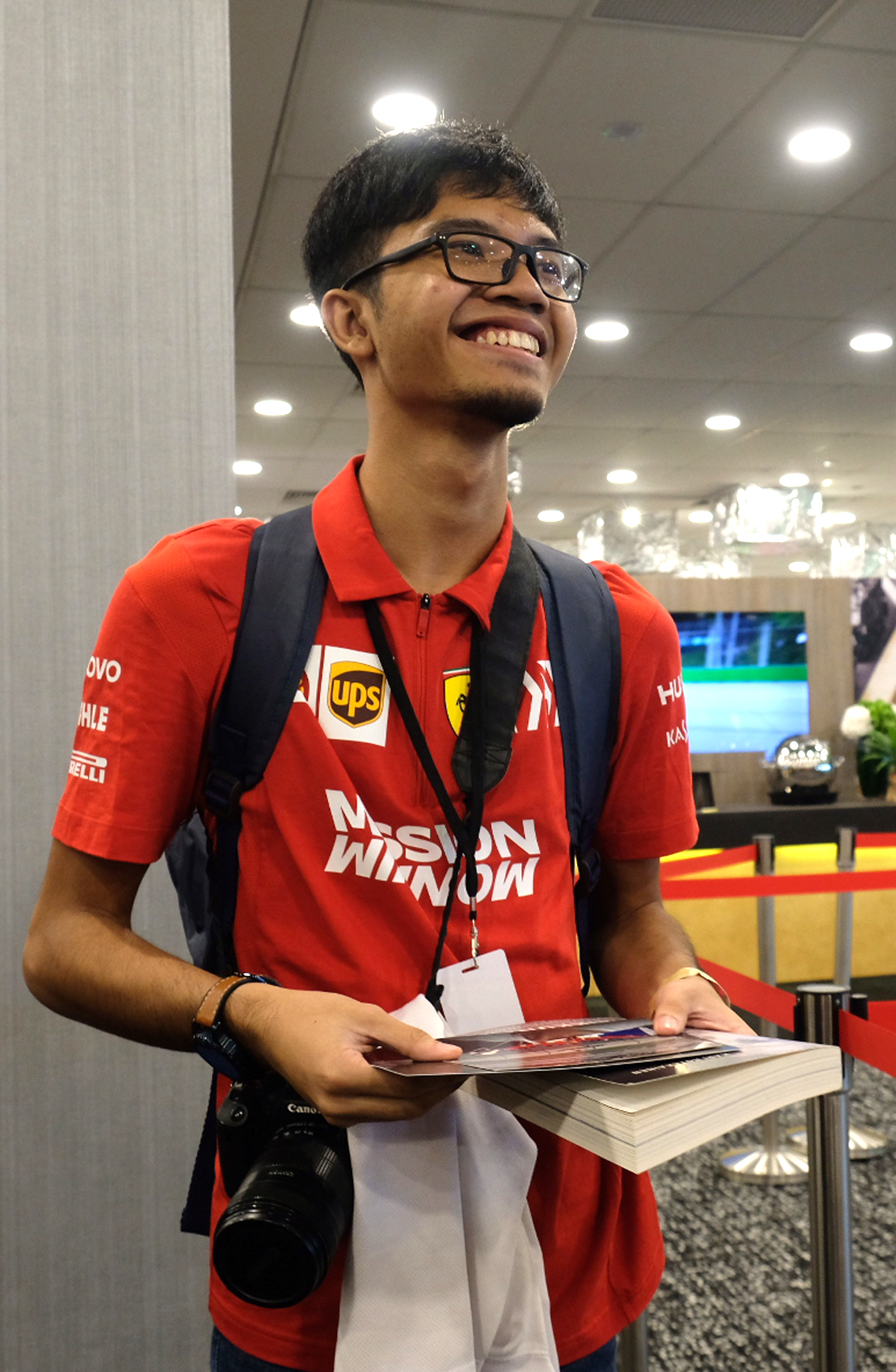 Inside the VIP suite, Dyann clutched a freshly signed poster by Alfa Romeo driver Kimi Raikkonen, and his own steering wheel.

“I’m waiting for Ferrari, I mean that would be the ultimate if any of the drivers signed my steering wheel,” said Dyann. “I don’t think some of the drivers like doing this, but I think some like the chance to engage with their fans.”

Dyann is just one type of emerging fan that the new rights holders of F1, Liberty Media, want to tap into.

Since buying the commercial rights for F1 from longtime British supremo Bernie Ecclestone in 2017, the American mass media company has made fan engagement a priority. As a consequence, they have loosened some of the strict rules that bound drivers and their teams.

Their focus has shifted on building the brand, with origins in Europe, through digital and social media platforms, and lifting its appeal to a new generation of younger, global fans.

“Liberty Media liberalized the regulations around social media, and this allowed drivers like Lewis Hamilton to start Instagramming and Snapchatting from the pits, from the car and so on and so forth,” said Aled Rees, a managing director of consultancy firm, CSM Sports and Entertainment.

The surge shows something is working. Rees says the extra connectivity gives fans instant behind-the-scenes access to drivers and teams of their choice.

Fireworks light up the sky at the Singapore GP.
Dyan's

But such immediate global exposure comes with its own set of challenges. With their every move monitored on and off the circuit, and with an array of entertainment options on hand, the distractions are endless.

“Daniel knows when to be on, and when he needs to be off, but I also keep him accountable, so when I see him on his phone when he doesn’t need to be, I’ll pull him up and tell him to rest his brain,” said Italiano.

Albon, who was just in Thailand to meet the prime minister before flying to Singapore, says all the distractions of publicity and fans fade into the background once he’s behind the wheel and on the track.

“There’s a couple of laps where everything connects and you’re in a hyper-focused state – it is intense, but we thrive for that feeling.”