Tom Hanks hadn’t really watched “Mister Rogers’ Neighborhood” until a few years ago. But when a friend sent him a clip of the show from 1981, he was moved to tears.

“Fred is just so wonderfully gentle and present [with] someone who normally would make [most people] feel uncomfortable,” Hanks said Sunday at a Toronto International Film Festival screening of his film, “A Beautiful Day in the Neighborhood,” in which he plays Rogers. “What do you say to somebody who will spend their life in a wheelchair? He said, ‘Jeff, do you ever have days when you’re feeling sad?’ He says, ‘Well, yeah, sure Mister Rogers. Some days…but not today.’”

Rogers and Erlanger then sang “It’s You I Like” together.

“It made me bawl my eyes out,” Hanks told the crowd. “It was just so [amazing]. It’s one of the reasons why I’m in the movie.” 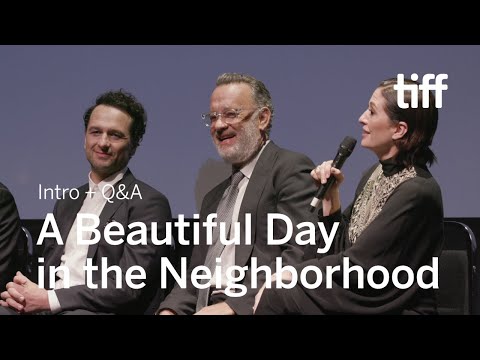 “I think cynicism has become the default position for so much of daily structure and daily intercourse,” he added. “Why? Because it’s easy, and there’s good money to be made. It’s a great product to sell – cynicism. It’s the perfect beginning of any examination of anything, as far as conspiracy theories or what have you.”

Hanks continued, saying the message Rogers was sending to children was necessary.

“I think that, when Fred Rogers first saw children’s programming, he saw something that was cynical. And why in the world would you put a pipeline of cynicism into the minds of a two or three-year-old-kid? That you are not cool because you don’t have this toy, that it’s funny to see somebody being bopped on the head, that hey, kids be the first in line in order to get blah, blah, blah. That’s a cynical treatment of an audience, and we have become so inured to that that when we are met with as simple a message as hey, you know what, it’s a beautiful day in the neighborhood, [it’s a reminder] that we are allowed…to start off feeling good.”