Brazil’s Amazon rainforest is in flames, burning at the highest rate since 2013, when that nation’s space research center first began tracking fires there.

Here’s what we know.

How big is the Amazon rainforest and what does it matter?

The world’s largest rainforest, the Amazon spans eight countries and covers 40% of South America – an area that is nearly the size of two-thirds of the US, according to the World Wildlife Fund. More than 30 million people live in the Amazon, which is also home to large numbers of mammals, birds, amphibians and reptiles, most of them unique to the region. A new plant or animal species is discovered there every two days.

The Amazon forest, which produces about 20% of earth’s oxygen, is often referred to as “the planet’s lungs.”

An inferno in the Amazon, two-thirds of which is in Brazil, threatens the rainforest ecosystem and also affects the entire globe.

What is happening and when did it begin?

Since the beginning of 2019, Brazil’s National Institute for Space Research (known as “INPE”) has reported 72,843 fires in the country, with more than half of these being seen in the Amazon region. This means more than one-and-a-half soccer fields of Amazon rainforest are being destroyed every minute of every day, INPE has stated.

An 80% increase in deforestation has occurred so far this year compared to last year, according to the institute.

Evidence of the fires also comes by way of a map created by the European Union’s satellite program, Copernicus, that shows smoke from the fires spreading all along Brazil to the east Atlantic coast. Smoke has covered nearly half of the country and has begun to spill into neighboring Peru, Bolivia and Paraguay. 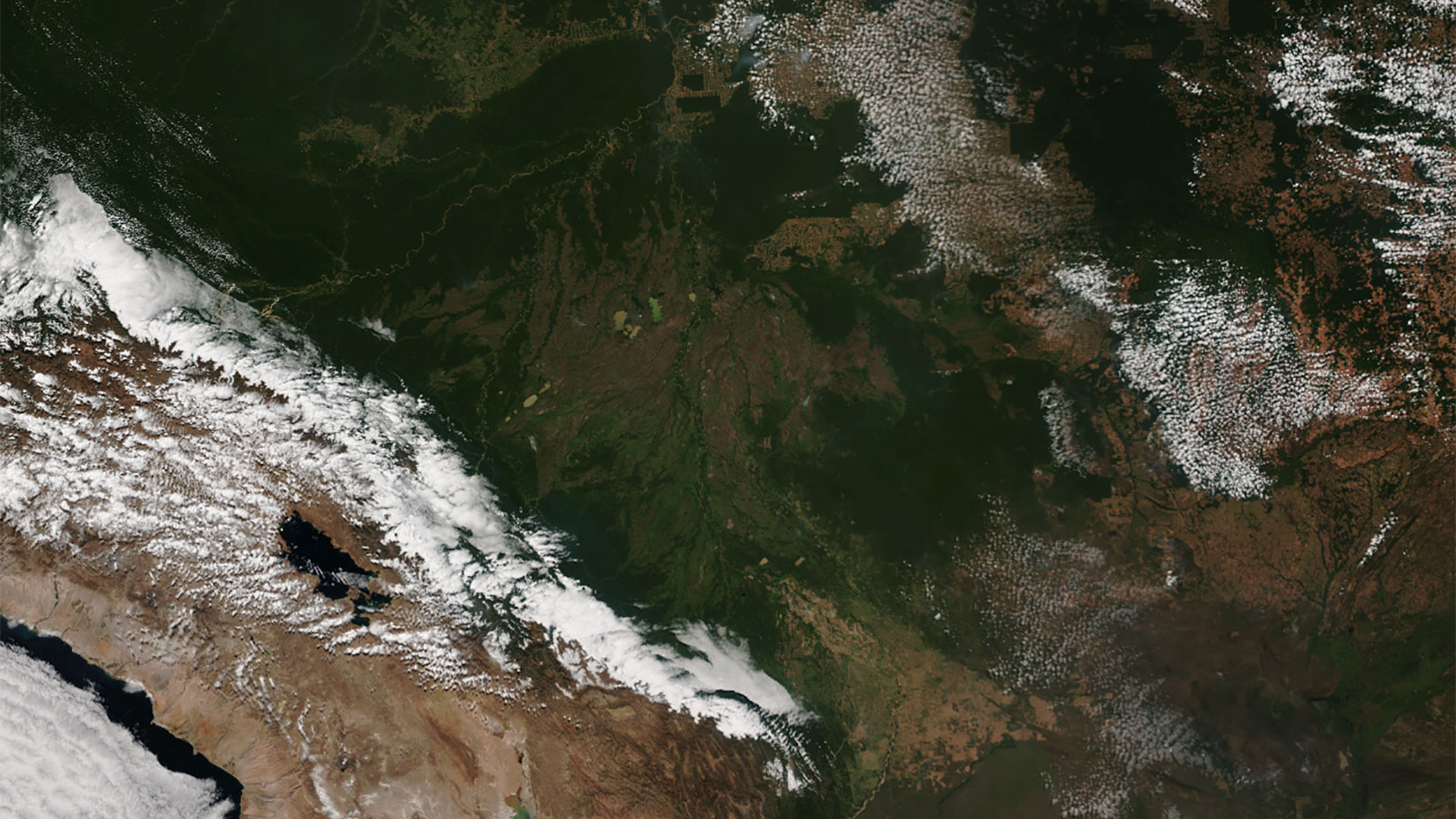 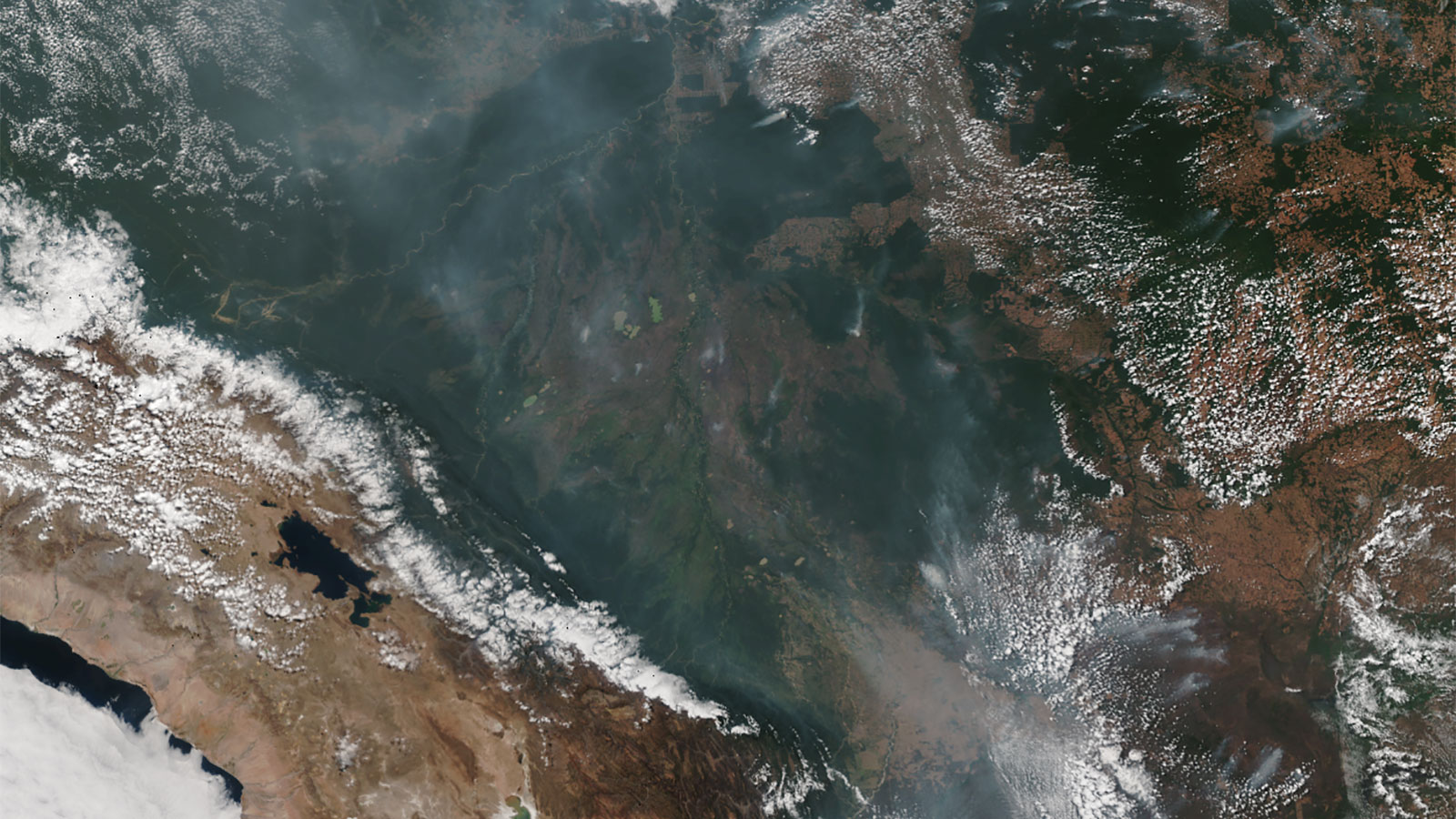 Even Sao Paulo, more than 1,700 miles away, has inhaled some of the burning forest’s smoke. Images from the city show the sky pitch-black in the middle of the afternoon, the sun partially obscured by ash and dark.

Across the globe, people are sharing images and videos that show lines of fire leaving blackened waste.

What’s the cause – How can a wet rainforest burn?

Farmers and cattle ranchers have long used fire to clear land and make it ready for use, so they are likely behind the unusually large number fires burning in the Amazon today, said Christian Poirier, the program director of non-profit organization Amazon Watch.

This year’s fires fit with an established seasonal agricultural pattern, said CNN meteorologist Haley Brink. “It’s the best time to burn because the vegetation is dry. (Farmers) wait for the dry season and they start burning and clearing the areas so that their cattle can graze. And that’s what we’re suspecting is going on down there.”

HO/AFP/AFP/Getty Images
A satellite image of smoke from several fires in the Amazon rainforest burning in two Amazonian states on Wednesday.

“The vast majority of these fires are human-lit,” said Poirier, who explained that even during dry seasons, the rainforest cannot catch fire easily, unlike, say, the dry bushlands of California or Australia.

Alberto Setzer, a senior scientist at INPE, agrees with Poirier.

Setzer believes 99% of the fires result from human actions “either on purpose or by accident.” Fires are caused by small-scale agricultural practices or mechanized and modern agribusiness projects, Setzer told CNN by email.

Is deforestation happening only in Brazil?

Deforestation is neither new nor limited to one nation.

Across the globe, cleared land is needed to expand agriculture and other activities, such as the cattle ranching, soy production and logging favored in Brazil, according to Nigel Sizer, a tropical forest ecologist and chief program officer with the Rainforest Alliance.

“It is responsible for 80% to 90% of the loss of tropical forests around the world,” Sizer said.

Already, 20% of the wider Amazon biome, including not only the rainforest but adjacent regions, has been lost to mining, logging, farming, hydropower dams and roads, according to the World Wildlife Fund.

In the Amazon, this activity can be slowed or done in a much more sustainable way, environmental groups say.

“There has been a lot of analysis and satellite data that shows there is so much land already cleared – a lot abandoned or very poorly used and managed – that we could use to grow food on,” Sizer said. “We don’t need to be clearing new forests to do this in Brazil.”

What could result from deforestation of the Amazon?

Currently, the Amazon is a “sink” for carbon dioxide (CO2), the gas that is emitted mainly from burning fossil fuels, such as coal, oil and natural gas, according to WWF. Under natural conditions, plants remove CO2 from the atmosphere and absorb it for photosynthesis, yielding carbon, which allows plants to grow, and releasing oxygen back into the air.

Scientists say that excessive carbon dioxide emissions are contributing to the warming of our planet.

The Amazon remains a net source of oxygen today – despite the fact that about 20% of the world’s total carbon dioxide emissions are caused by deforestation. Before the recent fires, the Amazon released up to 0.5 billion metric tons of carbon per year due to deforestation, according to the World Wildlife Fund.

However, increased deforestation in concert with other ecological conditions could cause the Amazon to become a source of CO2 instead of a sink, some environmentalists believe. (The amount of oxygen emitted decreasing, while carbon dioxide balloons into the atmosphere.)

Instead of preserving the planet from the effects of global warming, then, the Amazon could begin harming the planet by emitting larger amounts of carbon dioxide and contributing to climate change, according to the World Wildlife Fund. Recently, Greenpeace called Brazil’s president, Jair Bolsonaro, and his government a “threat to the climate equilibrium.”

Poirier supports this view. “The Amazon is incredibly important for our future, for our ability to stave off the worst of climate change,” he said.

Environmental groups place the blame on Bolsonaro, who they believe has endangered the Amazon by relaxing environmental controls and encouraging deforestation.

Elected in October 2018, Bolsonaro made campaign promises to restore the economy by exploring the Amazon’s economic potential. Since his election, Bolsonaro has cut the budget of the nation’s environmental enforcement agency by $23 million. After these cuts, the agency’s operations fell, according to data sent to CNN by Observatorio do Clima (Climate Observatory), a coalition of Brazilian non-government environmental organizations.

A former army captain, the conservative Bolsonaro mounted an impressive victory last year over the opposing Workers’ Party, which had governed Brazil for more than 13 years under President Luiz Inacio Lula da Silva (2003 to 2011) and his successor Dilma Rousseff (2011 to 2016).

His success is attributed to a massive political corruption scandal that not only ensnared Lula, Rousseff and other politicians but also gave rise to a prolonged recession that crippled the nation of 200 million people.

Bolsonaro recently stated an alternative explanation for the recent spate of Amazon fires.

“We took money away from the NGOs [non-governmental organizations],” he said. “They are now feeling the pinch from the lack of funding. So, maybe the NGO types are conducting these criminal acts in order to generate negative attention against me and against the Brazilian government.”

“Our house is on fire. Literally,” Macron tweeted on Thursday. He suggested the members of the G7 – Canada, France, Germany, Italy, Japan, the UK and the US – should discuss the fires during their forthcoming meeting on Saturday.

The German government backed Macron and called the fires “frightening and threatening.” Steffen Seibert, a government spokesperson, said the extent of the fires has global impacts and the German chancellor backs the French president in calling for a G7 discussion.

Bolsonaro retorted, “The suggestion of the French president that Amazonian issues be discussed in the G7 without countries in the region participating is reminiscent of a colonial mindset inappropriate in the 21st century.”

What can you do?

No need to wait around for politicians to act.

To help reforest parts of the world, you can contribute to the Rainforest Trust and Rainforest Alliance. The Arbor Day Foundation also has a program to help save tropical rain forests which provide habitat for some 50% of the world’s plants and animals.

You also can buy products that feature the “Rainforest Alliance Certified™” seal. Thousands of products from farms that met standards for sustainability have earned the seal – including coffee, chocolate and bananas.

If climate change is your worry, there’s plenty you can do about that.

HO/AFP/AFP/Getty Images
A satellite image of smoke from several fires in the Amazon rainforest burning in two Amazonian states on Wednesday.

The Amazon is burning because the world eats so much meat

Drive less, walk more. If you can afford it, “buy a more fuel efficient car,” Sizer recommends. Adjusting your thermostats by just a couple of degrees also makes a difference (while saving you money), he said.

You can also stop eating beef. Cows produce a greenhouse gas known as methane, which is 25 times more potent that carbon dioxide. Cattle is responsible for 41% of all greenhouse gas emissions produced by livestock, which in turn account for 14.5% of total global emissions.