Strippers at LA strip club want to join actors' union
Americans are proving they know how to shop their way out of a crisis
Most electric cars are quiet. But Dodge says its future electric muscle car will be super loud
Something isn't loading properly. Please check back later.

By Nathaniel Meyersohn, CNN Business
Published 11:04 AM EDT, Wed July 31, 2019
Ad Feedback
Video Ad Feedback
Retail
CLIFTON, NJ - SEPTEMBER 12: Atmosphere during the official opening of the Clifton Dollar General Store on September 12, 2009 in Clifton, New Jersey. (Photo by Brian Killian/Getty Images for Procter & Gamble)
Brian Killian/Getty Images North America
Now playing
01:34
Believe it or not, dollar stores are thriving
HALLANDALE BEACH, FLORIDA - MAY 18: People wearing protective masks walk from a Walmart store on May 18, 2021 in Hallandale Beach, Florida. Walmart announced that customers who are fully vaccinated against Covid-19 will not need to wear a mask in its stores, unless one is required by state or local laws. The announcement came after the Centers for Disease Control and Prevention said that fully vaccinated people do not need to wear a mask or stay 6 feet apart from others in most cases, whether indoors or outdoors. (Photo by Joe Raedle/Getty Images)
Joe Raedle/Getty Images
Now playing
02:13
Why Walmart is cutting prices on certain items
CNN
Now playing
02:22
Products on the shelves getting smaller? You can blame 'shrinkflation'
Formlabs
Now playing
01:35
Hasbro 3D-prints your face on its action figure toys
Adobe Stock
Now playing
03:44
Young shoppers love buy now, pay later. Here's why that might be a problem
Now playing
02:00
Meta launches online store to purchase clothes for your avatar
RICHMOND, VIRGINIA - JUNE 15: The governor of Virginia Glenn Youngkin (C) and the CEO of The Lego Group Niels B. Christiansen (R) speak during a press event where The LEGO Group is announcing to build a US $1 billion, carbon-neutral run factory in Virginia, USA. (Photo by Tasos Katopodis/Getty Images for The LEGO Group )
Tasos Katopodis/Getty Images
Now playing
02:32
Lego is building up its manufacturing footprint in the US
Lug
Now playing
04:20
The story behind the bag that sold out in 2 minutes
Now playing
02:44
Here's how much businesses are raking in from the Queen's Platinum Jubilee
EAGLE ROCK, UNITED STATES: Shoppers look for bargains at a Target store in Eagle Rock, California, 28 November, 2003, on the day after Thanksgiving, sometimes called "Black Friday" and considered to be one of the most important days of the year for retailers. AFP PHOTO/Robyn BECK (Photo credit should read ROBYN BECK/AFP via Getty Images)
ROBYN BECK/AFP/AFP via Getty Images
Now playing
01:07
Investment strategist: Retailers are talking about 'unwanted inventory levels'
crocs ceo prices inflation consumer demand mn orig_00004817.png
Now playing
01:48
Sales are up and prices too. Crocs CEO says brand was 'too cheap'
Now playing
03:48
Patek Philippe president welcomes hip-hop and NFT fanatics
Now playing
03:41
Luxury watchmakers see good times ahead as shoppers return
Now playing
02:06
Inflation is pushing up high fashion prices. Luxury buyers don't seem to mind
Meta
Now playing
00:57
Facebook's parent company has a brick and mortar store. See what's inside
Cooler Screens
Now playing
03:33
New tech in Walgreens brings mixed reactions, confusion online
New York CNN Business  —

In the spring, Dollar General (DG) debuted Believe Beauty, an exclusive, private-label line of lipsticks, eye shadows, foundations, nail polishes and skin care accessories at the chain’s more than 15,500 US stores. Dollar General (DG) partnered with a beauty manufacturer on the brand and is giving it prime real estate at stores: It’s displaying the 150-product collection in dedicated sections at the end of store aisles, making it easy for customers to find.

The aspirational brand is “an important part of our strategy,” chief executive Todd Vasos said in March.

Dollar General executives say they developed the brand to bolster the company’s hold on existing customers and improve its thin profit margins. Dollar General also hopes to draw Millennials with the brand. Millennials probably won’t post online about snacks or a new mop they bought at Dollar General, but they have showing off their new makeup online.

The line has attracted attention from personalities with large social media followings reviewing the beauty products on YouTube and Instagram.

Dollar General has rolled out Believe Beauty, a $5 and under makeup line, to draw Millennials and gain market share in the fast-growing cosmetics industry.
Dollar General

Beauty video bloggers, or vloggers, hold a lot of sway over makeup brands. Vloggers have long used YouTube and Instagram to review makeup and skincare products and to give tutorials to their followers, which for some can be up in the millions. Experts and beginners alike tune in to learn techniques, tips and to see if new products on the market are worth buying.

Dozens of Believe reviews on YouTube have already racked up hundreds of thousands of page views. One 16-minute YouTube review from a beauty vlogger has 125,000 views. Instagram is flooded with more than 3,000 posts using “#believebeauty.”

“We’re seeing really good results,” Dollar General CFO John Garratt said at a presentation in June. He pointed to “a lot of buzz on social media” about the brand. Dollar General declined to provide the brand’s sales figures for this article.

All that social media attention means free advertising for Dollar General. It boosts the company’s image with younger shoppers and is helping lift the dollar store empire.

“People like those kind of videos because it’s something different,” Taylor Horn, a blogger who reviewed Believe on her YouTube channel, told CNN Business. Her channel has more than 750,000 followers.

“It’s cool when lines like Believe Beauty launch, where it’s accessible,” she said. “I think it’s more achievable and the things that your everyday consumer can afford.” 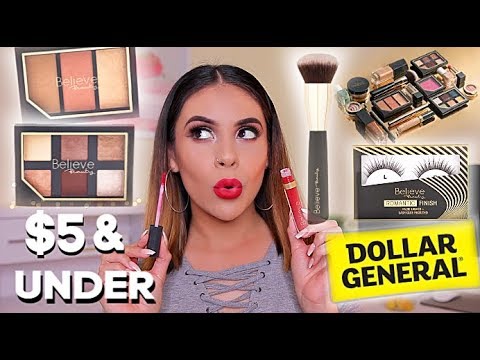 The majority of Dollar General’s stores are in rural communities, so offering the brand might save small-town shoppers a longer drive out to Target or Walgreens, she said.

Dollar General added its own beauty brand to an industry that is surging. Sales of cosmetics, which includes makeup, lipsticks, nail polish and eye shadow, have grown 31% in the United States since 2013 to more than $17 billion last year, according to Euromonitor.

But the industry is changing rapidly. Social media and the rise of vloggers have democratized the market, opening it to new shoppers.

“If you’re a beauty enthusiast in a small community, you can access the same content to inspire you as the metropolitan fashonista,” said Wissink. “Historically, you would have had to subscribe to a magazine or wait until a trend reached you.”

The skincare industry is booming, fueled by informed consumers and social media

Social media has also allowed small, low-priced brands to gain loyal followings online. Brands such as ELF cosmetics, which sells for under $10, have appealed to bargain hunters and paved the way for mainstream retailers to offer their own affordable lines.

“People know that now they can get really good makeup for cheap,” said Horn. “There’s not as much of a stigma behind it.”

Dollar General is following a similar strategy to Walgreens, Target, Zara, Forever 21 and even 7-Eleven. These companies have all added their own in-house cosmetics lines in recent years.

“The barriers to building a brand are not as stringent as they were in the past,” said Wissink from Jefferies. “That’s why you’re seeing almost every retailer launching some level of beauty.”