Super Bowl LVI was crypto's coming out party. This year, the party's over
Larry Summers: More likely the Fed can pull off a soft landing, but don't get hopes up
This Valentines' Day, propose at Cracker Barrel and you might just win free food for a year
Something isn't loading properly. Please check back later.

Mueller might have bombed his hearings, but in late night Trump was the butt of the joke

Former special counsel Robert Mueller may have struggled in the hot seat all day, but the comedic hosts of late night television kept their jokes focused on President Trump’s behavior.

NBC’s Seth Meyers expressed his thoughts on Wednesday’s testimony in a nearly 16 minute “Closer Look” segment. The “Late Night” host zeroed in on Mueller saying that he didn’t totally exonerate Trump in his report. 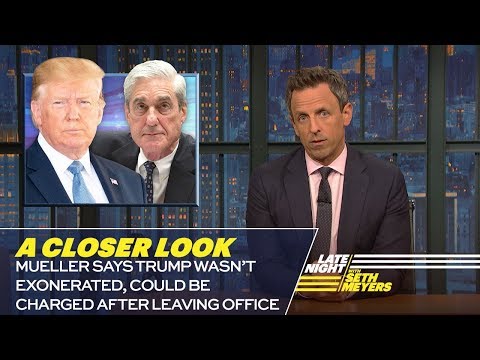 “What?! But Trump screamed tweeted ‘no collusion, no obstruction,’” Meyers said. “It was in all caps and if it’s in all caps, you know it’s true.”

The Late Show host Stephen Colbert opened his monologue on Wednesday night saying that Mueller testified for six hours in front of two different congressional committees and “that it was a marathon.”

“I know my nipples were bleeding,” Colbert joked.

Colbert also went over Mueller’s day of questioning and was perplexed by the former special counsel use of big words like “exculpated” during the testimony.

“Did your granddaughter give you a word of the day calendar? C’mon!” Colbert angrily asked the camera. “Exculpated? Just use America talk. By which I mean emojis. Orange. Handcuffs.”

The Daily Show’s Trevor Noah told his audience during his opening segment that Mueller explained that President Trump can be charged with obstruction of justice after he leaves office.

“So you know what that means? Trump is never leaving office,” Noah said. “He hears that, the Secret Service is going to be banging on the Oval Office door like, ‘Sir, you need to leave’ and he’ll be like, ‘no housekeeping. Thank you!’”

Noah explained that Democrats tried to get Mueller to give “juicy soundbites,” but he just didn’t take the bait. 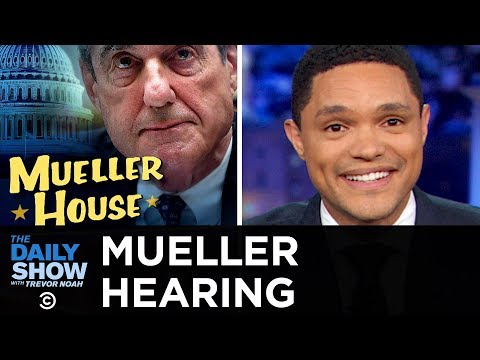 “Nice try, but Mueller isn’t playing those games. He’s like the world’s least cooperative audiobook,” the host said. “Chapter 1. You know what? You know how to read. Go get the book, read it yourself.”

Noah said that after hours of testimony, the American people didn’t really learn anything new on Wednesday.

“Poor Robert Mueller, man. The guy spent two years writing up an incredibly thorough document, and now people are badgering him with questions he’s already answered,” Noah said. “It’d be like if Jesus came back and we spent hours asking him to explain stuff that was in the bible.”

•Video
Bowen Yang's Chinese spy balloon may be the 'SNL' star's best impression yet
•Video
CNN/Getty Images
Oscar nominee on how her role was offered to Jackie Chan
•Video
Should you feel guilty about not tipping? Etiquette expert weighs in
•Video
@brittanyboyack,@wearealtervego,@jeansamantha/TikTok
Forget influencers. 'Deinfluencing' is now a thing
Ad Feedback
Ad Feedback