The moon landing got the Google Doodle treatment for its 50th anniversary, retold from launch to landing by one of the three astronauts on the history-making mission.

If you click it, you’ll see Apollo 11 command module pilot Michael Collins narrating a short cartoon rendering of the eight-day mission, peppered with anecdotes from life on board.

Neil Armstrong, Buzz Aldrin and Collins began their mission July 16, 1969, launching from Kennedy Space Center in Cape Canaveral, Florida. The tremendous undertaking took 400,000 workers to accomplish, but only three made it to space, he said in the clip. 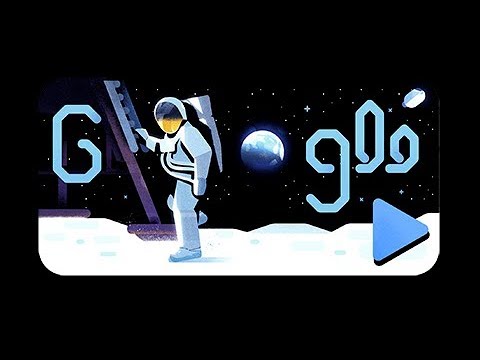 Collins remembered his first look at the moon – a “magnificent spectacle,” sure, but it couldn’t compare to the interstellar view of his home planet, now a diminutive blue speck.

On July 20, Armstrong and Aldrin departed on the lunar module, called the “Eagle,” which would separate from the command module to make the 13-minute descent to the surface of the moon. Collins stayed behind.

Their descent was a tense one, as the Eagle’s fuel ran low and lost radio contact with the team on Earth, he said in the video.

The Apollo 11 moon landing, in photos

But the two safely landed and took their first steps on the moon on July 20, 1969. Collins waited on the other side of the moon from the comfort of the command module that would take all three men home.

“Behind the moon, I was by myself but not lonesome,” he said in the clip. “If you counted, there was 3 billion plus two people on one side [of the moon] and me on the other.”

The men returned home four days later, splashing down in the Pacific Ocean. In the fall, the grounded astronauts embarked on a tour around the world, where they learned their feat didn’t just belong to Americans.

In every country he visited, Collins heard the same refrain: “We did it.”

“We, you and me, the inhabitants of this wonderful Earth – we did it.”

And 50 years later, the achievement of the Apollo 11 team still belongs to everyone. In the words immortalized on the plaque they planted on the moon: “We came in peace for all mankind.”