‘The Bachelorette’ sex argument people are talking about

By Lisa Respers France, CNN
Updated 4:34 PM EDT, Tue July 16, 2019
Ad Feedback
Video Ad Feedback
Trending Now
On ABC's "The Bachelorette," Hannah Brown sent Luke Parker packing after a heated conversation about sex, but it might not be what you're thinking.
ABC/The Bachelorette
Now playing
01:13
'The Bachelorette' doubles down on heated sex argument
NEW YORK, NEW YORK - MARCH 31: A home stands for sale in a Brooklyn neighborhood with a limited supply of single family homes on March 31, 2021 in New York City. As Americans increasingly look for larger spaces now that many are working and educating their children from home, prices of homes have risen an estimated 16% as supply can't meet demand. The number of homes for sale stands at a record low, with only a two-month supply at the current pace of sales.
Spencer Platt/Getty Images
Now playing
02:32
Typical monthly payment for US home up 42% in a year
Shutterstock
Now playing
01:57
Why privacy experts are warning against using period-tracking apps
Now playing
01:20
'Somebody should have slapped him': Texas A&M coach slams Nick Saban
KCNC
Now playing
01:42
Paralyzed man uses microchip implanted in brain to drive race car
Getty Images
Now playing
01:11
Watch Tiger Woods react to Phil Mickelson missing PGA Tour
Now playing
01:08
She was lost in the woods until this furry hero saved her
TOPSHOT - The blood moon is seen during a total lunar eclipse in Rio de Janeiro on May 16, 2022. (Photo by CARL DE SOUZA / AFP) (Photo by CARL DE SOUZA/AFP via Getty Images)
CARL DE SOUZA/AFP via Getty Images
Now playing
01:06
Watch: Total lunar eclipse creates 'blood moon'
Twitter/@Pearl_Jam_Fam
Now playing
01:04
Watch 18-year-old sit in for Pearl Jam drummer
@prideofgypsies
Now playing
01:00
Jason Momoa's fans are upset. Here's why
An alligator was relocated after showing up outside a South Carolina school.
City of Charleston Police Department
Now playing
00:52
Police take on alligator outside elementary school
NBC
Now playing
01:20
Selena Gomez looks for love on 'SNL'
San Diego Zoo Wildlife Alliance
Now playing
00:59
Baby giraffe with life threatening disorder saved by leg braces
WBNS/Franklin County Convention Facilities Authority
Now playing
01:04
Video: Tesla jumps curb and crashes into convention center
This is the first image of Sgr A*, the supermassive black hole at the centre of our galaxy, with an added black background to fit wider screens. It's the first direct visual evidence of the presence of this black hole. It was captured by the Event Horizon Telescope (EHT), an array which linked together eight existing radio observatories across the planet to form a single "Earth-sized" virtual telescope. The telescope is named after the event horizon, the boundary of the black hole beyond which no light can escape.   Although we cannot see the event horizon itself, because it cannot emit light, glowing gas orbiting around the black hole reveals a telltale signature: a dark central region (called a shadow) surrounded by a bright ring-like structure. The new view captures light bent by the powerful gravity of the black hole, which is four million times more massive than our Sun. The image of the Sgr A* black hole is an average of the different images the EHT Collaboration has extracted from its 2017 observations.  In addition to other facilities, the EHT network of radio observatories that made this image possible includes the Atacama Large Millimeter/submillimeter Array (ALMA) and the Atacama Pathfinder EXperiment (APEX) in the Atacama Desert in Chile, co-owned and co-operated by ESO is a partner on behalf of its member states in Europe.
European Southern Observatory/EHT Collaboration
Now playing
03:45
First image of Milky Way's supermassive black hole revealed
Now playing
01:25
'Get the f**k out!': Broadway legend Patti LuPone screams at audience members not properly wearing their masks

“The Bachelorette” Hannah Brown sent a contestant home Monday night after he pressured her about sex.

But not in the way you think.

Brown, 24, gave Luke P., 24, the boot after they got into a heated conversation in Greece during Fantasy Suite week.

For the uninitiated, the Fantasy Suite is a big deal on “The Bachelor” and “The Bachelorette” because it gives the individual couples an opportunity to spend some overnight time together.

We’ll just leave it at that.

Anyway, Brown is a native of Alabama and a former beauty queen who felt a connection with Luke P., who is from Georgia.

She also established something with some of the other men vying for her heart and therein was the problem between her and Luke P., who has been divisive in the house of men competing for a final rose from Brown.

So much so that he has widely been viewed as this season’s villain.

Monday night was satisfying to those who wanted to see Luke P. finally get shown the door.

It all started when he told Brown that while he’s not a virgin, he’s been abstinent for the past four years because of his religious beliefs and he wanted the same for her.

Saying he was “very confident that were on the same page with our morals and I just want to hear it from your mouth,” Luke P. wanted assurances that there would be no hanky panky between her and the three other men left in the competition.

“Like, I totally have all the trust in the world for you but at the same time I just want to make sure we’re on the same page,” he said. “Like, if you told me you’re going to have sex or you had sex with one or multiple of these guys I would be wanting to go home 100 percent.”

Brown didn’t love the way the conversation was going.

“It’s just that you’re questioning me and you’re judging me and feel like you have the right to when you don’t at this point,” she said. “And I get when you care for somebody that you don’t want to think about somebody being intimate with another person. But guess what, sex might be a sin out of marriage, pride is a sin, too, and I feel like this is a pride thing.”

Brown eventually asked Luke P. to leave, but he wouldn’t move, telling her, “I feel like you owe me at least a minute to share my heart.” 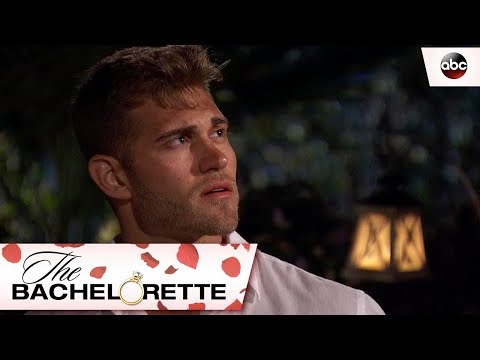 Brown finally got him out of there after she told him she had had sex, “And Jesus still loves me.”

K reflections from last nights bachelorette- I truly believe the lord wanted Luke to stay in the show until fantasy suites so @AlabamaHannah could do that speech. Younger girls needed to hear that message- and see her strength of standing up to an awful dude like that.

This is @AlabamaHannah trying to get rid of Luke. #bachelorette pic.twitter.com/YV8nSlKDrk

i haven’t seen not one episode of the bachelorette but i see all this twitter drama and im loving this. never seen it but y’all talking so much i don’t like Luke either damn.

good morning to everyone except luke p #bachelorette

“I truly believe the lord wanted Luke to stay in the show until fantasy suites so @AlabamaHannah could do that speech,” one person tweeted. “Younger girls needed to hear that message - and see her strength of standing up to an awful dude like that.”

For his part, Luke P. took to social media to share his side of the story.

“In our conversation my heart was never to judge or condemn Hannah,” he wrote in the caption of a photo of him and Brown he posted on Instagram. “I was simply making a decision for myself on what I expected in our relationship, our conversations and our beliefs led me to believe we were on the same page about sex.

“For me it was never about getting a rose, it was always about finding a wife who would choose me everyday just as I would choose her everyday,” he added.

@AlabamaHannah The difference in how we view sin is seen in the response, I’m weeping at mine and you’re laughing at yours. All sin stings. My heart hurts for both of us.

He also hopped on Twitter and engaged with Brown, writing “The difference in how we view sin is seen in the response, I’m weeping at mine and you’re laughing at yours. All sin stings. My heart hurts for both of us.”

Brown got off a zinger, reminding Luke P. of some of his past behavior.

i have never said that i find my sin funny. i’m not going to lectured on appropriate emotional responses by a guy who threw deli meat in a guys lap. https://t.co/hc8lsPUUA8

“I have never said that i find my sin funny,” she tweeted. “I’m not going to be lectured on appropriate emotional responses by a guy who threw deli meat in a guys lap.”