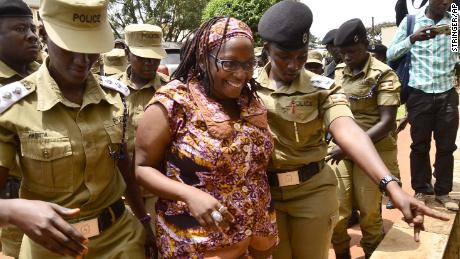 In a photograph taken on Monday April 13, 2017, Makerere University researcher Dr Stella Nyanzi, left, is led by police to Buganda Road Court in the capital Kampala, Uganda. A Ugandan court has released Nyanzi on bail after being jailed for more than a month for calling the president "a pair of buttocks", charged with offensive communication and cyber harassment because of her Facebook posts targeting the country's long-time president, Yoweri Museveni, and his wife Janet, who is education minister.(AP Photo)

She wrote a poem about a vagina. It landed her in jail

By Alice McCool, for CNN