This Honda lawnmower is the fastest in the world, hitting 100 mph in 6 seconds

In addition to its speed, to earn the title the lawnmower still needed to look like one and, of course, be used to mow a lawn. 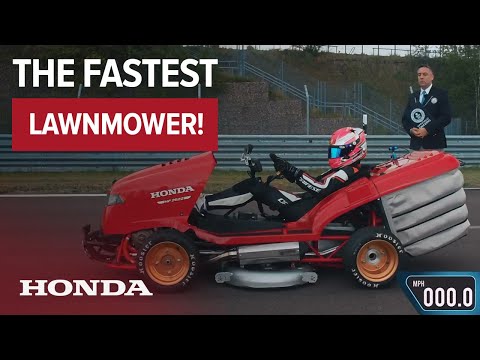 British stunt driver Jessica Hawkins completed two runs, racing the mower in opposite directions within an hour, at a top speed of 110.5 mph at a German racetrack. Her acceleration from zero to 100 mph averaged just 6.29 seconds.

The mower is outfitted with the same four-cylinder, 200-horsepower engine as Honda’s Fireblade “superbike,” hidden in the body of a tractor. It achieves a top speed of 150 mph, while the company’s top-rated standard lawnmowers top out at 4 mph.

The first Honda Mean Mower held the fastest lawnmower title in 2014, with a top speed of 116 mph, but was dethroned in 2015 by a Norwegian man who built and raced his own vehicle at 133 mph.