Here’s why Donald Trump needs to expand the 2020 map

President Donald Trump’s 2020 campaign team is exploring their chances of expanding the electoral map into five states he lost in 2016, a move driven as much by necessity as by early aggressiveness.

CNN’s Dana Bash got her hands on a memo from Trump pollster Tony Fabrizio in which he suggests that opportunity for Trump may exist in Minnesota, New Mexico, New Hampshire, Nevada and Oregon in 2020. Trump lost all five in 2016 but only two – New Hampshire and Nevada – were considered swing states. None have voted for a Republican presidential candidate since 2004 – while in Oregon (1984) and Minnesota (1972), it’s been a lot longer than that.

In each of the states, you can hand-pick a result here or there that might look encouraging for Trump. In Oregon, for example, former NBA player Chris Dudley, a Republican, came within a point of winning the governorship in 2010. In Minnesota, Trump lost to Hillary Clinton by 1.5 points – and the state has been slowly trending Republicans’ way of late. New Mexico and Nevada voted for George W. Bush in 2004.

In short: You can see the logic here. Especially when you consider the way the Trump campaign is painting these first feints at expanding the map: We are flush with cash, so why not consider building organizations in these states in the event we catch lightning in a bottle like we did in Michigan and Pennsylvania in 2016?

Which is, as far as it goes, true. At the end of March, Trump’s re-election campaign had already raised $97 million and had a whopping $41 million in the bank. (Trump, unlike past presidents, began raising money for his re-election race shortly after first winning the White House in 2016.) What that sort of early fundraising means is that unlike his first race, in which he was heavily outspent by Clinton in almost every swing state, Trump will have the money to build top-tier organizations in every swing state and maybe even a few non-traditional swing states. 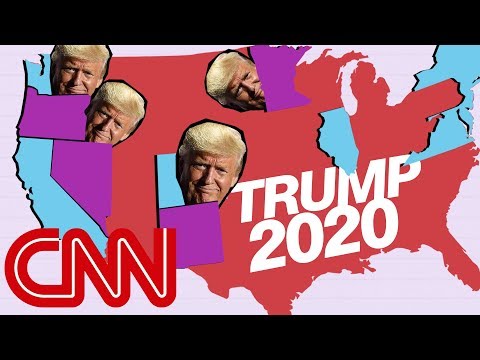 But don’t let the Trump campaign’s spin fool you. This effort to stretch the 2020 map isn’t solely about a cash-flush campaign looking for places to spend money in search of opportunities. It’s a fundamentally defensive move, caused by the ahistorical Trump victories in typically Democratic states like Pennsylvania and Michigan combined with the incumbent’s faltering numbers in those same states.

Trump was the first Republican to win Michigan and Pennsylvania at the presidential level since George H.W. Bush in 1988. And that wasn’t for a lack of trying by Republican presidential candidates who regularly targeted both states – but especially Pennsylvania – in each of the subsequent elections.

Polling in both states also suggest that the tide has turned against Trump. In Gallup’s 2018 state-by-state polling, just 42% of residents in Michigan and Pennsylvania approved of the job Trump is doing while 54% in both states disapproved. While that’s not totally determinative of Trump’s chances of winning either state next November, it is the sort of thing that has to worry Trump’s top strategists.

Which is why chatter has picked up – even 17 months before the election – about other places Trump could go to get to 270 electoral votes and a second term.

Let’s do some math. Trump won in 2016 with 306 electoral votes. If he loses Pennsylvania (20 electoral votes) and Michigan (16) and the rest of the map stays the same as it was in 2016, Trump is at 270 electoral votes. He gets re-elected. But with ZERO margin for error – meaning he has to win in Wisconsin and Florida, among other very closely contested states in 2016.

Which is where these five expand-the-map states come in. Combined, the five states only had 32 electoral votes in 2016 (Minnesota had the most at 10). Which isn’t a ton! But when you consider the very real possibility that Trump could be down to 270 electoral votes in his best-case (or close to it) 2020 map, you see why five electoral votes here (Nevada had six, New Mexico had five) or even four (New Hampshire) can come to really matter.

Of course, all of this may wind up being a giant head fake by the Trump campaign. An attempt to make Democrats believe that Trump is committed to pressing his financial edge – and to recalculate their own general election strategy. Could be!

But the reality is that Michigan and Pennsylvania are going to be VERY hard holds for Trump – as they would be for any Republican president. And without those two states, the path to 270 gets very narrow unless Republicans can put other states into the competitive category.