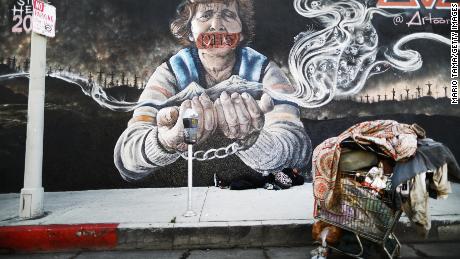 A man lies on a sidewalk in Los Angleles County, where the number of homeless people leaped by 59,000 over the past year.

(CNN)This week, Los Angeles County officials were stunned to learn the area's homeless population soared by almost 60,000 in the past year.

But statewide, California actually had the biggest overall decrease in the number of homeless people of any state from 2017 to 2018.
A suburbia for the homeless -- where they can live forever
It's difficult to compare how cities nationwide rank in homelessness because some cities use very different methods for counting or reporting.
And while the US Department of Housing and Urban Development publishes statistics on homelessness, some experts say the data might drastically undercount its true scope.
But HUD's most recent Annual Homeless Assessment Report to Congress gives a glimpse into which states have seen the most drastic changes in the number of homeless people between 2017 and 2018:
<div class="read-more-l