That piece included these lines:

“In the three weeks since Mr. Biden announced his candidacy, Mr. Trump has tried out two nicknames on him, accused his opponent and family members of corrupt dealings with Ukraine (prompting a coordinated Democratic response) and argued that he’s naïve about the threats America faces…

“…Mr. Trump’s attacks on Mr. Biden have defied the pleadings of his own aides, who think almost any other candidate would be easier to defeat, and left Republicans puzzled while delighting Biden supporters.”

So what has Trump done in the intervening weeks? I’ll give you one good guess!

“Super Predator was the term associated with the 1994 Crime Bill that Sleepy Joe Biden was so heavily involved in passing,” Trump tweeted Sunday. “That was a dark period in American History, but has Sleepy Joe apologized? No!”

“North Korea fired off some small weapons, which disturbed some of my people, and others, but not me,” Trump tweeted Saturday. “I have confidence that Chairman Kim will keep his promise to me, & also smiled when he called Swampman Joe Biden a low IQ individual, & worse. Perhaps that’s sending me a signal?”

Did I mention that Trump spent the entire Memorial Day weekend halfway across the world on a state visit in Japan? Totally normal stuff!

Trump defended his overseas tweets with another tweet Tuesday: “I was actually sticking up for Sleepy Joe Biden while on foreign soil. Kim Jong Un called him a ‘low IQ idiot,’ and many other things, whereas I related the quote of Chairman Kim as a much softer ‘low IQ individual.”’ Who could possibly be upset with that?”

Since Biden formally entered the race in late April, Trump has sent at least a dozen tweets referencing (or attacking) Biden in some way, shape or form while retweeting dozens of critiques of the former vice president – and the decision of the International Association of Fire Fighters to endorse his candidacy. Over that same time, he has barely mentioned any of the other 22(!) competitors for the Democratic presidential nomination – except to dismiss them as fading since Biden entered the race.

“Looks like Bernie Sanders is history,” Trump tweeted on May 20. “Sleepy Joe Biden is pulling ahead and think about it, I’m only here because of Sleepy Joe and the man who took him off the 1% trash heap, President O! China wants Sleepy Joe BADLY!” 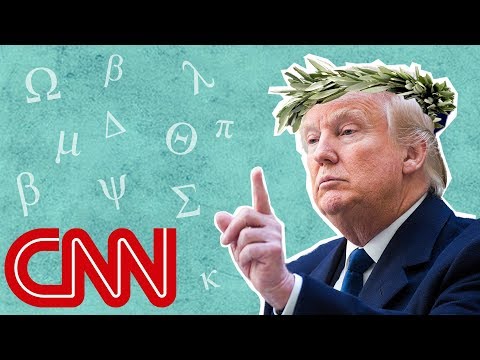 Trump’s focus – bordering on obsession – with Biden has several practical effects on the 2020 race.

The most obvious is that it makes Biden’s case for him among Democrats – that Trump knows the former VP represents a real threat to him and all of his tweets are simply a reflection of the incumbent’s nervousness.

Much of Biden’s appeal to Democrats is premised on the idea that he gives the party the best chance to beat Trump – particularly in the industrial Midwest, where the President bested Hillary Clinton in 2016. The more Trump attacks Biden – and ignores all of the other candidates – the easier that case is to make.

For everyone not named “Joe Biden” running for the Democratic nomination, this is a major problem. Trump’s tweets drive news cycles. And if he keeps tweeting about Biden, it becomes that much harder to build a case that electability is a chimera and that there are lots of as-good-if-not-better options to Biden in the Democratic field. If you are, say Minnesota Sen. Amy Klobuchar, you can make that argument until the cows come home in Iowa but if Trump tweets about Biden, it will overwhelm your message 10 times out of 10.

And that’s a real problem given that Biden has a clear lead in national polling and is also in strong position in the early states of Iowa, New Hampshire and South Carolina as well. If the race stays, basically, as it is, Biden wins. The more Trump singles out the former VP, the more likely that scenario becomes.

Which brings me to the second major impact of Trump’s laser-like focus on Biden: He is elevating the former VP to his level and effectively starting the general election right now.

Conventional wisdom for presidents seeking a second term is to wait as long as possible to look like a candidate, which means – among other things – totally ignoring the race going on in the other party for the chance to take you on. The thinking behind that theory is that the White House and the broader powers of the presidency are hugely impactful – and only one person has the ability to use them. So, be president for as long as you can. Only be a candidate – like all the other people running – when you have to.

Trump, of course, has not followed that line of thinking. He established his reelection campaign the day he was sworn in as President and has openly talked about now just the campaign but even the campaign’s slogan (“Keep America Great”) for months and months now. So attacking Biden – and thereby elevating him to your level – is right out of Trump’s unconventional playbook. And maybe it will work! But if past is prologue – and it might not be! – it’s not a smart strategy.

What’s clear is that Biden is a clear benefactor in all of this. And he is doing everything he can to keep the idea that this race is already Trump vs. Biden going.

“Everybody knows who Donald Trump is, we have to let them know who we are,” Biden tweeted, along with a snippet of his stump speech, on Saturday. “We choose hope over fear. Truth over lies. And unity over division.”

And Biden’s deputy campaign manager Kate Bedingfield responded to Trump’s tweets with a statement Tuesday: “The President’s comments are beneath the dignity of the office. To be on foreign soil, on Memorial Day, and to side repeatedly with a murderous dictator against a fellow American and former vice president speaks for itself.”