Sen. Chuck Grassley faced vocal criticism at a recent town hall in Iowa over his past votes to repeal the Affordable Care Act.

In a video of the exchange posted by the progressive advocacy group Progress Iowa, a woman approaches Grassley about the landmark health care legislation and the Iowa Republican insists that – despite past efforts to repeal it – the law popularly known as Obamacare would likely not face repeal and predicted ongoing support for its protections for people with pre-existing conditions.

Iowan to Grassley: You're Threatening My Life 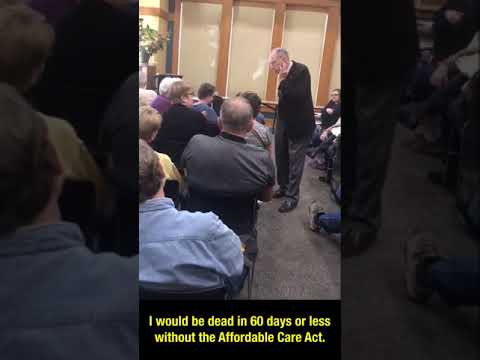 Matt Sinovic, executive director of Progress Iowa, identified the woman in the video as Robin Stone, a resident of Iowa. She is a volunteer who Progress Iowa had worked with in the past, Sinovic told CNN. Additionally, the Iowa Democratic Party listed Stone as the chair of the Delaware County Democratic Party.

“What is your plan to keep millions of Americans, like myself, covered – those of us with pre-existing conditions, people who are on their parents’ insurance and, again, people like myself who need life-guaranteeing medication?” Stone said. “We could lose our insurance, and I’d be probably be dead in two months.”

Grassley began by explaining the question was relevant because of an ongoing lawsuit that could lead to Obamacare being declared unconstitutional, but the longtime GOP senator added, “I don’t think that the courts are going to declare it unconstitutional.”

“Yes,” Grassley responded. “First of all, it’s not going to get repealed.”

Stone followed up and noted her dependence on insurance and the law’s protections for those with pre-existing conditions.

“There’s no question about keeping pre-existing conditions,” Grassley said, adding that “the Affordable Care Act is the law of the land, and it’s not going to be repealed by Congress. Do you think it’s going to be repealed tomorrow? … The last time we voted for repeal was when (late Arizona GOP Sen. John) McCain voted the other way, and there’s no chance of repealing it now. Besides, if we passed it in the Senate, we couldn’t get it through the United States House of Representatives. So what are you worried about?”

Stone told local outlet KGAN later that Grassley had “evaded” her question and that she planned to follow up with him for the possibility of a private sit-down so he could address her concerns.

Michael Zona, a spokesperson for Grassley, told CNN in an email that the senator’s staff had provided Stone with contact information for his scheduling department and his office had not been contacted yet.

“Sen. Grassley sets aside at least eight 15-minute meetings each day to meet in-person or by phone with Iowans on a first-come-first-served basis to discuss policy issues,” Zona said. “He also makes himself available for at least one Q&A in every county, every year as part of his annual 99 county meetings.”

As Grassley noted, Obamacare repeal would face an arduous if not insurmountable path forward in the current Congress. President Donald Trump has called for the GOP to renew its efforts on health care, but Senate Republicans have shown little appetite for tackling new legislation. The Democrats who control the House, meanwhile, have railed against Republicans on the issue, especially on the lawsuit Grassley referred to, making it a centerpiece of their 2020 message.

The Trump administration moved in March to support the lawsuit seeking the full repeal of the law, which Grassley said in the video clip he did not expect to succeed. Should the latest legal attempt to take down the law succeed, however, Obamacare’s protections for people with pre-existing conditions would require congressional action to be reinstated.