Pudgy parrots, sleepy sloths and one of the best stories we’ve seen all year

Magic is real. How else do you explain the glimmering northern lights, the phosphorescent glow of the mysterious sea creatures of the deep? What, short of true sorcery, could account for the ancient majesty of a rainforest or those really weird dances birds do when they want to attract a mate? OK, yes, most of it is science, but science is just another word for magic we can explain. Earth Day is April 22, and there’s no better way to celebrate than to embrace the rich menagerie of magical matter all around us. You can start with this week’s Good Stuff, where you’ll discover flirty birds, sleepy sloths, hidden flowers, jellyfish, national parks and, of course, plenty of good people who make the world a little bit better just by being in it.

Want more inspiring, positive news? Sign up for The Good Stuff, a newsletter for the good in life. It will brighten your inbox every Saturday morning.

We can’t get enough of these fuzzy green nuggets! These are baby kākāpōs, the fattest parrots in the world. They’re native to New Zealand and up until recently there were only 147 of them in existence. It turns out, when you only mate once every couple of years and constantly face predators and environmental threats, building a big family is a bit of a challenge. However, this year, the kākāpōs had a record-setting mating season! At least 75 hatched chicks are now thriving, thanks in no small part to a diligent nationwide conservation effort. This single bumper crop of kākāpōs could mean an even bigger comeback a few years down the road, so you can bet New Zealand researchers are thrilled. Why wouldn’t they be? These little land angels should be protected at all costs.

It’s hard to put Valentino Dixon’s s incredible journey into just a few lines, but we’ll try: In 1991, Dixon was put in prison for a murder he didn’t commit, and to cope, he took up drawing. He got so good that the warden of his prison asked him to draw the 12th hole of the Augusta National golf course, where the Masters is held. The result was stunning, and Dixon kept drawing golf course scenes. In September 2018, thanks to the efforts of his daughter, some law students and the editorial director of Golf Digest, Dixon was finally exonerated. Earlier this month, Dixon attended the Masters and met Tiger Woods, Jack Nicklaus and other golfing greats, and even presented Nicklaus with a drawing of the 13th hole he completed in prison. Yeah, this little paragraph doesn’t cut it. This is one of the best stories we’ve seen all year – and you KNOW that’s saying something. Do yourself a favor and read the whole thing.

If you’re still in mourning about the tragic Notre Dame fire, here is a little piece of hopeful news: The bees survived! Yes, since 2013, about 180,000 bees have lived in three hives on the roof of the cathedral just below its iconic rose window. The hives are supported with wood, so there was concern they could have caught on fire – not to mention that at high temperatures, the wax in the hives could have melted and killed the bees. Luckily, the hives were fine, and since bees don’t have lungs (fun fact!) there’s no worry that they were exposed to smoke-related dangers. Notre Dame beekeeper Nicolas Geant said it was a “huge relief” and a “miracle” to discover the bees were alive. “I was incredibly sad about Notre Dame,” he said. “But to hear there is life when it comes to the bees, that’s just wonderful. I was overjoyed.”

Fred Lawrence, a 98-year-old World War II veteran who still exercises at his local 24 Hour Fitness three times a week without fail (there he is on the right, keeping pace with one of his workout buddies). He’s the oldest member of the gym, so on his 98th birthday, the staff threw him a party complete with decorations, a giant card and some vanilla bean cupcakes – Lawrence’s favorite. After the celebration, Lawrence thanked everyone and then proceeded to crush his customary 90-minute workout. What, you think getting to 98 is easy?!

How do you explore the rich flora and fauna that grows in remote, hard-to-reach places such as Hawaii’s steep cliff sides and small islands? By drone, of course! Researchers sent a drone into an inaccessible part of Kauai’s Kalalau Valley and ended up finding a rare type of flowering plant that was previously thought to be extinct. The little yellow flower, a relative of hibiscus, was growing on a treacherous vertical cliff, so humans probably never could have found it on their own. Scientists hope drone projects like this will continue to produce enticing glimpses into nature’s most confounding nooks and crannies.

Go ahead, take a guess. Is this a tiny underwater weather balloon? A crab parasailing on the ocean floor? It’s actually a new type of jellyfish that was recently discovered in the deepest parts of the Indian Ocean. The researchers who discovered it described it as an “extraordinary gelatinous animal” that “does not resemble anything seen before.” Which is high praise for a jellyfish, but a withering insult for literally anyone else.

We already know Costa Rica is a beautiful, verdant paradise, but did you know it also has sloths? Lots of them! The Sloth Sanctuary outside of Cahuita, Costa Rica, is home to 214 sloths of all ages and levels of laziness, which means it’s basically heaven for animal lovers. The folks at CNN Travel got to check it out firsthand, and we are not seething with jealousy at all of the cute sloth photos. Not at ALL.

Tell us something good

Job interviews are stressful. Getting pulled over is stressful. Getting pulled over on your way to a job interview? Nightmare. When Cahokia Police Officer Roger Gemoules pulled over 22-year-old Ka’Shawn Baldwin while Baldwin was on his way to a job interview, Gemoules could see how much it meant to the young man to be on time for the big appointment. So instead of giving him a ticket, Gemoules gave him a ride. Hey, laws are laws for a reason. But sometimes, they need to be paired with a little compassion. (PS: Baldwin got the job!)

Today marks the start of National Park Week, so get outside and support your local wonders! The National Park Service is also offering free Earth Day admission to any parks that charge a fee. This is just for U.S. National Parks, but for our Canadian friends, here’s another cool Earth Day opportunity: Parks Canada is looking for input on how to manage their stunning lineup of mountain parks. So if you’re a fan of Banff, Mount Revelstoke, Glacier, Jasper, Yoho, Kootenay or Waterton Lakes, now’s your chance to have a say in their future. 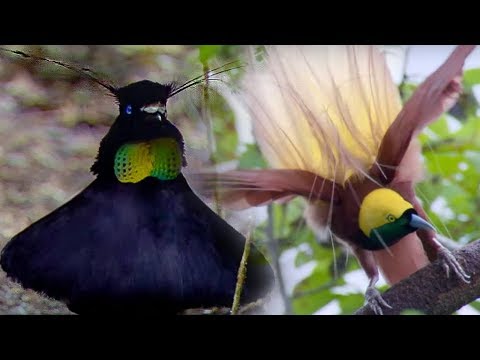 I can’t talk about natural wonders for this long without mentioning this iconic Planet Earth clip. Sure, nature’s beautiful, but sometimes it’s also awkward and jittery and romantically frustrated and terrible at impressing potential mates. Who among us doesn’t know the feeling? (Click to view)