Kanye’s Sunday Service is coming to Coachella, but what is it?

Rapper/producer/entrepreneur and all around provocateur Kanye West is bringing his Sunday Service to the Coachella Valley Music and Arts Festival on Easter.

“Sunday Service on Easter Sunday at 9am at the mountain in Camping,” the festival tweeted Thursday from its official account. “Shuttles, parking lots & doors open 6am.”

Sunday Service on Easter Sunday at 9am at the mountain in Camping. Shuttles, parking lots & doors open 6am – https://t.co/wwrc0XJJoU pic.twitter.com/gSi6yFZJd0 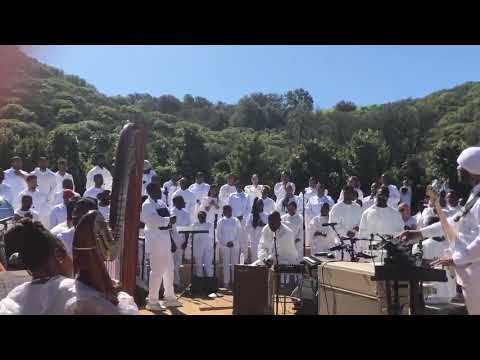 But what is it exactly?

Followers of his wife, Kim Kardashian West, are pretty familiar with it, as she frequently posts videos showing her husband and a choir, dressed all in white on a hillside, jamming his tunes and spiritual songs.

Artists including Kid Cudi and Kaye Fox have performed.

The weekly services are invitation-only, and celebs including Katy Perry, Orlando Bloom, Courtney Love and rapper DMX have reportedly made the scene.

“It’s honestly more like a healing experience for my husband,” Kardashian West told Elle. “It’s just music; there’s no sermon. It’s definitely something he believes in — Jesus — and there’s a Christian vibe. But there’s no preaching. It’s just a very spiritual Christian experience.”

She said it’s open to all faiths.

“Everyone that comes understands it’s just a really healing experience with an amazing choir, and amazing messages about love to start off your week,” the reality TV star said.

Fans first learned of Sunday Service after Kardashian West tweeted about it in January.

Our new Sunday Service is starting. Check out the rehearsals on my Instagram stories ✨

“Our new Sunday Service is starting,” she wrote. “Check out the rehearsals on my Instagram stories.”

In a clip shared on social media, Grammy-winning vocalist Tony Williams said the purpose of the services was “to be able to communicate the message of love effectively.”

There are plenty of videos online that share what happens at the services.

I forgot to upload Sunday Service Videos this week. So here’s one that I love. I just don’t know what’s gonna happen at Coachella pic.twitter.com/ebY8gJdkgQ

As for how everything will go down with Coachella, even Kardashian West tweeted Thursday that she doesn’t know what is going to happen.

She told Elle many people have questions she can’t answer.

“Everyone’s asking, even my mom,” Kardashian West said. “She asked, ‘How many people can I bring?’ I was like, ‘Mom, I don’t know the set-up; I don’t even know where it’s going to be. I’ve never even been to Coachella — I have no idea.’ ”