A catastrophic fire engulfed Notre Dame Cathedral in Paris on Monday, altering the city’s skyline and threatening a potent symbol of Catholicism at the start of Holy Week.

A pair of bell towers immortalized in Victor Hugo’s tale “The Hunchback of Notre Dame” survived, along with the cathedral’s elaborate stonework facade. Officials said invaluable artifacts were saved, including the Crown of Thorns, believed to be a relic of the passion of Christ.

President Emmanuel Macron lamented the destruction of an awe-inspiring building that embodied the heart of Paris for more than 800 years. But he pledged to rebuild, starting with the launch of an international fundraising campaign.

“Notre Dame is our history, it’s our literature, it’s our imagery. It’s the place where we live our greatest moments, from wars to pandemics to liberations,” he said.

“This history is ours. And it burns. It burns and I know the sadness so many of our fellow French feel.”

At least one firefighter injured

The Paris prosecutor opened an investigation into the fire, the cause of which is still unknown.

The initial call to emergency services notified authorities of a fire in the attic of the cathedral, Paris Fire Brigade Commander General Jean-Claude Gallet said. The site was undergoing renovations and was surrounded by scaffolding.

Hundreds of firefighters were deployed to the scene, snarled by rush hour traffic.

For much of the afternoon, flames and plumes of smoke billowed from the cathedral as firefighters in cranes sprayed water onto the structure.

The fire, just days before Easter, was met with horror by Parisians and tourists.

As firefighters battled the blaze, Parisians gathered outside the church Monday night, raising their voices in prayer. 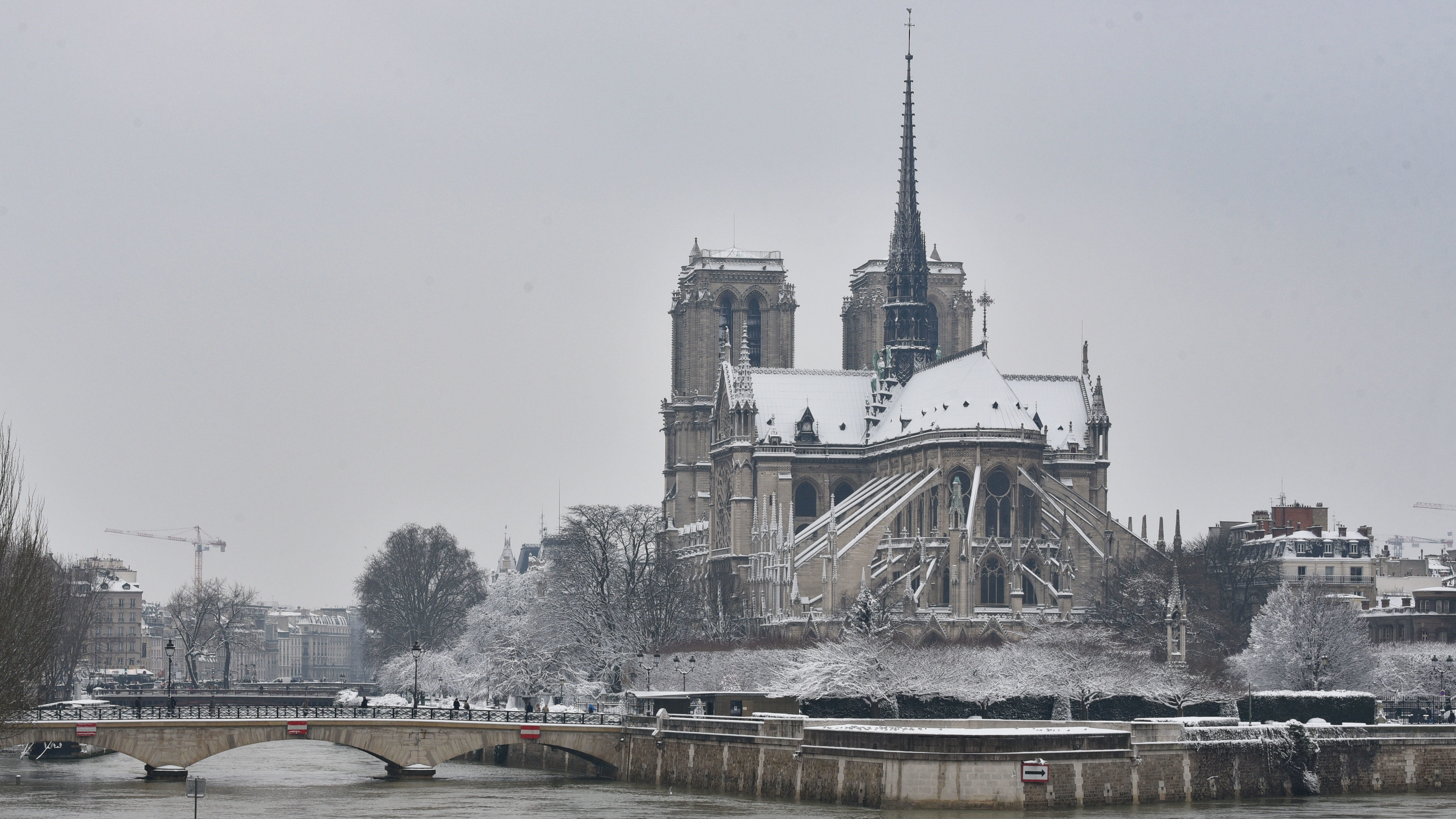 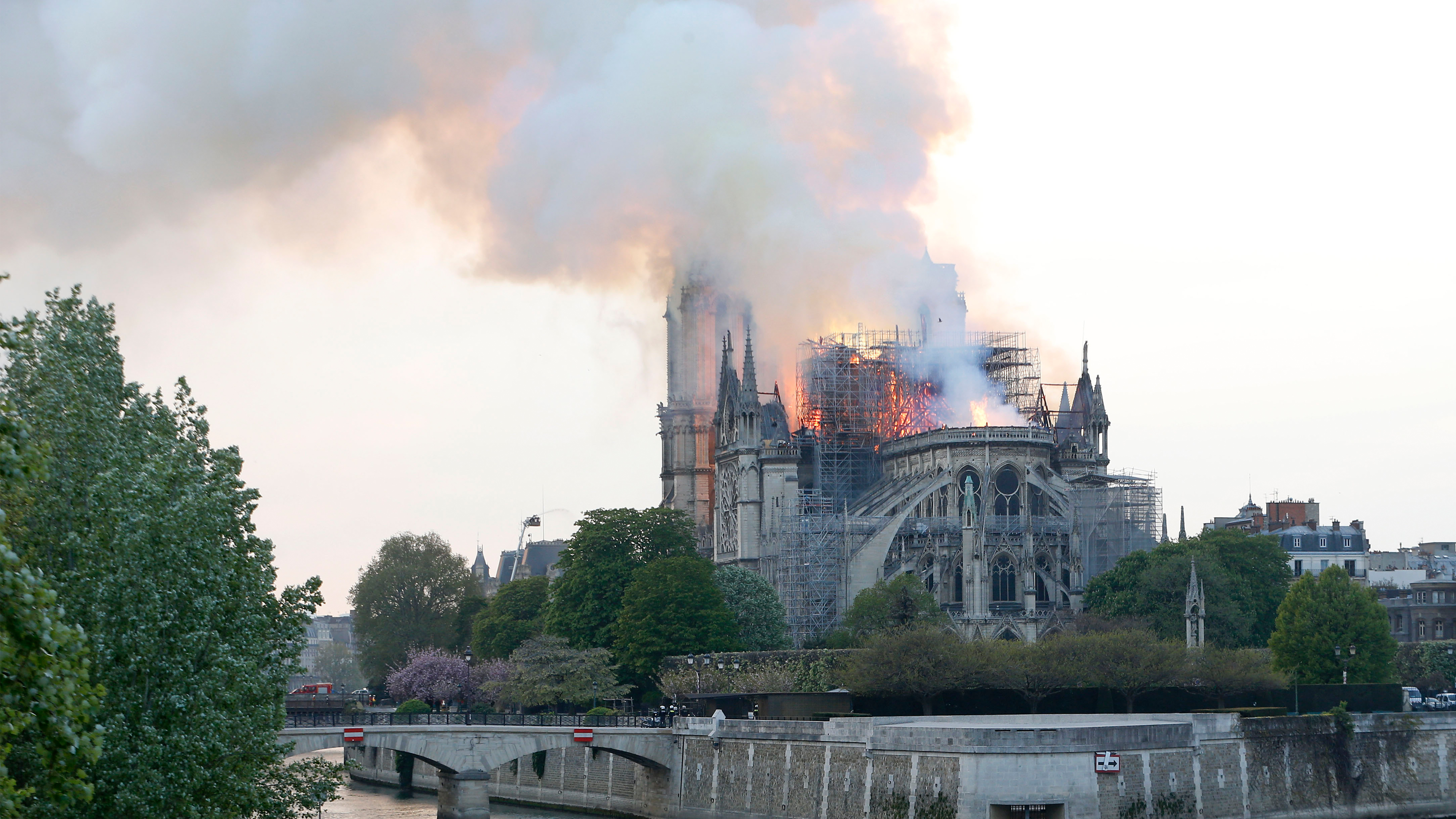 Thibaud Binétruy, who lives in Paris, said he saw the smoke while walking home. He was gripped by the sight of the falling spire, he said.

People reacted with audible gasps, but “most of them were just shocked silently,” he said.

“It’s awful to see such a symbol disappearing in front of you. It’s been there for so many years and in a few minutes half of it disappeared … crazy.

American tourist Jason Hinman was visiting a garden when he saw smoke in the air.

“We planned to leave the area, but eventually all the roads were blocked. It was clear the city had just stopped,” he said.

He said he walked toward the scene and stopped on a bridge in time to see the spire falling in a multicolored blaze.

“Several people covered their mouths. They couldn’t believe what they were seeing.”

He wandered the streets until he stumbled upon a group of people on their knees, singing and praying.

PATRICK ANIDJAR/AFP/Getty Images
Notre-Dame was completed in the 13th century.

Another witness, Anne Marie, spoke with tears in her eyes: “Paris without the cathedral is not Paris anymore.”

A symbol of France

Notre Dame’s foundation stone was laid in 1163 by Pope Alexander III, and the cathedral was completed in the 13th century. Today, with its towers, spire, flying buttresses and stained glass, Notre Dame is considered a feat of architecture as well as a major religious and cultural symbol of France.

Frédéric Soltan/Corbis via Getty Images
The Notre Dame cathedral in Paris as seen on December 20, 2015.

Located in Île de la Cité, a small island in the middle of the city, the cathedral is one of Paris’ most popular attractions, drawing an estimated 13 million visitors a year.

Even as it fell into disrepair over the centuries, it was the site of Napoleon Bonaparte’s coronation as emperor in 1804. The central spire was built in the 19th century amid a broad restoration effort, partly buoyed by the success of “The Hunchback of Notre-Dame” in 1831.

Philippe Lopez/AFP/Getty Images
A priest wipes the Crown of Thorns, a relic of the passion of Christ at the Notre-Dame Cathedral in Paris on April 14, 2017.

In addition to the Crown of Thorns, the cathedral also houses the grand organ, one of the world’s most famous musical instruments, and numerous artworks.

The Vatican said the Holy See lamented the devastation of a “symbol of Christianity” in France and beyond.

FRANCOIS GUILLOT/AFP/Getty Images
The cathedral is on an island in central Paris.

But to many in France, Notre Dame was more than a house of worship, said French author Bernard-Henri Levy. It’s a symbol of French culture, architecture and history.

“Notre Dame de Paris is really one of the beating hearts of the French civilization,” he said.